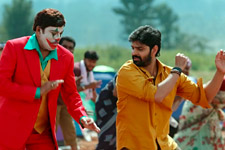 Anil Bandhakavi / fullhyd.com
EDITOR RATING
5.5
Performances
Script
Music/Soundtrack
Visuals
6.0
4.0
6.0
6.0
Suggestions
Can watch again
No
Good for kids
Yes
Good for dates
Yes
Wait to rent it
No
Most of us have played around with the question: if you had to choose one, would you be deaf, dumb or blind? It is a tough choice when you equally enjoy all three. For an artist, however, the inability to speak can be a curse, given the need for outward expression. Gaali Sampath, directed by Anish Krishna and starring Rajendra Prasad, shows the struggles of a man who's unable to release his creative imagination in the form of speech.

Gaali Sampath (Rajendra Prasad) is called so because he is mute and can only make sounds that resemble the release of air. A series of gasps is his only way of communicating with the people around him. His penchant for performance has him compulsively making attempts to earn a role in a local theatre show, but he is constantly rejected due to his disability.

One day he finds out about a contest at the local theatre for which the prize money is 8 lakhs. Sampath decides to contest with a solo act. He expresses his interest to the theatre's proprietor (Raghu Babu), who says that he will let him perform on the condition that he first deposits 5 lakhs. Meanwhile, Sampath's son (Sree Vishnu), who's a truck driver, is also in need of money to invest in a new truck, and differences inevitably arise, abetted by Sampath's inability to express himself verbally.

Rajendra Prasad masters the art of pantomime for this movie as a significant chunk of the story is just him expressing his emotions through gestures and facial expressions. An important part of the story is a situation in which he slips into a deep ditch that is within their home's compound, and he's unable to call for help. This segment of the movie is entirely a solo act in which Prasad displays his determination in scenes that look like they're taken from the show Man Vs Wild.

Although Prasad is an undoubted veteran of comedy, it would be interesting to know how he trained himself to introduce the exaggeration that's required when the verbal expression is removed. Sree Vishnu does well to complement Prasad's performance. Srikanth Iyengar and Anish Kuruvilla demonstrate their talents with ease in their own parallel saga which, ironically, serves as comedic relief from Gaali Sampath's situation, which is more of a comedic pathos.

The story struggles to get you invested emotionally as it vacillates between the comedy of Sampath's ways and the tragedy of his situation, ultimately delivering neither feeling to full effect. This, at least for an adult audience, is quite evident. Sampath's slapstick responses and his exaggerated expressions are however quite entertaining for the children in the audience.

Perhaps we should coin a new phrase, similar to an existing one that's always thrown around, to help you decide whether or not to pick this film: happy children, happy parents. 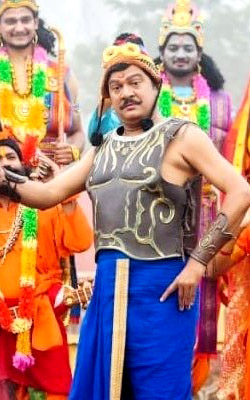 ADVERTISEMENT
This page was tagged for
Gaali Sampath telugu movie
Gaali Sampath reviews
release date
Rajendra Prasad, Sree Vishnu
theatres list
Follow @fullhyderabad
Follow fullhyd.com on
About Hyderabad
The Hyderabad Community
Improve fullhyd.com
More
Our Other Local Guides
Our other sites
© Copyright 1999-2009 LRR Technologies (Hyderabad), Pvt Ltd. All rights reserved. fullhyd, fullhyderabad, Welcome To The Neighbourhood are trademarks of LRR Technologies (Hyderabad) Pvt Ltd. The textual, graphic, audio and audiovisual material in this site is protected by copyright law. You may not copy, distribute, or use this material except as necessary for your personal, non-commercial use. Any trademarks are the properties of their respective owners. More on Hyderabad, India. Jobs in Hyderabad.