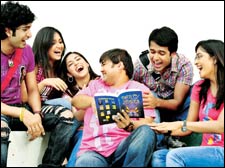 Deepa Garimella / fullhyd.com
EDITOR RATING
3.0
Performances
Script
Music/Soundtrack
Visuals
6.5
3.0
7.0
7.0
Suggestions
Can watch again
No
Good for kids
No
Good for dates
Yes
Wait for OTT
Yes
Our filmmakers don't realize this, but most "youth" movies are anything but. Nuvvila, aimed at being a sweet and young film, doesn't succeed at even connecting to its audience, even though it had the potential. This is because it is too busy being either juvenile or weird to be meaningful.

Still, this is hopefully a good break for the fresh faces cast in the film, since it is a Ramoji Film City production. The newcomers seem to know the fact, and give it a good shot - a fact that makes you cheer for them despite the movie being quite far-fetched.

The story is about 3 young men, who, while chasing dreams of their own, end up earning pocket money at the same Pizza Express outlet. They each have problems and ambitions, some of them girl-related.

Fresh college graduate Anand (Ajay) is in love with his neighbour Archana (Yami Gowtham), who is smitten by dashing cricketer Vishnu. Strangely enough, Anand's mother is pregnant. Not that this pregnancy has anything substantial to do with the overall import of the film - it's just a silly, uncomfortable prop to add to the parent-child relationship fundas that the makers want to thrust upon us.

Next up is Raju (Prasad Barvi), an aspiring violinist, and his jinx-who-eventually-becomes-girlfriend Rani (Ramya). Raju's inability to pronounce the "sa" syllable brings in a few laughs, even though the joke is repetitive. Lastly, Mahesh (Avish) wants to be a model, and he is being chased by a gay.

The movie gets its setting right - the characterization, the problems that its characters face, and the lingo. The comedy in some places is passable.

What is off-key is the twists and turns the lives of these youngsters take, including a completely unwarranted death. The film could have been a breezy walk in the clouds, if not for these awkward complications. Also, for a movie that tries very hard to be hep and "with it" and to connect to the problems of the youth, it is very insensitive to the homosexual community.

Speaking of which, the person who played the role of the gay is brilliant. He is exceptionally talented, and we certainly hope he makes it big.

In fact, all the performances are quite promising. They've all also dubbed for themselves, and despite their severe limitations in voice and accent, make an impact. Avish (who is among the few blessed with good diction0 is a perfect fit into his role as the aspiring model, and has the capacity to pull off comedy. Ajay's chocolate-faced boy-next door charm can be used in more films like these. The girls are all graceful, and act well.

The songs are, quite surprisingly, mellifluous. Not surprisingly at all, the film is mounted on a decent production scale, and the budget was clearly not a problem. The obvious Priya Pickles product placements aren't very bothersome.

A pretty-looking film but pretty avoidable, Nuvvila can be watched only if there's nothing else on television.
Share. Save. Connect.
Tweet
NUVVILA SNAPSHOT

ADVERTISEMENT
This page was tagged for
nuvilla film cast
Nuvvila
nuvvila movie Farah Bangalore
Nuvvila telugu movie
Nuvvila reviews
Follow @fullhyderabad
Follow fullhyd.com on
About Hyderabad
The Hyderabad Community
Improve fullhyd.com
More
Our Other Local Guides
Our other sites
© Copyright 1999-2009 LRR Technologies (Hyderabad), Pvt Ltd. All rights reserved. fullhyd, fullhyderabad, Welcome To The Neighbourhood are trademarks of LRR Technologies (Hyderabad) Pvt Ltd. The textual, graphic, audio and audiovisual material in this site is protected by copyright law. You may not copy, distribute, or use this material except as necessary for your personal, non-commercial use. Any trademarks are the properties of their respective owners. More on Hyderabad, India. Jobs in Hyderabad.