The Adventures Of Tintin (3D) Review 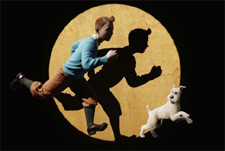 Priyanka Pulla / fullhyd.com
EDITOR RATING
7.0
Performances
Script
Music/Soundtrack
Visuals
8.0
5.0
6.0
9.0
Suggestions
Can watch again
Yes
Good for kids
Yes
Good for dates
Yes
Wait to rent it
No
First off, let's be clear about one thing - The Secret Of The Unicorn is made by a person who first discovered Tintin as an adult. To be precise, it is made by someone who discovered Tintin after he directed Raiders Of The Lost Ark. When a French review said Raiders was a nice homage to Herge, Spielberg got curious.

No wonder, then, that in the 2-dimensional, static panels of ligne claire created by Herge, Spielberg saw characters in popping 3D - textured, shaded and in blockbuster-style action. He saw cliffhanging set-pieces and edge-of-the-seat adventure.

His Tintin is, therefore, a full-fledged thriller, not Herge's subtle and layered comic adventure. It isn't anything like the books that kept thousands spellbound in childhood and into adulthood, and is - by no means - the Tintin film. It is only a re-imagining.

So, to Tintinologists around the world who were riled about the inaccuracies in Spielberg's tribute to Georges Remi, we have this to say - relax. This was never meant to be a faithful Tintin. In fact, it couldn't have been. For all of Spielberg's talk about attention to minute detail - he spoke of matching Herge's exact color palette, and being "sensitive to the diehard fans from the very beginning â€¦throughout every day of the shoot," - his Tintin is only a tribute to Herge's Tintin, an inspiration, a pastiche.

Face it - it's tough to remake the brightly-colored comic book in motion capture. So do yourself a favor, and leave the Tintin Nazi at home when you catch this one.

If you could put up with Guy Ritchie's Sherlock Holmes (where Doyle's celibate detective romances a voluptuous seductress), and Tim Burton's Alice In Wonderland (in which Johnny Depp plays a diabolical-looking Mad Hatter), you'll dig Indiana Tintin Jones, too. It's all good.

With that disclaimer in place, we proceed to pronounce Spielberg's Tintin completely satisfactory fare. Combining elements of multiple comics in a delirious mashup (Castafiore sings to Omar Ben Salaad in one scene, while Nestor serves Sakharine, and not the Bird Brothers), the film traces events from when Tintin stumbles upon a replica of the ship, The Unicorn, to the discovery of Red Rackham's treasure.

From the start, Spielberg's Tintin is high-energy fare. Herge's comics often began serene and unexcited, with Tintin and the Captain taking a walk in the woods, exiting a movie hall, or answering wrong numbers on the Marlinspike Hall phone. They were even seen making grand proclamations about giving up adventure. The film, though, starts off nervous and taut. The game is already afoot.

Guns blazing, Tintin (Jamie Bell) follows the mystery trail onto the ship of the captain (Andy Serkis), Karaboudjan. All along, fans will have to contend with some alien traits the film gives its characters.

As Indian readers of Tintin, many of us never imagined a Harry Potter accent on him. But, it turns out Spielberg did. Next, the Captain talks in - hold on to your hats - a Scottish accent. Nestor, instead of being the perfectly servile, sometimes blundering butler, has a supercilious streak about him. And Snowy doesn't talk, let alone wisecrack.

It's not all distorted, though. Some of Spielberg's own touches bring the characters alive. The Captain has a new habit of burping whiskey onto faces and into fuel tanks. It's toilet humor, and maybe not what you'd expect of Herge. Then again, Herge could be pretty slapstick. At any rate, you'll laugh in this somewhat scandalized way at how Spielberg is having fun with the film, if only sometimes.

In all the give-and-take, has Tintin won? We'd say yes. The real litmus test is, of course, if this Tintin appeals to someone who is not a Tintin fan. Say you don't really delight in Thomson and Thompson's spoonerisms, or Captain Haddock's drunken sabotaging of Tintin's plans - would it still wow you? Is it a great standalone film, minus all the references and nostalgia that tickles the buffs? We'd say - maybe not.

As fan art, it kicks ass. As the only film authorized by the Herge estate, it leaves you hungry.

Word of advice, though - when watching Tintin in India, try pushing up your 3D glasses. The colors are far brighter and closer to what you see in the comics. If the trailers are an indication, they are also the colors Spielberg intended, compared to the pall the glasses cast.
Share. Save. Connect.
Tweet
THE ADVENTURES OF TINTIN... SNAPSHOT
THE ADVENTURES OF TINTIN (3D) SNAPSHOT

ADVERTISEMENT
This page was tagged for
The Adventures Of Tintin (3D) english movie
The Adventures Of Tintin (3D) reviews
release date
Jamie Bell, Andy Serkis
theatres list
Follow @fullhyderabad
Follow fullhyd.com on
About Hyderabad
The Hyderabad Community
Improve fullhyd.com
More
Our Other Local Guides
Our other sites
© Copyright 1999-2009 LRR Technologies (Hyderabad), Pvt Ltd. All rights reserved. fullhyd, fullhyderabad, Welcome To The Neighbourhood are trademarks of LRR Technologies (Hyderabad) Pvt Ltd. The textual, graphic, audio and audiovisual material in this site is protected by copyright law. You may not copy, distribute, or use this material except as necessary for your personal, non-commercial use. Any trademarks are the properties of their respective owners. More on Hyderabad, India. Jobs in Hyderabad.