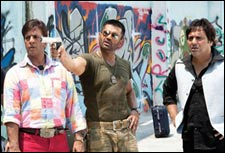 Nupur Barua / fullhyd.com
EDITOR RATING
4.0
Performances
Script
Music/Soundtrack
Visuals
5.0
3.0
4.0
5.0
Suggestions
Can watch again
No
Good for kids
No
Good for dates
No
Wait for OTT
No
Bollywood, as an industry, thrives on dishing out, month after month, cringe-worthy 'comic capers' that even the most passionate film buff gives a miss these days. With each new release, Andaaz Apna Apna, the mother of all nonsense, becomes an even more respectable classic, and Loot is no exception. And as for Jaane Bhi Do Yaaron, the grandmother of all comic capers in our country, it is sacrilegious to even mention it in reference to something like Loot, the latest four-guys-having-a-go-at-a-heist-formula movie.

The title credits sequence of Loot can be a bit misleading - it is all grungy with some weird Gothic song playing over it, and it is a montage of Mumbai visuals (in black and white, almost). The cohesiveness in the film can be judged from the fact that the plot almost immediately shifts to Pattaya, Thailand, almost never to come to Mumbai.

The setting in Thailand also paves the way for redundant wisecracks, racist remarks and other politically incorrect stuff. And yes, there is a tuk-tuk sequence, too. How refreshing!

Pandit (Govinda), Akbar (Jaaved Jaaferi), Builder (Suniel Shetty) and Wilson (Mahaakshay Chakraborty) are sent on a mission to Pattaya. Their boss is Batliwala (Dalip Tahil), a smuggler dealing with antiques and art. The four men, trying very hard to be boys, meet with Batliwala's contact Tanya (Shweta Bharadwaj), and they work out a plan to rob some random Johnson of his crores.

Pattaya is home to a league of dons. The godfather is Khan (Prem Chopra), and the ambitious Pakistani don Lala (Mahesh Manjrekar) is his favourite. Lala is one mean goon, and does not hesitate to break his own brother's limbs just to prove a point. So when the four idiots try to break into his house, they have no idea what they have let themselves into.

Singh (Ravi Kissen) is from the Indian Intelligence, and is openly staking out Lala, fearlessly. He, too, has a secret. With that perplexing plot firmly in place, enhanced by more actors than you can count on your fingers, Loot carries on for two hours, and not once does it make you laugh.

So there is Govinda, with his Bhojpuri accent, whose character would have been a priest if it were not for the world of crime. Sadly, he does not dance, and that is enough to turn his fans away. He does, however, display his evolution as an actor, towards the end.

Jaaved Jaaferi revives his father's Bhopali accent, and does a damn good job of it. Unfortunately, he looks the most bored of the lot.

Suniel Shetty growls and fumes. That is all. The icing on the cake is Mahaakshay Chakraborty, once known as Mimoh. He is bulkier than even Shetty, and looks pleased with his Bandra Catholic accent, punctuated stereotypically with 'Man'. If you can look past his Mimoh hairstyle, then you may notice how much like his mother he looks.

This is Mika's debut as an actor, and he does not disappoint, contrary to popular expectations. His presence in the movie does not make much sense, however. But worse is the case of Kim Sharma - what on earth is she even doing in the film (it was rumoured that she has retired)?

Mahesh Manjrekar fails to look threatening, but his portrayal of the long-suffering don, who has fools working for him, is bang-on. Prem Chopra is subtle. Deepraj Rana makes an impact, and Razzak Khan is underplayed.

No loud acting is the only saving grace in Loot. That, and the absence of the omnipresent man-in-a-gorilla-suit. However, what the makers have to realise is that laughing at languages that one does not understand is no longer funny. Nor is it politically correct to call senior citizens "the earth's burden".

Completely avoidable, Loot is a notch above Rascals, but that does not say much about the movie.
Share. Save. Connect.
Tweet
LOOT SNAPSHOT

ADVERTISEMENT
This page was tagged for
Loot hindi movie
Loot reviews
release date
Govinda, Suniel Shetty
theatres list
Follow @fullhyderabad
Follow fullhyd.com on
About Hyderabad
The Hyderabad Community
Improve fullhyd.com
More
Our Other Local Guides
Our other sites
© Copyright 1999-2009 LRR Technologies (Hyderabad), Pvt Ltd. All rights reserved. fullhyd, fullhyderabad, Welcome To The Neighbourhood are trademarks of LRR Technologies (Hyderabad) Pvt Ltd. The textual, graphic, audio and audiovisual material in this site is protected by copyright law. You may not copy, distribute, or use this material except as necessary for your personal, non-commercial use. Any trademarks are the properties of their respective owners. More on Hyderabad, India. Jobs in Hyderabad.