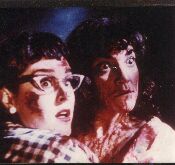 EDITOR RATING
7.0
Performances
Script
Music/Soundtrack
Visuals
NA
NA
NA
NA
Suggestions
Can watch again
NA
Good for kids
NA
Good for dates
NA
Wait for OTT
NA
If gore is what you want to see, then Peter Jackson's Brain Dead has enough for a lifetime. Some unbelievable happenings make you feel sick in the stomach. It needs to be watched in a proper theater, not the seedy ones screening it in town.

The film starts in Skull Islands, where a guy is killed by some local people, and the monkey (at least that's what they say it is) he had captured is sent to a zoo. Then the movie shifts to the Australian continent, where this movie was produced. All of a sudden we see a frump who is literally falling to pieces.

Now, if you watch the same reel as I did then you will never find out the reasons for it, 'cos they never show. However, a friend of mine, who watched it earlier, tells me that this monkey scratches the lady when she visits the zoo. So, we have our lady eating her ears as they fall into her pudding and, some time later, her son, John (Timothy Balme), pulls out her tongue.

Soon this lady dies and resurrects. She goes on killing people and turning them into zombies. John plays host to all of them. A couple of these errant ones even start copulating and then (hold your breath) reproduce. One of these two is a priest who says in his human avatar, "I kick ass for the Lord." What a fall!

The movie moves on inexorably towards a gory ending, with entrails and blood splattered everywhere. John has a girlfriend who helps him out in the cleaning act. It's a lot of work as the zombies kill people in a party thrown by John's uncle. Stay away from the ticket counter if you cannot handle your own nightmares. If you are seasoned in the genre and care for some good humor and zombie scenes, then you'll enjoy yourself.
Share. Save. Connect.
Tweet
BRAIN DEAD (DEAD ALIVE) SNAPSHOT

ADVERTISEMENT
This page was tagged for
Brain Dead (Dead Alive) english movie
Brain Dead (Dead Alive) reviews
release date
Timothy Balme, Diana Penalver
theatres list
Follow @fullhyderabad
Follow fullhyd.com on
About Hyderabad
The Hyderabad Community
Improve fullhyd.com
More
Our Other Local Guides
Our other sites
© Copyright 1999-2009 LRR Technologies (Hyderabad), Pvt Ltd. All rights reserved. fullhyd, fullhyderabad, Welcome To The Neighbourhood are trademarks of LRR Technologies (Hyderabad) Pvt Ltd. The textual, graphic, audio and audiovisual material in this site is protected by copyright law. You may not copy, distribute, or use this material except as necessary for your personal, non-commercial use. Any trademarks are the properties of their respective owners. More on Hyderabad, India. Jobs in Hyderabad.