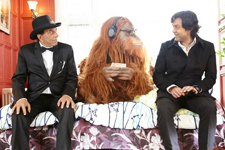 Deepa Garimella / fullhyd.com
EDITOR RATING
3.0
Performances
Script
Music/Soundtrack
Visuals
4.0
2.0
5.0
6.0
Suggestions
Can watch again
No
Good for kids
No
Good for dates
No
Wait for OTT
No
So Rajnikanth once taught a kid how to turn a tap on. The kid grew up to make a great career uprooting hand-pumps and scaring away the Pakistanis. And eventually, went and starred in one of the worst movies of all time.

But Sunny Deol isn't the only one you feel sorry for in Yamla Pagla Deewana 2, sequel to a surprise hit. The entire Deol clan seems to have been led up the garden path in terms of career advice, and the family seems desperately in need of some expert image consultancy. Because YPD2 is a badly-written, badly-acted, badly-executed piece of bunk that none of these people really deserves to be in.

YPD2 is one of those movies that were made just so you can realize the value of people like Priyadarshan. The only thing that could have made it worse would have been Kamaal Rashid Khan playing the role of the orangutan, but we suspect he already did that.

We suppose that the film is a sort of throwback to the '90s and the '80s, because it is cheesy as hell. The plot is incredibly silly, and centres round this father-son duo, Dharam (Dharmendra) and Gajodhar (Bobby Deol), who live in Varanasi and spend their lives cheating people off their money. The cleanest member of this family, Paramveer (Sunny Deol), lives in Scotland, where he lives life the good ol' fashioned hardworking way.

Dharam and Gajodhar are plotting to ensnare a millionaire, Yograj Khanna (why Annu Kapoor, why??), so that Gajodhar can marry his daughter, Suman (Neha Sharma). But very soon, Paramveer enters their picture.

The plot is extremely ludicrous, to say the least. At one point, Dharam, to further fool Khanna, decides to make Gajodhar play a set of twins, one of whom is called Q. And the Khanna family actually falls for this.

The entertainment here consists of endless Deol gags (of which a 2-second mention of an energy drink called "D'Ole" is easily the smartest), endless Salman Khan references, and - we wish we were kidding - an orangutan that runs a guest house and gets more screen time than Neha Sharma. Plus, one joke about Maggi or something.

Scenes are disjointed, the dialogues sad, and the dialogue delivery totally stilted. Characters are simply objects of convenience - there is no logic to what they do, say or think - to be moved around as the writers want them to. Meanwhile, there are so many respectful references to Salman Khan that the movie actually seems like a tribute to him.

In one scene, Dharam is so touched by the orangutan's affection that he immediately imagines the two of them singing the iconic Yeh Dosti... song. We didn't get it - are the Deols calling Amitabh Bachchan an orangutan? If so, the joke's on them.

There are two people, however, who give you respite - Anupam Kher, playing a villain who calls himself Dude; and Johnny Lever, who, along with a lady companion, keeps sauntering in in different costumes. Johnny Lever is hilarious in his imitation avatars, and Anupam Kher, despite his weird blond wig, seems far more intelligent than the rest of the characters put together.

Dharmendra tries being a sport, like that guy who knows the party sucks but wants to liven it up. He fails, miserably. Mostly because he looks like he's perpetually drunk. But in any case, it's immensely saddening that the erstwhile superstar has been reduced to this.

Bobby Deol, who must now realize that a little facial hair can go a long way in resurrecting careers, fails to entertain. Sunny Deol looks more dignified than the other two Deols. Annu Kapoor is reduced to being a ridiculous caricature, and he will regret this film, surely. And whoever was in the ape's suit had better not come out right away.

The songs are basically noise. The visuals are colourful, and that's about it. The fight sequences are overly exaggerated - think Sunny paaji roaring for a full 15 seconds and blowing away a few dozen goons with the power of his breath, and you get the idea.

In all, YPD2 is easily the last thing you should be considering this weekend. Except if you're Salman Khan. Or a Deol.
Share. Save. Connect.
Tweet
YAMLA PAGLA DEEWANA 2 SNAPSHOT 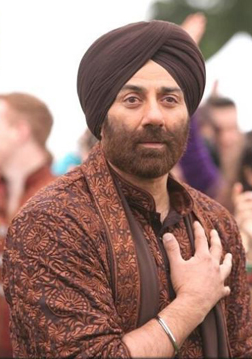 ADVERTISEMENT
This page was tagged for
Yamla Pagla Deewana 2 hindi movie
Yamla Pagla Deewana 2 reviews
release date
Dharmendra, Sunny Deol
theatres list
Follow @fullhyderabad
Follow fullhyd.com on
About Hyderabad
The Hyderabad Community
Improve fullhyd.com
More
Our Other Local Guides
Our other sites
© Copyright 1999-2009 LRR Technologies (Hyderabad), Pvt Ltd. All rights reserved. fullhyd, fullhyderabad, Welcome To The Neighbourhood are trademarks of LRR Technologies (Hyderabad) Pvt Ltd. The textual, graphic, audio and audiovisual material in this site is protected by copyright law. You may not copy, distribute, or use this material except as necessary for your personal, non-commercial use. Any trademarks are the properties of their respective owners. More on Hyderabad, India. Jobs in Hyderabad.