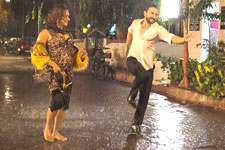 Daphne Rose / fullhyd.com
EDITOR RATING
6.5
Performances
Script
Music/Soundtrack
Visuals
9.0
6.5
7.0
8.0
Suggestions
Can watch again
Yes
Good for kids
No
Good for dates
Yes
Wait for OTT
No
2017 came to a fitting finish with the the black comedy Newton, but Kaalakaandi, another one of that genre, is as far removed from the country's nominee for the Oscars as can be. With Newton, the system was the problem; with Kaalakaandi, you discover that life itself can be a challenge when it decides to throw upon you one curveball after another.

That's something Saif Ali Khan's (unnamed) character is reeling under the immediate effect of when the movie opens. He's a well-heeled executive whose life comes crashing down around him when his doctor tells him he has stomach cancer and just three months more to live. While Khan brilliantly portrays the conflict of a man coming to terms with the abrupt ending of his life, the exchange between the doctor and patient as he goes on a "why me" rant sets the comic tone of the movie.

In an effort to cope, Khan decides to "drop" some acid, and starts to trip at the wedding of his cousin (Akshay Oberoi), in scenes showcasing some of the more visually arresting VFX you'd have seen in a long time.

Elsewhere, in a second track, there's the stunning Sobhita Dhulipala playing a grad student all set to move to Boston the same night for a PhD, and her boyfriend played by Kunaal Roy Kapur, whose greatest fear in life is *not* of the GF's move to a strange new country where she may or may not know anyone but of the white boys getting after his girl by the dozen. Seriously man, prioritize much?

Meanwhile, Deepak Dobriyal's and Vijay Raaz's small-time crooks hatch a plan to get rich with a little "investment" of their boss' money with an unforeseen conclusion (watch out for the "single goti" omelette played by a smashing Neil Bhoopalam in this segment - why we don't get to see more of this wonderful actor on the big screen is something the whole nation wants to know).

It is the narration of these three stories through the night with little to no connection to each other that forms the plot of Kaalakaandi. And brilliant performances by the ensemble cast, a story-telling format that keeps the viewers engaged, and the gorgeous visuals, especially the VFX in the scenes where Khan is tripping, elevate the narration. The former especially so - Kaalakaandi is made strong by the performances of some of the most underrated actors of the industry. Dobriyal and Raaz shine through in every scene they're part of, and their expletive-laden easy camraderie has much of the audience in splits. Dhulipala shows promise as a budding actress, getting the nuances of her character right even though her boyfriend in the movie, Kapur, needs to stop getting typecast in the role of the guy dating a girl that's way out of his league.

Ultimately, though, the movie belongs to Saif Ali Khan. Whether it's in the scenes where he's coming to terms with his new reality, or reeling under the effect of hallucinogenics, Khan appears like he is having more fun portraying the character than you are having fun watching him - which is saying a lot. His segment with the transgender prostitute Sheila (a very beautiful Nary Singh) whose "biology" he's curious about, leads to a heartwarming friendship, and a definite lesson to the Indian film industry on how to NOT use people outside the gender binary as mere comic props.

All in all, Kaalakaandi is a great ride. At an hour and fifty minutes long, the film tells its story effectively and without any side-tracking. Sure, there are some expectations in the second half that are not met - like the sudden excitement when you see Khan in a Birdman-like costume, only to see it lead nowhere - but that would be akin to nitpicking just for the heck of it. 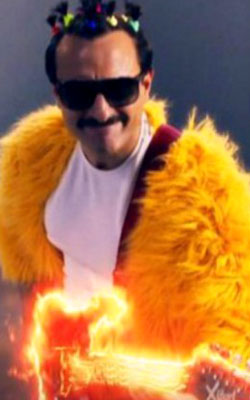 ADVERTISEMENT
This page was tagged for
Kaalakaandi hindi movie
Kaalakaandi reviews
release date
Saif Ali Khan, Sobhita Dhulipala
theatres list
Follow @fullhyderabad
Follow fullhyd.com on
About Hyderabad
The Hyderabad Community
Improve fullhyd.com
More
Our Other Local Guides
Our other sites
© Copyright 1999-2009 LRR Technologies (Hyderabad), Pvt Ltd. All rights reserved. fullhyd, fullhyderabad, Welcome To The Neighbourhood are trademarks of LRR Technologies (Hyderabad) Pvt Ltd. The textual, graphic, audio and audiovisual material in this site is protected by copyright law. You may not copy, distribute, or use this material except as necessary for your personal, non-commercial use. Any trademarks are the properties of their respective owners. More on Hyderabad, India. Jobs in Hyderabad.