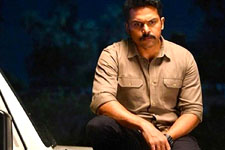 Sai Tulasi Neppali / fullhyd.com
EDITOR RATING
5.0
Performances
Script
Music/Soundtrack
Visuals
7.5
4.0
6.5
7.5
Suggestions
Can watch again
No
Good for kids
No
Good for dates
No
Wait for OTT
No
If your theatre companions are buried in their phones during Sardar, spare them the angry glares: They might be frantically googling terms like Sarcoidosis and Bisphenol A, or going down a Wikipedia rabbit hole about the Cochabamba Water Wars of Bolivia. Because Sardar is not really a movie - it's a stack of PSAs in a trenchcoat trying to pass off as a movie.

Sardar's theme? The corruption of mother nature's greatest resource: Water. "He who controls water, controls the world," says the movie's villain Rathore (Chunky Pandey), a government spy-turned-businessman who is on the verge of privatizing the entire country's drinking water supply. He rallies the public behind his quasi-nationalist motto "One nation, One pipeline", echoing the Modi government's go-to template for unification efforts across India (one ration card, one voter list, one fertilizer).

Standing up to Rathore's schemes is a water rights activist Sameera (Laila), whose son's terminal diagnosis of Sarcoidosis - apparently caused by drinking from plastic water bottles - awakens her to the corrupt ways in which water is procured, packaged and sold in India.

When Sameera organizes a protest against Rathore's company, she crosses paths with inspector Vijay Prakash (Karthi) and his lawyer-girlfriend Shalini (Rashi Khanna). Vijay is the police department's cool cop, praised by his higher-ups for his ability to make his arrests go viral on Twitter (#OneManArmy and #SuperCopVijayPrakash). But despite his celebrity status, a dark cloud hangs over Vijay for he is the son of a branded traitor?-?a one-time Indian spy codenamed Sardar.

There is much speculation about Sardar's past and his current whereabouts. And a faint sense that he has an antagonistic relationship with Rathore. Ever since Sardar's arrest, his few remaining allies have gone underground, conversing with each other in cryptic whispers. They use disposable SIMs, talk in Morse code, send anonymous texts, and meet face-to-face only on railway platforms. All these cloak-and-dagger tactics give the movie the feverish pace of a spy thriller.

But the first half is still more like an awareness campaign: A doctor tells a teary Sameera that her son's inflammatory lung disease is caused by BPA-leaching water bottles. His warning is reminiscent of those mandatory pre-movie ads about the horrors of gutka and cigarettes, with one major difference: there is little real-world evidence linking a multi-causal disease like sarcoidosis with BPA.

Indeed, director P S Mithran's passion for this topic is abundantly clear, but the research behind the script is so shoddy and devoid of nuance that it borders on reckless. Rather than a mindful revelation about the world's drinking water crisis, Sardar resorts to the scaremongering tactics of a Whatsapp forward to drive home its point: "Throw away your plastic water bottles or YOUR CHILD MAY DIE; Protest privatization or THE COUNTRY IS DOOMED!"

Lest all this social messaging dampen the mood, the movie makes use of spies and suspense to try to dress up the story. It is injected with all sorts of mass tropes, including the biggest trope of all: a superlative hero figure. Sardar (also played by Karthi) speaks 24 languages and holds eight passports. He is introduced as an inmate of a Bangladeshi prison, feared and respected even by the guards, and he is apparently a captive of his accord. In his heyday as an Indian government spy, Sardar was a master of disguise, successfully completing a critical mission in Pakistan and uncovering an anti-India scheme involving China.

Through Sardar's backstory, the movie also brings in a familiar sub-plot about Indian nationalism: how India is a paragon country, and its bad actors are exclusively backed by our enemies (China). One of the first scenes of the movie takes place inside the International Court of Justice where India argues a case against China over its construction of dams over the Brahmaputra - and, of course, wins it.

Unfortunately, amidst Sardar's madly intersecting storylines, the issues at the heart of the movie never get their due. Instead, the script stuffs in documentary-style stock footage every time it wants to convey a social message, before flipping back to the high-octane stunts and the song and dance. Its most pressing questions are unanswered, and its most interesting ideas are barely explored.

Only Karthi's charm and earnest acting save the movie from being utterly bankrupt of sanity. Karthi's avatar as the older, bearded, grave-faced Sardar is especially useful in making us forget the schizophrenic plot. Chunky Pandey as Rathore is such a cartoonish caricature of a greedy industrialist that he never stands a chance against either Karthi's Sardar or Karthi's Vijay.

Mithran may feel smug about stuffing the story with so many elements. Sardar is a spy thriller, a crime-based action film and a social awareness movie all rolled into one. But the result is a too-loud, too-fast, too-full-of-itself chimerical freak. 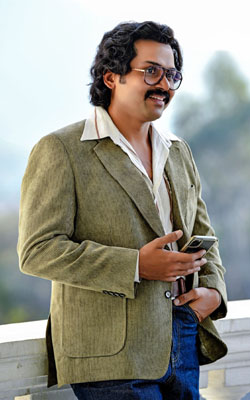 ADVERTISEMENT
This page was tagged for
Sardar telugu movie
Sardar reviews
release date
Karthi, Raashii Khanna
theatres list
Follow @fullhyderabad
Follow fullhyd.com on
About Hyderabad
The Hyderabad Community
Improve fullhyd.com
More
Our Other Local Guides
Our other sites
© Copyright 1999-2009 LRR Technologies (Hyderabad), Pvt Ltd. All rights reserved. fullhyd, fullhyderabad, Welcome To The Neighbourhood are trademarks of LRR Technologies (Hyderabad) Pvt Ltd. The textual, graphic, audio and audiovisual material in this site is protected by copyright law. You may not copy, distribute, or use this material except as necessary for your personal, non-commercial use. Any trademarks are the properties of their respective owners. More on Hyderabad, India. Jobs in Hyderabad.