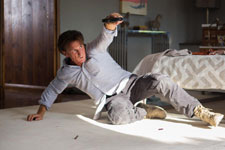 Kritika Deval / fullhyd.com
EDITOR RATING
3.5
Performances
Script
Music/Soundtrack
Visuals
4.5
2.5
2.5
4.0
Suggestions
Can watch again
No
Good for kids
No
Good for dates
No
Wait to rent it
No
The thing about The Gunman is that you tend to get occasionally disoriented when you realize that the old man picking off opponents like it ain't no thang on the screen, is not Liam Neeson. This is a realization this film forces on to the viewer once every few minutes, and it gets awkward. Like if your sister just introduced you to her new boyfriend and you keep having the urge call him by the ex's name.

So, Jim Terrier (Sean Penn, unfortunately not emitting yips and barks in lieu of dialogue) is an assassin in the Democratic Republic of Congo in the year 2006 on behalf of the CIA. For someone who's sole reason for being there is to further destabilize an already ailing nation, Terrier is pretty chill. He surfs and drinks and gets it on with the Madonna-like Dr. Annie (Jasmine Trinca).

That last bit sticks in the craw of Felix (Javier Bardem), one of Jim's teammates, who is obsessed with Annie. He even goes so far as to arrange it so Jim makes the killing shot, secure in the knowledge that Jim will have to leave the country.

Fast-forward to 2014, and Terrier is back in Congo with the intention of doing a little sumpin' sumpin' for the locals to make amends. However, somebody doesn't want him doing that, and communicates their dissatisfaction with Terrier's existence via a volley of people with guns. Terrier, of course, makes quick work of these hapless folks, and goes off gallivanting through Europe only to finally end up in Spain where he discovers that Felix, that douche from earlier, is now a super-successful businessman, and is married to Annie.

Jim now has to figure out who wants to kill him, how to get Felix out of the picture, and how to stay alive so he can make amends with Annie. Also, by this point, most of those watching have probably dozed off. This writer swears she heard at least a few snores ringing through the sparsely-populated theatre.

There has been a weird trend lately of tired old men kicking tired old ass on the celluloid. For the most part, this tends to work because most of these films tend to possess an almost post-modernist sense of irony. Neeson has schitck that's adorable because of his sincerity, while Schwarzenegger is made bearable by filmmakers who seem to get that there's only so seriously anybody can take this giant Austrian flesh robot.

The Gunman, on the other hand, is its own biggest fan, and doesn't need our accolades. It takes itself far too seriously, without being sincere about it. Fight scene after fight scene is executed with a bored cynicism that should've been reserved for the lead. Each of the characters is a caricature of a caricature, which is doubly tragic in a film that fully populated by top-notch performers.

Liam Neeson ...oops, Sean Penn (see? we did it again.) is an earnest, bored mess who's just going through the motions, and is inexplicably topless. Jasmine Trinca is gorgeous, and has been saddled with a shockingly deficient character. Javier Bardem will probably do all in his power to downplay his role in this one.

The action is predictable and pointless, along with being boringly shot. The camerawork is alright, with just a few scenes that end up looking good, and the background score is as much a pinnacle of mediocrity as the rest of the film.

The sheer banality of The Gunman makes us wonder if this was ever meant for people to watch. Maybe it was just meant as a cookie-cutter for old-people-starring action films, in which case there's no need for you to watch it.
Share. Save. Connect.
Tweet
THE GUNMAN SNAPSHOT 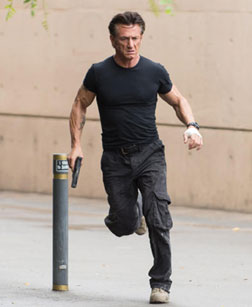 ADVERTISEMENT
This page was tagged for
The Gunman english movie
The Gunman reviews
release date
Sean Penn, Jasmine Trinca
theatres list
Follow @fullhyderabad
Follow fullhyd.com on
About Hyderabad
The Hyderabad Community
Improve fullhyd.com
More
Our Other Local Guides
Our other sites
© Copyright 1999-2009 LRR Technologies (Hyderabad), Pvt Ltd. All rights reserved. fullhyd, fullhyderabad, Welcome To The Neighbourhood are trademarks of LRR Technologies (Hyderabad) Pvt Ltd. The textual, graphic, audio and audiovisual material in this site is protected by copyright law. You may not copy, distribute, or use this material except as necessary for your personal, non-commercial use. Any trademarks are the properties of their respective owners. More on Hyderabad, India. Jobs in Hyderabad.