Ready Or Not Review 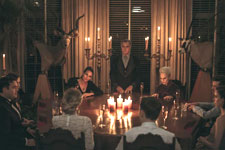 Oh, she also happens to be wearing Converse All Stars, and has a large shotgun in her hand, and multiple rounds of ammunition strapped to her chest. Indeed, Samara Weaving's iconic deconstructed wedding gown captures the very essence of Ready Or Not. Directors Matt Bettinelli-Olpin and Tyler Gillett, and executive producer Chad Villella, part of a group called Radio Silence, deftly present a sharp, pacy thriller that edges more towards comedy than horror, and gives you a pretty decent weekend outing.

Grace (Samara Weaving) is married to Alex Le Domas (Mark O'Brien), and is excited to finally have a family of her own, having lived in foster care all her life. The only problem here is that she is married into the eccentric and filthy rich Le Domas gaming dominion ("Gaming Dynasty? Empire?" she asks, but gets told they prefer "Dominion").

There's just one slight ritual that needs to be taken care of. Every new addition to the family does it, assure the Le Domases. Grace would have to draw a card and play the game indicated. The game she draws is Hide And Seek, and on comes the madness. The entire Le Domas family participates in a macabre version of cat and mouse, one in which there are going to be no winners.

The plot is not too original, and the "And Then There Were None" style of execution, no pun intended, makes it a little predictable. The climactic interaction between the bride and her bridegroom is perhaps the best example of this. That being said, Ready Or Not moves at a blistering pace, and is done within 95 minutes, so nothing feels drawn out.

Ready Or Not has a surprising number of things going for it. It is for sure the most fun "horror" movie we've had in quite some time. For someone who doesn't particularly enjoy gratuitous violence in cinema, Ready Or Not's approach to violence can sometimes feel like that of Kill Bill that tempers its own brutality. And in other moments, it uses a trick straight out of the Shaun Of The Dead playbook - where the absurdity of the situation takes precedence over its gory aspect.

The film has a cutting underlying social commentary running parallel to the story, which seems to mirror the public sentiment in the West in today's world. The callousness of "old money" is a fantastically done recurring joke that manages to get you to mix disbelief with a chuckle every single time. The lengths to which the rich can go to protect their wealth, with complete disdain for the value of human life, is a statement that resonates with everyone (except the filthy rich, of course), and it indeed makes them despicable, as Ready Or Not constantly affirms. The way the domestic help, including multiple housemaids and a butler, are treated (read: disposed of), however, takes away from this message.

Samara Weaving is easily the show stealer, with her effortless transition from hopeful bride to hardened survivor a joy to behold. Adam Brody as Daniel, the dispirited older brother of the groom who doesn't approve of his family's ways, is memorable, but he has a tragically short role with very few lines. The rest of the cast deliver great performances, causing you to sometimes hate the Le Domas clan, but mostly just stare in disbelief at their shenanigans.

The music by Brian Tyler has its special moments - like the hunting song that looms over the whole spectacle. In most places, though, the score is too forceful, and the strong accompanying background music sometimes takes the sting out of some otherwise thrilling scenes.

The aforementioned tune, "Here Comes The Bride", comes from Wagner's opera Lohengrin, and is played just before the groom Lohengrin murders five wedding guests and leaves the heroine, Elsa. With context, quite an apt way to start talking about Ready Or Not, isn't it?

By the end of the movie, the entire audience in the cinema was grinning from ear to ear. Also, the very last dialogue elicited a very uncharacteristic giggle from yours truly. Purely on the basis of that, Ready Or Not is an easy recommendation.
Share. Save. Connect.
Tweet
READY OR NOT SNAPSHOT 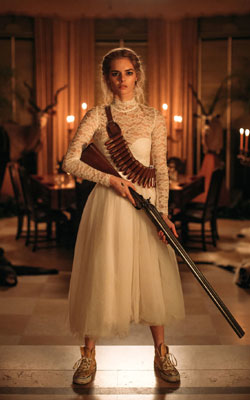 ADVERTISEMENT
This page was tagged for
Ready Or Not english movie
Ready Or Not reviews
release date
Samara Weaving, Adam Brody
theatres list
Follow @fullhyderabad
Follow fullhyd.com on
About Hyderabad
The Hyderabad Community
Improve fullhyd.com
More
Our Other Local Guides
Our other sites
© Copyright 1999-2009 LRR Technologies (Hyderabad), Pvt Ltd. All rights reserved. fullhyd, fullhyderabad, Welcome To The Neighbourhood are trademarks of LRR Technologies (Hyderabad) Pvt Ltd. The textual, graphic, audio and audiovisual material in this site is protected by copyright law. You may not copy, distribute, or use this material except as necessary for your personal, non-commercial use. Any trademarks are the properties of their respective owners. More on Hyderabad, India. Jobs in Hyderabad.