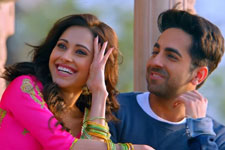 T J Reddy / fullhyd.com
EDITOR RATING
6.0
Performances
Script
Music/Soundtrack
Visuals
8.0
4.0
5.0
6.0
Suggestions
Can watch again
No
Good for kids
No
Good for dates
Yes
Wait for OTT
No
Before we begin, we would like to tell you a joke by Jimmy Carr. It goes like this: "I met my first wife when I was in Thailand. She passed away recently ...due to testicular cancer." Ha Haa Ha. Ha Haa Ha.

Tucked away in the shadow of Delhi is the small town of Gokul, and in this town lives Karam (Ayushmann Khurrana). He is a listless young man who is in possession of some particular skills but isn't possessed by employment. However, his unique talents find a home at a workplace that offers him gobs of money. He signs a contract without reading it and takes the money in one quick swoop. He soon gets engaged and chooses to leave his double life behind.

But Karam seems to have not watched Ayushmann's star-making turn in Vicky Donor. One doesn't just walk away when working a questionable job. One can and will be dragged into the mire of Indian morality when choosing said dubious profession. The profession in question here is the call centre side of a "friendship hotline". Karam masks his voice and plays Pooja. A mild-mannered belle who captures the hearts of many a man in Gokul. Soon enough, these lonely men and one woman fall in love with this phone "friendship" operator, and choose to wed and bed her. Before and post this point, hijinks ensue.

Jimmy Carr again, ladies and gentlemen. "I met my first wife when I was in Thailand. She passed away recently ...due to testicular cancer." Ha Ha. Ha Ha.

While the worst hijinks in Dream Girl are reminiscent of bad Comedy Nights sketches (sans Siddhu's grating laughter) and the best hijinks were pulled straight out of sequences from Chachi 420, the through-line tying them all together is the central conceit of four men and a woman falling in love with a man in the guise of a woman. This conceit is the film's first joke, and the film's only joke for most of its runtime. Karam plays the character of Pooja, finds a client, impresses both the client and his boss based on his knowledge of one-dimensional men and how their minds work, brings in big business, and profits ensue. While the characters seem to be getting their happy endings, all the audience is left with is comedy's version of blue balls thanks to being subjected to the same brand of humour time and time again.

What the movie fails to explore is its wide array of characters. Take, for example, Nushrat Bharucha's turn as Karam's fiancée Mahi. Karam and Mahi share a scene in the third act of the film that has him reveal his parallel life to her. His reasons for doing what he is doing begin and end with one line. Mahi smiles, understands his goals, and forgives him for hiding his secrets from her all in the matter of a split second. What we are made privy to is the fact that Mahi's and Karam's foundation is trust and respect for one another. They understand that people make mistakes and that those mistakes don't define who they are. A laudable lesson, indeed.

But what the audience doesn't see is the origin of this trust between them. The whole courtship begins and ends with one montage and one and a half conversation. Add to this the fact that Karam learns everything he knows about relationships by peeking into the personal lives of his clients, and we have a moral that remains unearned in any sense of the word.

Jimmy Carr returns ladies and gentlemen. "I met my first wife when I was in Thailand. She passed away recently ...due to testicular cancer." Ha. Ha.

But comedy is as much about timing and delivery as it is about writing. Dream Girl's most significant win comes in the form of its cast. Present-day Golden Boy Ayushmann, seasoned comedic leading lady Nushrat Bharucha, a pitch-perfect Annu Kapoor, a quite hilarious Vijay Raaz, a sparkling return to the screen by a welcome Abhishek Banerjee, and Raj Bhansali playing an annoying f***boy make for a rib-tickling comedic ensemble. Sequences that have one or more of these actors interacting with each other are what bring a likability to a script that was done to death a few decades ago.

However, the film drops its ball with the character of Roma (Nidhi Bisht). Roma is a woman who hates all men based on her three failed relationships. She chooses to explore her sexuality by dating a woman for a change, and let's have no doubts about it, Karam catfishes men by putting on the voice of a woman on a phone-sex line. Dream Girl had a chance to explore both Karam's and Roma's fluid sexuality. However, this movie takes the easy way out by just having its leading man dress in drag and lecture people about loneliness, and not do much else.

The film could have had Roma be a closeted lesbian whose relationships with men fail as a result of her suppressing her sexuality, but Dream Girl takes the easy way out by lecturing her about not making blanket assumptions about all men and not doing much else with her character. This lack of ambition is in line with Dream Girl's choice of safe and peppy music and the sitcom-y cinematography. The motivations of the filmmakers start to fall off quicker than Karam's saree when one chooses to make a small tug and look behind the curtain. Choli ke peeche kuch nahin hai, indeed.

Jimmy Carr's encore ladies and gentlemen. "I met my first wife when I was in Thailand. She passed away recently ...due to testicular cancer." Hmm. A joke stops being funny when one hears it for the fourth time in a row.

Dream Girl, too, is quite like the joke above. If you were to deduct the actors telling these jokes from the equation, this movie is no better or worse than an hour of The Kapil Sharma Show. Sunil Grover might have made his choices, but the audiences have kept the show on the air. People may genuinely want to watch something that allows them to switch their brains off from time to time, and learn a decent moral even if the narrative supporting it is hackneyed. We may dream of braving the Amazon from time to time, but our local park will have to suffice daily. But what do we know? We, too, just repeated a tired joke four times.
Share. Save. Connect.
Tweet
DREAM GIRL (2019) SNAPSHOT 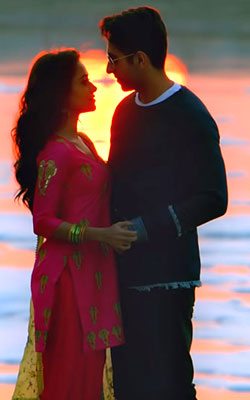 ADVERTISEMENT
This page was tagged for
dream girl full movie in hindi
film dream girl
full movie dream girl
hindi movie dream girl review
dream girl full movie
Follow @fullhyderabad
Follow fullhyd.com on
About Hyderabad
The Hyderabad Community
Improve fullhyd.com
More
Our Other Local Guides
Our other sites
© Copyright 1999-2009 LRR Technologies (Hyderabad), Pvt Ltd. All rights reserved. fullhyd, fullhyderabad, Welcome To The Neighbourhood are trademarks of LRR Technologies (Hyderabad) Pvt Ltd. The textual, graphic, audio and audiovisual material in this site is protected by copyright law. You may not copy, distribute, or use this material except as necessary for your personal, non-commercial use. Any trademarks are the properties of their respective owners. More on Hyderabad, India. Jobs in Hyderabad.