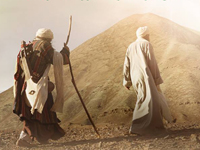 Nupur Barua / fullhyd.com
EDITOR RATING
6.0
Performances
Script
Music/Soundtrack
Visuals
6.0
6.0
7.0
8.0
Suggestions
Can watch again
Yes
Good for kids
Yes
Good for dates
No
Wait for OTT
No
Religion is a sensitive business for some. It is a well-known fact that Sikhs and Muslims do not encourage, or endorse, a human being depicting their respective prophets. In The Message, a 1976 movie based on the life of Mohammed the Prophet, the Prophet himself was never shown, nor was his voice heard. Nanak Shah Fakir, however, does give Guru Nanak a voice, and a presence, even though you never see his face, and that may be one of the reasons that certain sections of the community have asked for a ban on the film.

Nanak is born to a Hindu family in the small village of Talvandi, now in Pakistan. His sister, Bebe Nanaki, immediately becomes his best friend, and the only person who really understands him. As the child grows into a boy, he exhibits a wisdom that stuns his teachers, and confuses his father. Not understanding the potential his son has, Mehta Kalu, a local patwari or accountant, wants young Nanak to follow in his footsteps. The local landlord, Rai Bular, understands that the child is destined for bigger things, especially when he refuses to sit for a thread ceremony.

When Bebe Nanaki is married to Jai Ram, a patwari at the bigger city of Sultanpur, Rai Bular arranges for Nanak to get a job there as well. Eventually, Jai Ram arranges for him to marry Sulakhni, the daughter of a family friend, and the couple have two sons, Sri Chand and Lakshmi Chand. Nanak had also befriended a Rebab (a stringed instrument) player, Mardana, during Bebe Nanaki's wedding. Mardana becomes his loyal follower, and accompanies him wherever he goes.

At the age of 30, Mardana finds Nanak's discarded clothes near the river, and he is presumed drowned. When he reappears three days later, his first words exhibit his enlightenment, when he says that there is neither Hindu nor Muslim, and that there is only one God - Ik Omkar. He then travels, along with Mardana, over thousands of kilometres in all four directions, spreading the message of God and visiting various religious heads. These journeys are known as Udasis, and although he went home to visit his family in between, he made it his mission to teach people the meaning of peace, and of God, especially since he knew that violence and bloodshed were just around the corner (with the coming of Babur).

The script sticks to the basic story of Guru Nanak, from his childhood to his advanced years. It emphasises on the connection between Bebe Nanaki and her brother, and gives her equal importance in the journey of the great seer. Bebe Nanaki became Guru Nanak's first follower, and the screenplay gives her the prominence due to her.

The story does not assume to let us know what Guru Nanak is thinking or feeling on a personal level. It is more about how he influences and inspires the people around him, especially his sister and Mardana. The emotional journey that his parents go through while they, especially his father, struggle to come to terms with the fact that their son is no ordinary mortal, is handled with apt sensitivity. Mardana provides some humour, now and then - otherwise, Nanak Shah Fakir is a movie filled with loaded messages and serious contemplation.

There are some surreal aspects that are never explained, such as the yak that attacks Mardana, who is then saved by a white bull, or the philosophical leper whose skin clears as he speaks of his sins, or the ancient men who live in a cave in the Himalayas. These are to be digested as they are depicted - there is no room for religious debates or controversies, and you enter the theatre knowing that you cannot find fault with the tribute that the movie pays to Guru Nanak. You are expected to leave all your cynicism and disbelief at home.

The movie is liberally peppered with songs of Nanak Shah Fakir, and these songs speak mostly of the need for one God to overcome the strife and struggles that the world is going through.

The person who plays Guru Nanak is never seen, and although his voice is heard, he speaks rarely, preferring to pass on his teaching through songs. Arif Zakaria as Mardana is the narrator of this story, and through him, we understand the enigma that is Guru Nanak. The actor displays the appropriate devotion required for the role. Adil Hussain has a smaller, but very important, role as Rai Bular, and he plays it with perfection. Tom Alter is hardly recognisable till you hear his diction, and he is convincing.

The film excels in its production design and costumes. The sets are detailed and represent, authentically, the period in which the story is set. Some of the real locations, such as Talvandi and Sultanpur, and even smaller villages, look exactly like they must have in the 15th and 16th centuries.

The movie has some stunning visuals, especially when it comes to the travels around the land. The colours are all warm and welcoming, even when the film depicts tragedy. The sequence of the Battle Of Panipat has been shot very well. The special effects are also at par with most international standards, but the glow around the protagonist could have been slightly less bright.

The music is mostly devotional, and the subtitles explain what they mean. The film is lengthy, and, more often than not, philosophical, and the editing honours that.

Nanak Shah Fakir, despite the controversies that surround it, is an inspirational movie, and even nostalgic. It reminds you that there were men willing to go the distance to make our world better, and to help you see that light. Watch it for the message.
Share. Save. Connect.
Tweet
NANAK SHAH FAKIR SNAPSHOT 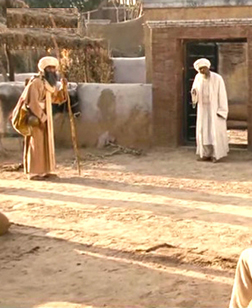 ADVERTISEMENT
This page was tagged for
Nanak Shah Fakir hindi movie
Nanak Shah Fakir reviews
release date
Arif Zakaria, Puneet Sikka
theatres list
Follow @fullhyderabad
Follow fullhyd.com on
About Hyderabad
The Hyderabad Community
Improve fullhyd.com
More
Our Other Local Guides
Our other sites
© Copyright 1999-2009 LRR Technologies (Hyderabad), Pvt Ltd. All rights reserved. fullhyd, fullhyderabad, Welcome To The Neighbourhood are trademarks of LRR Technologies (Hyderabad) Pvt Ltd. The textual, graphic, audio and audiovisual material in this site is protected by copyright law. You may not copy, distribute, or use this material except as necessary for your personal, non-commercial use. Any trademarks are the properties of their respective owners. More on Hyderabad, India. Jobs in Hyderabad.