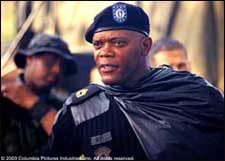 Deepa Menon / fullhyd.com
EDITOR RATING
1.0
Performances
Script
Music/Soundtrack
Visuals
NA
NA
NA
NA
Suggestions
Can watch again
NA
Good for kids
NA
Good for dates
NA
Wait to rent it
NA
Ever had anyone give you a ‘humorous’ birthday gift which looks all big and exciting and is tied in a fancy red bow, but once you start to unwrap it it’s just a bundle of newspapers and confetti with a rotten tomato in the centre? You’ve been had! Ha ha, isn’t that funny? Isn’t that really and truly side-splittingly funny and brilliant? Isn’t that the king of party jokes? Isn’t it, huh? Isn’t it? ISN’T IT?!

See now with that intro we just saved you around 35 bucks. Why go to a theatre and be annoyed when we can do that for you right here, in the comfort of your own chair? The scriptwriter of Basic will have you wade through almost two hours of a vagueoid plot, just so he can pull a scummy trick on you in the end. Actually, they’re all scummy. And there are a lot of tricks.

You see, he (the scriptwriter, in case you weren’t paying attention) is so pleased, just so gosh-darned thrilled with the idea of a twist in the tale, that he has joyfully incorporated around 50 of them in the plot. The whole point is to convince you that what you see is never what you get. For example, you’d hear about a movie like this and you’d think, “Hmm. John Travolta and Samuel L Jackson, this must be a good movie.” Suckers!

Basic is the story of a tough negotiator (Travolta as Tom Hardy), a good cop (Nielson as Lt. Osborne), and a drug smuggling deal in the Panama Canal (under the benevolent eye of the US Military). The Canal is the sort of place that has always “found a way to profit from death”. So when Sgt. Nathan West (Samuel L Jackson) and most of his team of Army Rangers are found killed during a basic training camp in the jungle, the sole survivors are the prime suspects and the only link to the whole mess. Only they won’t talk.

So Tom Hardy is called up from the dregs of disgrace where he’s currently residing to be the ‘unofficial’ interrogator. Tom is officially on a break from his post at the Drugs Enforcement Agency thanks to a bribery scam, but he keeps assuring you he was framed. Travolta as Hardy talks dirty, scratches himself, hits on the unresisting Lt. Osborne, and manages to be as lovable as ever.

What he and Osborne manage to wrangle out of the two survivors, Dunbar (Brian Van Holt) and Kendall (Giovanni Ribisi), leads them into a messy web of personal vendetta and what turns out to be a massive drug trafficking operation within the Army. Sgt. West is the toughest, meanest leader of the Rangers, and his personal charm doesn’t exactly endear him to his men. So nobody’s really surprised when he’s killed during the jungle camp. The murder of the rest of the cadets, however, is a bigger mystery.

But Dunbar and Kendall, both of whom seem to have a personal stake in the business, can’t seem to get their stories straight. For most of the movie you’re taken through wildly differing versions of what really happened that fateful night. The rain-soaked atmosphere maintained almost throughout the film is ideal for intrigue, and everybody from Samuel L Jackson to Harry Connick Jr. (a drug-peddling doctor) does a good job. But the story itself stinks to the high heavens so there’s not much hope really.

To the credit of the director, you are kept interested for a good part of the first half of the film. Then things get so mangled, so ridden with conspiracy that you don’t know what he’s going to pull out of the hat next, and by the end, you really, truly don’t care. And given the superbly ludicrous ending, this can only be a good thing.
Share. Save. Connect.
Tweet
BASIC SNAPSHOT

ADVERTISEMENT
This page was tagged for
Basic english movie
Basic reviews
release date
John Travolta, Samuel L Jackson
theatres list
Follow @fullhyderabad
Follow fullhyd.com on
About Hyderabad
The Hyderabad Community
Improve fullhyd.com
More
Our Other Local Guides
Our other sites
© Copyright 1999-2009 LRR Technologies (Hyderabad), Pvt Ltd. All rights reserved. fullhyd, fullhyderabad, Welcome To The Neighbourhood are trademarks of LRR Technologies (Hyderabad) Pvt Ltd. The textual, graphic, audio and audiovisual material in this site is protected by copyright law. You may not copy, distribute, or use this material except as necessary for your personal, non-commercial use. Any trademarks are the properties of their respective owners. More on Hyderabad, India. Jobs in Hyderabad.