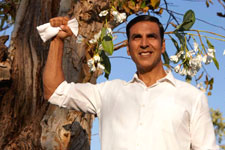 Josh / fullhyd.com
EDITOR RATING
6.0
Performances
Script
Music/Soundtrack
Visuals
7.0
5.0
5.0
8.0
Suggestions
Can watch again
No
Good for kids
No
Good for dates
No
Wait for OTT
Yes
It is rated a six because it is watchable. Because you aren't likely to get up in between and leave the hall. And because Akshay Kumar can be both adorable and competent enough to carry a film on his broad shoulders with a goofy grin. And because P C Sreeram can make the world look beautiful no matter what populates that world.

But the six has little to do with Arunachalam Muruganantham, the man whose mad, mad story Padman tries to tell. That story could easily have been an eight. And in the right hands with the right inspiration it could have been a nine or even a nine and a half.

What is so nine and a half about him, you ask? He was worried for his wife when he learnt that she used a dirty rag as an absorbent napkin during her periods. His worry propelled him to get her a sanitary pad from the medical store. She reprimanded him for wasting so much money that they might have to forgo all dairy for the household if they took to such expensive menstrual health material. So what did he do? He created sanitary pads himself. Cheap, hygienic and utterly revolutionary pads.

Give it a thought. An obsessed man - a semi-literate workshop worker - who was ridiculed and ostracised by his family and his whole village, and even left by the very wife whose health he was so concerned about, but who nevertheless managed to design and create hygienic low-cost sanitary pads sparking off a self-help revolution whereby lakhs of Indian women found jobs and millions found safe sanitary pads.

This, in a country where invention and scientific achievement is considered to be a government job in ISRO. If you think that's putting down India too much, we recommend you try to replace a village's streetlights with LED lamps to get a wealth of experience and knowledge of the incredulous viscosity that is bureaucratic red carpet and Indian tradition.

To further get an idea of how unbelievable this man and his mission are, you could check out Menstrual Man, a documentary by Amit Virmani, or Muruganantham's own Tedx talk. Just don't think Padman will do it for you, though.

We don't know what about biopics summons the mediocrity in our directors like little else does. It's like these fascinating lives - lives such as those of Dasarath Manjhi, the dalit man who literally dug through a mountain to make a road to the nearest hospital, and Mary Kom, the North-Eastern woman who had kids and then won an Olympic medal in boxing, or the more famous Milkha Singh, the Flying Sikh - decided to stop being fascinating for a change and try their hand at being boring instead.

R Balki's film joins this list of movies that do disservice to their subjects. Firstly, it's rather dull writing. There is rarely a moment in the film where you sit up and take notice of the absolute audacity of its lead. It's treated like a given. Something so normal that we needn't be amazed by it. And it's directed likewise. A story so neutral could as well be narrated by the news reader of All India Radio and you wouldn't miss much.

We feel the problem lies in the makers being overwhelmed by their material and thinking it's enough to piggyback on it. They perhaps think it's just enough to narrate and have no reason to create. Unless they create "commercially viable" elements like Sonam Kapoor's character who is also given a romantic angle with lead. What does this fictionalisation serve? How is Sonam Kapoor going to help you when you can't even write a gripping climax with the kind of golden material that's fallen in your hands?

There's that scene where Radhika Apte, playing Akshay Kumar's wife, agonizes over his wasting Rs 55 on sanitary pads because that'll mean letting go of ghee, curds and even milk for the entire household. And soon there's this other scene where this same lady has bright red lipstick on when she goes to the village fair. Exactly what is lipstick doing in this household that has to fret about the expenditure of fifty five rupees?

And that's how you get a great-looking, ho-hum and improbable-sounding film.

But Akshay Kumar grins, weeps and speaks with a feeling that doesn't look like it belongs in this film. There's this one moment where he manages to finally obtain confirmation that he has indeed managed to make a functional sanitary pad, and he's nothing short of lovable there. It is precisely this lovableness that made us breeze through Padman, and will likely ensure that you do, too.
Share. Save. Connect.
Tweet
PAD MAN SNAPSHOT 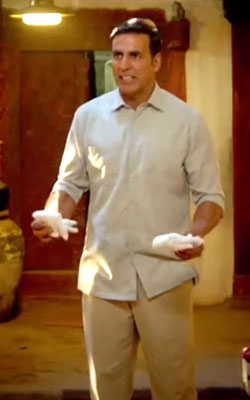 See Pad Man full details
PAD MAN USER REVIEWS
1 - 3 OF 3 COMMENTS
POSITIVE  |  NEGATIVE |  NEWEST  |  OLDEST  |  MOST HELPFUL  |  LEAST HELPFUL
Harshita on 11th Feb 2018, 8:04am | Permalink
The movie is successful in conveying the taboos and issues people make out of period. It
Prashast Singh on 10th Feb 2018, 12:50pm | Permalink
Nothing to say about the above review, but it's time we understand that if a film shows dual behaviour, it's not a writing flaw but instead something intentional. If she had problem with having the money spent on pad and on the other hand had brought lipstick, it shows the main problem was with the pad and not with the money actually. Money was just an excuse because "pad" was considered a taboo by all in the village except the hero, of course.

By the way, the film is excellent in my opinion. Every biopic uses some fiction and nothing is 100% perfect. So if the film has some fiction, what is the problem? If fiction is concerned, then the biggest fiction is the film's setting in North India.

ADVERTISEMENT
This page was tagged for
Pad Man hindi movie
Pad Man reviews
release date
Akshay Kumar, Sonam Kapoor
theatres list
Follow @fullhyderabad
Follow fullhyd.com on
About Hyderabad
The Hyderabad Community
Improve fullhyd.com
More
Our Other Local Guides
Our other sites
© Copyright 1999-2009 LRR Technologies (Hyderabad), Pvt Ltd. All rights reserved. fullhyd, fullhyderabad, Welcome To The Neighbourhood are trademarks of LRR Technologies (Hyderabad) Pvt Ltd. The textual, graphic, audio and audiovisual material in this site is protected by copyright law. You may not copy, distribute, or use this material except as necessary for your personal, non-commercial use. Any trademarks are the properties of their respective owners. More on Hyderabad, India. Jobs in Hyderabad.