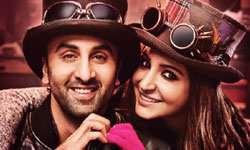 Josh / fullhyd.com
EDITOR RATING
7.0
Performances
Script
Music/Soundtrack
Visuals
8.0
7.0
8.0
8.0
Suggestions
Can watch again
No
Good for kids
No
Good for dates
Yes
Wait to rent it
Yes
See, here's the question: How do you sell a movie with first world problems?

In our humble opinion, this is the strategy.

Step 1: Dazzle your audience with the charms of the first world.

Step 2: Sprinkle in the problems into this charming place but never let your audience doubt that everything is beautiful and splendid. The pill is unimportant; the sugar coating, though, is vital.

If you're lucky and you play your cards right, you'll have a blockbuster. You want proof of concept? We give you Zindagi Na Milegi Dobara.

It would initially appear that films like Tamasha and Ae Dil Hai Mushkil fall in this mould, too. They, too, set up their protagonists in exotic locales of Europe with condos and bachelor pads that look nothing like the 3BHK apartments we bleed monthly for. (No joke there. Period.) They travel in bikes with the engines of cars, or in cars which could touch the speeds of jets, or even in private jets where you finally understand how people could join the mile-high club (hint: there is actual room - not just leg room). These vehicular experiences, we're willing to bet, are nothing like our familiar attempts to sell the 6-year-old scooty on OLX and purchase a KTM on Quikr.

Clearly, these films aren't trying to get us to relate to the characters. They're merely executing Step 1 of the aforementioned strategy. We're meant to be dazzled by all this "fun". There are breathtaking visuals and foot-tapping music. However, if you watched Tamasha, you're perhaps aware that the entire Corsica stretch fails at Step 1. Some would even yawn while Kapoor and Padukone went "Tung'a Tung'a Tung'a Tung! Tang!". This is the exact problem with the first hour of Ae Dil Hai Mushkil as well.

What we were supposed to glean from that one hour is that Ayan (Ranbir Kapoor) is a man-child who in the lap of luxury has never truly known pain. Whereas Alizeh (Anushka Sharma) has seen betrayal in the form of a sour love she can't seem to get over. All of this while they're ostensibly having a lot of fun - a few inane stabs at humour (a sorry track involving Lisa Haydon), some travelling from London to Paris with more pub and disco scenes than we could care for, some deep stuff about heartbreaks and soulful singing, and copious amounts of Bollywood referencing. Most of this doesn't work.

The elaborate attempts at scripting "fun" end up making it look more like "effort". All of Anil Mehta's frames and Pritam's catchy numbers don't liven up things. You're almost thanking your stars when, finally, at the end of the hour conflict makes an appearance in the form of Ali (Fawad Khan). It's now time for Step 2. It's time to sell those first world problems.

And this is where films like ADHM and Tamasha begin to carve an identity of their own. They don't try to "sell" first world problems - they already believe in the validity and the emotions of these stories. It's like they have consciously decided that they're only meant for those folks who'll relate. In making this choice, they lose a large section of the audience and they don't seem to mind. They seem more interested in telling their stories in all their ansgty and messy glory.

ADHM is about the infamous "Friendzone". Girl and guy get along like a house on fire. Guy likes girl. Girl also likes him. But as a friend. Guy feels rejected and girl doesn't see why. He chases, he abandons. He yells, he begs. He tries purest affection. He tries utter jealousy. She doesn't seem to understand. She still loves him. Just not in the way he wants it. He thinks life is unfair. He acts like he's falling apart. Until that moment where he leaves, or thinks "maybe, just maybe, friendship isn't that bad a thing".

These portions of the script are marvelous. If for no reason else, simply for taking this perspective and unapologetically detailing it. Sharma and Kapoor, after the one hour of rather forced paraphernalia of enjoyment, finally start delivering our money's and time's worth. Ranbir Kapoor forgets (and makes us forget) about his Don Juan status. He becomes a goof, and an adorable one at that. He makes it very easy to see why Alizeh loves Ayan but isn't in love with him. Anushka Sharma, too, conveys that complicated emotion in a singularly simple and expressive fashion.

The music in these portions is particularly amazing. Bulleya is chartbusting material while Channa Mereya is stirring.

Aishwarya Rai Bachchan is there somewhere, scorching the screen on the job. After a career brimming with lousy performances, she's only recently been convincing as an actress. Her turn as the "Shayra" Saba Khan in ADHM makes us wonder if she isn't one for multi-tasking. With all the Urdu in her lines, it appears like she forgot about expression in order to tackle the enunciation.

What inspired anyone to cast her as a poetess (in Urdu, no less!), we can't venture to guess. Maybe the argument was, "Look at how stunning she is! Don't you think she can be as great at verse?" This argument is up there along with using a Rampuri chaku for a heart surgery because of how sharp it is. It could still work in the hands of an expert cardiologist, but why take the risk?

And Karan Johar is no heart surgeon. He isn't the most talented story-teller. But his story's got heart. And he's sincere about telling it. He reminds you of that friend who'd dabble in poetry and would recite some in a get-together. You wouldn't perhaps remember much of it the next day, but if you indulge him he could stop the evening from getting dull. Only difference is, Johar has enough money to get his poems published.
Share. Save. Connect.
Tweet
AE DIL HAI MUSHKIL SNAPSHOT 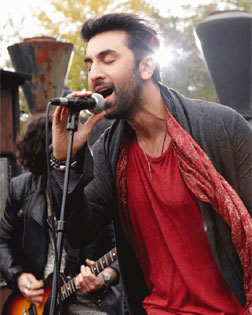 See Ae Dil Hai Mushkil full details
AE DIL HAI MUSHKIL USER REVIEWS
1 - 2 OF 2 COMMENTS
POSITIVE  |  NEGATIVE |  NEWEST  |  OLDEST  |  MOST HELPFUL  |  LEAST HELPFUL
The Common Movie Goer on 29th Oct 2016, 1:30pm | Permalink
Josh, is this movie anything close to Tamasha! Tamasha is, hands down, one of the worst/most depressing movies I've seen in my life. Don't want to subject myself to another couple of hours worth of torture. Just to be clear, I am a common movie goer, not the kind of guy who likes watching sappy Ranbir Kapoor movies.

On a side note, I saw three movies back to back at the movies today. Jack Reacher 2 sucked, and this is coming from Tom Cruise's biggest fan and from someone who loved Jack Reacher 1 to bits. It felt like a B-movie and not at all like a star vehicle. The score was definitely worse than a TV series' score. The cinematography plain sucked, and the fights were uninspired. I am pretty sure it was meant to be a joke, no way Edward Zwick could have directed this after directing The Last Samurai.

Keeping up with the Joneses was funny and has good action in the 2nd half, worth the money and above average. Just watch with low expectations.

The Accountant was richly shot, had great weapons and ammo, good fight choreography as well. The last 10 minutes could have been done away with - the post climax scenes were a drag.
Josh on 30th Oct 2016, 8:14am | Permalink
Hey, Common Movie Goer - I was considering writing a piece comparing Tamasha and Ae Dil Hai Mushkil. I think I'll do it sometime today. Anyway, to answer your question in short - ADHM is more fun and less drama than Tamasha. You may still not like it but I presume you won't hate it as much.

I've cut down on movies after Kabali released. I have a personal pilgrimage level equation towards the film because I feel it showcases the best Rajinikant since Chandramukhi. So I watched it a good seven times altogether.

And yesterday was the hundredth day. So I drove to Chennai and caught it in all the madness. Very satisfying stuff. It was even better than than FDFS.
Kanye on 31st Oct 2016, 1:01am | Permalink
Where will you post the comparison?
Josh on 2nd Nov 2016, 8:14am | Permalink
Be warned, it's rather personal writing. You might find it quite different from my reviews or conversations.

ADVERTISEMENT
This page was tagged for
Ae Dil Hai Mushkil hindi movie
Ae Dil Hai Mushkil reviews
release date
Ranbir Kapoor, Anushka Sharma
theatres list
Follow @fullhyderabad
Follow fullhyd.com on
About Hyderabad
The Hyderabad Community
Improve fullhyd.com
More
Our Other Local Guides
Our other sites
© Copyright 1999-2009 LRR Technologies (Hyderabad), Pvt Ltd. All rights reserved. fullhyd, fullhyderabad, Welcome To The Neighbourhood are trademarks of LRR Technologies (Hyderabad) Pvt Ltd. The textual, graphic, audio and audiovisual material in this site is protected by copyright law. You may not copy, distribute, or use this material except as necessary for your personal, non-commercial use. Any trademarks are the properties of their respective owners. More on Hyderabad, India. Jobs in Hyderabad.