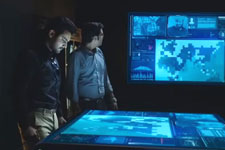 Neema Pramod / fullhyd.com
EDITOR RATING
4.0
Performances
Script
Music/Soundtrack
Visuals
5.0
2.0
4.5
5.0
Suggestions
Can watch again
No
Good for kids
No
Good for dates
No
Wait for OTT
Yes
Chest-thumping nationalism has proven popular of late in Bollywood, with films like Uri and Mission Mangal setting the box office on fire. The flavour seems to have rubbed off on writer-director Sai Kiran Adivi as well, for he has imported a carton of it and dumped the whole thing into his new film, Operation Gold Fish. Only, just one ingredient is not enough to cook an entire dish. Apart from the unbearably strong taste of jingoism, this stale goldfish has nothing to satiate your taste buds.

The story is as old as the Himalayas. Kashmiri Pandits are being tortured and killed by terrorists, led by Ghazi Baba (Abburi Ravi). The viewers get the first glimpse of his cruelty when he brutally murders a journalist (RJ Hemanth) and his wife after he catches the former recording a video of one of his terror-group meetings. Years later, Ghazi is captured by a team of NSG officers, led by Arjun Pandit (Aadi Sai Kumar). (Un)surprisingly, it turns out that Arjun harbours a personal vendetta against Ghazi as well, but the orders of his superiors prevent him from pulling the trigger.

This, however, proves to be a wrong move, for in order to get Ghazi out, his vengeful successor Farooq (Manoj Nandam) plans to kidnap the daughter of the External Affairs Minister of the country (Rao Ramesh). Since the minister does not want his daughter's freedom to be restricted due to his political career, Arjun and his team are employed to keep a watch on the girl from afar.

From this point on there is a jarring tonal shift in the film as it proceeds to tell the tale of four young and carefree college students - Karthik (Karthik Raju), Solomon (Paravateesam), Tanya (Sasha Chetri) and Nithya (Nithya Naresh). The four decide to go on a road trip on a whim, a decision which costs them dearly and intertwines their lives with those of Farooq and Arjun in a way they never foresaw.

There is one twist in the second half of the film which you may not see coming. Unfortunately, that is the only the time the film takes you by surprise. Everything else is predictable, with not a moment of tension woven into the script. Characters get threatened, beaten up, shot at and killed, and you don't feel a smidgen of emotion.

The makers try to infuse the movie with a bit of light-heartedness and comedy, but the jokes are so bland that the only sound they manage to elicit from you are exasperated sighs in moments like the one where Solomon reads the word "Bru" as "bra". Or when Krishnudu's character uses a magnifying glass to recognise people (has no one ever told him about the wonderful invention called spectacles?). Also, for reasons only the makers know, Krishnudu's character is always accompanied by an animated lightbulb hovering around his head. I, for one, appreciated that touch, for the lightbulb seemed to be the only item in the movie to know how to give more than one expression.

Refreshingly, our hero doesn't have a love interest for once, but there is a love triangle among the college students. But even that fails to leave a mark. It is obvious who will end up with whom, and even the makers' last-ditch effort to create a comedy of errors of sorts with the four characters falls flat on its face. There is even an attempt to infuse drama in the form of an estranged father-daughter relationship and Arjun's past, but they don't linger long enough to create an impact.

One flavour does register though - the aforementioned jingoism. The Indian flag makes a mandatory guest appearance, and so do the terms Hindustani, jihad and the like. There is a lot of Islamophobia on display, which the film tries to hide by having one Muslim character named Ismail help Arjun, but it is such a blink-and-miss moment that it barely registers. The movie goes so overboard in trying to establish the cruelty of the terrorists that it ends up looking funny. If you still have any doubts about the film's political leanings, a comment about a minister belonging to a particular political party lays them all to rest.

The performances don't help much. Though Aadi appears restrained and focused throughout, Abburi Ravi hams it up to the maximum. Out of all the actors playing the college students, only Nithya Naresh stands out. Rao Ramesh is wonderful as always, and Anish Kuruvila does his part well. The rest of the cast are just about passable.

Jaipal Reddy's camerawork is decent enough, but the same cannot be said for the other technical aspects. The shift of tone from a serious thriller to a youthful entertainer is abrupt and constantly pulls you away from the film. Some scenes end before they even begin, some others go on for an eternity, and many others could have been chopped off. The songs act as speed-breakers, with not a single memorable tune.

Operation Gold Fish is not a dish that is savoured, but endured if you have a tolerance level for over-the-top nationalism garnished with lame jokes, yawn-inducing love and friendship stories, hints of melodrama, and dollops of Islamophobia and party propaganda. Else, you are better off watching fish getting fried on a pan - at least the end result will give you something to chew on.
Share. Save. Connect.
Tweet
OPERATION GOLD FISH SNAPSHOT 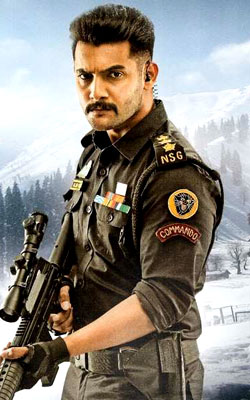 ADVERTISEMENT
This page was tagged for
Operation goldfish rdx hindi dubbed movie
Operation Gold Fish telugu movie
Operation Gold Fish reviews
release date
Aadi Sai Kumar, Sasha Chetri
Follow @fullhyderabad
Follow fullhyd.com on
About Hyderabad
The Hyderabad Community
Improve fullhyd.com
More
Our Other Local Guides
Our other sites
© Copyright 1999-2009 LRR Technologies (Hyderabad), Pvt Ltd. All rights reserved. fullhyd, fullhyderabad, Welcome To The Neighbourhood are trademarks of LRR Technologies (Hyderabad) Pvt Ltd. The textual, graphic, audio and audiovisual material in this site is protected by copyright law. You may not copy, distribute, or use this material except as necessary for your personal, non-commercial use. Any trademarks are the properties of their respective owners. More on Hyderabad, India. Jobs in Hyderabad.