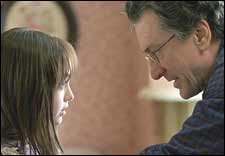 Priyanka Pulla / fullhyd.com
EDITOR RATING
5.0
Performances
Script
Music/Soundtrack
Visuals
NA
NA
NA
NA
Suggestions
Can watch again
NA
Good for kids
NA
Good for dates
NA
Wait for OTT
NA
If the utter predictability of every scene in Hide And Seek is signifying the end of the horror-movie genre in its current state, we die-hard fans better hope that the next big thing is ready and waiting to be shipped soon.

With the Robert De Niro and Dakota Fanning stamp printed conspicuously across it, most of us expected a classic. We ignored the ominous foreboding that the posters with the little girl, bathtub and candles, and the bloody scrawlings on a wall, aroused in us - that this movie would be another ridiculous ersatz of some of the classics: Psycho, The Ring, The Sixth Sense, The Stepford Wives.

If you've seen those, you are reduced to the pitiable state of guessing, correctly, every single cliché (that officially attains the status of a cliché only after Hide And Seek) that is going to be thrown at you. A genre like this is probably as collectively vulnerable to criticism as an Army Battalion. One troop makes a mistake, the whole lot gets punished. One movie milks a cliché one-too-many times, it's killed for everyone. In the end, you are almost feeling embarrassed to be in the theater, that curious feeling you have when you are watching someone ELSE making a fool of himself.

So Robert De Niro is David Calloway, who has a pretty daughter Emily (Dakota Fanning), and the number of times his acquaintances tell him she is a beautiful girl seems almost perverse. Early enough in the movie, her mother Allison (Amy Irving), David's wife, kills herself. Dead in a bathtub full of bloody water, she is discovered by David, with Emily watching from behind.

They move to a remote house in the woods and then the creepy stuff begins. Emily finds herself an imaginary friend Charlie, who holds David responsible for her mother's death. They have bizarre neighbours, recently bereaved from their Emily-aged daughter's death, and the father in the family is almost stalking Emily. The local sheriff (Dylan Baker) constantly appraises them with screwed up eyes and a questioning, lopsided mouth which joins him in the ranks of screwy psychos who could break loose anytime and propel the movie forward. Together they all clump like alternate engines to the movie, waiting to kick-off whenever the director presses the button.

Soon enough, Charlie starts killing people and disfiguring dolls. First a family pet goes, and the next in line is Elizabeth (Shue), who is hitting on David too soon, too obviously. Emily is saying Charlie did it, and David is confused and scared.

De Niro is wonderful as the disimpassioned psychologist-dad to Emily, taking all her pottiness into his stride. Fanning, in her second neurotic role after War Of The Worlds, comes across as a jaded adult in the body of, of course, a beautiful child. They look like brilliant actors in an acting class, playing out a standard, cliched drama for the benefit of the students.

The identity of Charlie is revealed soon enough. The denouement is at once both Agatha Christie and M Shyamalan in stategy and technique. Heck, it's a whole lot of people, these are just top-of-the-mind. However, this last quarter of the movie has so many logical loopholes that none of the story thus far fits in, in retrospect. The moment of revelation, instead of being as grand and intense as Moses appearing with the Ten Commandments, is like a garbled dream. The audience are left flicking their heads from side to side, saying, "What? What? What was that? What happened?" It's almost like something came and hit your car while you were sleeping in the back-seat. You have to go back home and talk to someone who got it when it happened.

After Hide And Seek, most of us will be careful choosing our horror movies. Hope De Niro and Fanning do the same with theirs. As for recommendations, we advise only the novices to go catch this one. Only those who are starting life with Hide And Seek. Others, strictly stay away unless you have an obsession, or like Skyline's canteen. You definitely won't feel inspired from this one.
Share. Save. Connect.
Tweet
HIDE AND SEEK SNAPSHOT

See Hide And Seek full details
HIDE AND SEEK USER REVIEWS
1 - 3 OF 3 COMMENTS
POSITIVE  |  NEGATIVE |  NEWEST  |  OLDEST  |  MOST HELPFUL  |  LEAST HELPFUL
USER RATING
3.0
4 USERS
Performances
Script
Music/Soundtrack
Visuals
NA
NA
NA
NA
Can watch again - NA
Good for kids - NA
Good for dates - NA
Wait for OTT - NA
Seshu Babu on 15th Oct 2005, 7:08pm | Permalink
Agree again with the reviewer's observations. Of late, De Niro has been short-selling himself ('Analyze that', 'Fockers', 'City by the sea' anyone?). Where's the De Niro of 'Heat' and 'Goodfellas'? Hell, even the 'Capone' character from 'Untouchables' had more depth and feeling than most of his recently played characters. And what's with Hyderabad getting leftover releases - I watched this one at Chennai at least 4 months back.
RATING
2
Degenerate Mutant on 15th Oct 2005, 4:02pm | Permalink
Did not watch the film, but the review is good. Particularly liked this line:

"One movie milks a clich

ADVERTISEMENT
This page was tagged for
Hide And Seek english movie
Hide And Seek reviews
release date
Dakota Fanning, Robert De Niro
theatres list
Follow @fullhyderabad
Follow fullhyd.com on
About Hyderabad
The Hyderabad Community
Improve fullhyd.com
More
Our Other Local Guides
Our other sites
© Copyright 1999-2009 LRR Technologies (Hyderabad), Pvt Ltd. All rights reserved. fullhyd, fullhyderabad, Welcome To The Neighbourhood are trademarks of LRR Technologies (Hyderabad) Pvt Ltd. The textual, graphic, audio and audiovisual material in this site is protected by copyright law. You may not copy, distribute, or use this material except as necessary for your personal, non-commercial use. Any trademarks are the properties of their respective owners. More on Hyderabad, India. Jobs in Hyderabad.