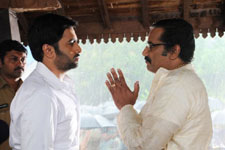 Kritika Deval / fullhyd.com
EDITOR RATING
5.0
Performances
Script
Music/Soundtrack
Visuals
7.0
4.0
8.0
7.0
Suggestions
Can watch again
No
Good for kids
No
Good for dates
No
Wait for OTT
Yes
The premise of Rowdy Fellow, on its own, is pretty simple. Rana Pratap (Nara Rohit) is, as the title proclaims, a rowdy fellow with too much money and too few scruples. When an SP rubs him the wrong way, his evil genius prompts him to decide that the only way to get his own back is by getting into the police department himself. The plot revolves around the sad state of affairs in which he finds the people of the small town to which he is appointed as SI, and how his humanity is awakened by the plight of the villagers at the hands of an aspiring politician (Rao Ramesh) and his goons.

First-time filmmaker Krishna Chaitanya might not have chosen a particularly original story for his debut venture, but if the idea was to show viewers just how good his chops are, then Rowdy Fellow serves admirably. The film has all of the things that seem to be essential to commercial success in Tollywood - heroism, "punch" lines, fights, the requisite sentiment and comedy, and a token romance. However, Chaitanya elevates all these elements with his decidedly original and equally engaging, if not entirely consistent, voice.

The major arc of narrative revolves around the growth of the hero. Rana settles himself in the post of SI at Eluru, and the first thing he does is to shell out money on getting the station rigged up in style, equipping it with LCD TVs and gaming consoles to while away his time with. When he is called on to exert himself, he does so with the aid of a secretary who only exists to serve him.

Pretty soon, he finds himself embroiled in the sordid case of several missing persons and nefarious land grabbings, at the center of which is the sordid and malevolent Durga Prasad (Rao Ramesh), a goon with political ambitions who has the people of nearby Kolleru under his violently oppressive thumb. Also, there is the daughter Megha (Vishakha Singh) of the aforementioned SP (Ahuti Prasad) to be wooed.

This plot is supported by good dialogues, well-written characters, and some truly impressive camera work, and could've been a great watch if only the screenplay had not been so uneven. Sure, a labor of love can be difficult to edit, but if only the makers had been a tad more generous with the scissors, Rowdy Fellow could've escaped the ill-deserved fate of being the tedious watch that it turns out to be.

The off-pacing and the film's tendency to get preachy culminate in turning the whole thing into a rather mediocre affair. Also, the makers' tendency to curry favor with "commercial" markets at the oddest moments does the movie itself no favors.

Rana's evolution is quite believable for the most part, except when he gets into unavoidable heroics. Nara Rohit lends admirable depth to the character, and makes the most of his rather well-written lines. He has all the makings of a good actor, and one can only hope that he will venture to projects other than the political potboilers he's restricted himself to so far.

Vishakha Singh gets on your nerves a bit, but has been directed well enough to be tolerably entertaining. Rao Ramesh delivers just the right amount of understated menace, and is a worthy villain. Posani and his company of comedians are quite amusing, and are helped by neatly sketched characters and lines that make full use of the coastal slang of Andhra.

The cinematography lends a lot of mood to otherwise mediocre scenes, and the camera treats the rural charms of the setting well. It is, however, Sunny M R's background track that gets the credit for lending the film an emotional depth you wouldn't expect in a project of this sort. A newbie he might be, but the director seems to be well aware of the impact of a movie in which all of the elements are in synergy.

As an entertainer, Rowdy Fellow falls disappointingly short of the mark, but as a herald of things to come, it cannot help but engender anticipation among its audiences.
Share. Save. Connect.
Tweet
ROWDY FELLOW SNAPSHOT 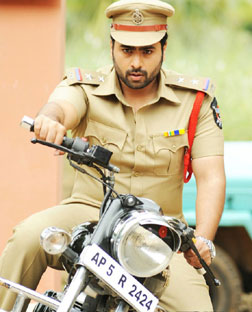 ADVERTISEMENT
This page was tagged for
Rowdy Fellow telugu movie
Rowdy Fellow reviews
release date
Nara Rohit, Vishakha Singh
theatres list
Follow @fullhyderabad
Follow fullhyd.com on
About Hyderabad
The Hyderabad Community
Improve fullhyd.com
More
Our Other Local Guides
Our other sites
© Copyright 1999-2009 LRR Technologies (Hyderabad), Pvt Ltd. All rights reserved. fullhyd, fullhyderabad, Welcome To The Neighbourhood are trademarks of LRR Technologies (Hyderabad) Pvt Ltd. The textual, graphic, audio and audiovisual material in this site is protected by copyright law. You may not copy, distribute, or use this material except as necessary for your personal, non-commercial use. Any trademarks are the properties of their respective owners. More on Hyderabad, India. Jobs in Hyderabad.