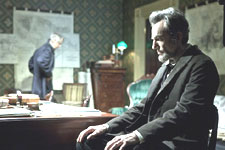 Kritika Deval / fullhyd.com
EDITOR RATING
8.0
Performances
Script
Music/Soundtrack
Visuals
9.0
9.0
8.0
8.0
Suggestions
Can watch again
Yes
Good for kids
No
Good for dates
Yes
Wait for OTT
No
The movie begins with a war scene. It is muddy, it is bloody, and it is utter chaos. On the sidelines of this ocean of ataxia sits the President of the United States of America, Abraham Lincoln (Daniel Day-Lewis), the man who pushed his nation into what will probably always be one of the most tumultuous times in its history. Here, he is President Abe. Lovable, loved, droll, eminently approachable.

Then, the scene shifts. He is in his bedroom with his wife, the supposedly insane Mary Todd Lincoln (Sally Field). And now, he is just a man - a husband with a job, discussing his troubling dreams, and the much more troubling question of the contentious 13th Amendment to the Constitution, outlawing slavery and involuntary servitude except as punishment for a crime.

It is this perhaps most momentous achievement of America's 16th President that this film concerns itself with. By itself, this story of getting the bill passed (thus putting a precipitous end to the increasingly bloody Civil War), of political intrigue, of the circus that is the House, is vastly entertaining.

Said intrigue in the masterful hands of Daniel Day-Lewis, Tommy Lee Jones, Sally Field and Co., by no means takes on mythic proportions, but wields a more insidious magic. The magic of watching with an astonishing intimacy the unfolding of history.

All these personae, rooted as they are in a time that best reflects them, Day-Lewis wears and shrugs off as though they were particularly lightweight capes.

The year is 1865. The Civil War could end any moment, rendering the war-backed Emancipation Proclamation futile. And the man who declared all the people of the United States "then, thenceforward, and forever free" is torn between ending the war, thus saving thousands of lives, and keeping his promise.

Hence, the bill for the 13th Amendment must be passed before the war ends. It is a race against time, a race against race (ha!), and a race against recalcitrant Congressmen. Not only must he ensure that all Republicans vote for the amendment, but also that at least 20 of the Democrats do the same.

By hook, but mostly by crook, the President achieves his end (anyone who thinks that's a spoiler needs to brush up on their history).

Meantime, he has rebellious sons to deal with, ruffled emotions to soothe, illegally occupied toll booths to restore, and life as usual to live.

And, then, there is Mary Todd Lincoln, whom Sally Field brings to such delightfully chameleonic life in a sharp departure from the usually unhinged and querulous portrayals of this particular First Lady. This Mary can do emotional break-down just as well as she can sweetly and scathingly upbraid a Radical Repulican at a party (or a "shindy", as they call it here. Say it out loud. It's fun. Especially in the Southern drawl they speak). She is clever, forceful, and loyal as they come.

In real life, this First Lady was hounded by rumours of insanity. After the death of her husband, she was institutionalised for four months by her only living son. Later, she went on to live and die in seclusion. Watching the movie's dynamic and spirited portrayal of her makes this series of events rather hard to swallow.

"All anyone'll remember of me's that I was crazy and I ruined your happiness," says this rather plain-looking Steel Magnolia towards the end of the film, with a strange mixture of wryness and sadness. This has most certainly been true, up until more recently.

Mary Todd Lincoln is also pretty much the only assertive woman you'll see in the movie. The rest of the film is a study in the superiority complex of the average white male of the time. "I abhor slavery, but I am against the Amendment," nervously begins one politician, going on to add, "we will have to give them the vote. What next? Universal enfranchisement? Vote for women (Gasp!)?" which strident observation trails off into deafening boos from the rest of the House.

What a long way we have come since then, hmmm? Not that your average male politician today wouldn't like to go back to just such a time, but hey, baby steps and all that.

Lincoln is an amalgam of all the things that make good cinema. Brilliant performances, a wonderful story, an attention to detail, and a surprising abstention from Spielberg's usual penchant for grand drama.

This pondering, conversation-ridden rendition of one of humanity's most momentous decisions is worth every single one of its Oscar nominations.

It could also have made for a wonderful lesson in history to your children, but all the Parliamentary profanity gets in the way.
Share. Save. Connect.
Tweet
LINCOLN SNAPSHOT 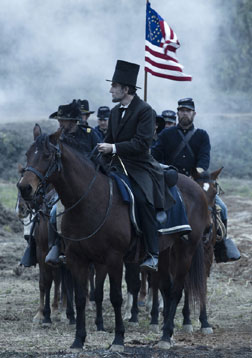 ADVERTISEMENT
This page was tagged for
Lincoln english movie
Lincoln reviews
release date
Daniel Day-Lewis, Sally Field
theatres list
Follow @fullhyderabad
Follow fullhyd.com on
About Hyderabad
The Hyderabad Community
Improve fullhyd.com
More
Our Other Local Guides
Our other sites
© Copyright 1999-2009 LRR Technologies (Hyderabad), Pvt Ltd. All rights reserved. fullhyd, fullhyderabad, Welcome To The Neighbourhood are trademarks of LRR Technologies (Hyderabad) Pvt Ltd. The textual, graphic, audio and audiovisual material in this site is protected by copyright law. You may not copy, distribute, or use this material except as necessary for your personal, non-commercial use. Any trademarks are the properties of their respective owners. More on Hyderabad, India. Jobs in Hyderabad.