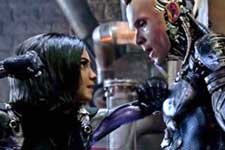 Punarvasu Pendse / fullhyd.com
EDITOR RATING
7.0
Performances
Script
Music/Soundtrack
Visuals
7.0
6.0
7.0
9.0
Suggestions
Can watch again
Yes
Good for kids
Yes
Good for dates
Yes
Wait to rent it
No
Alita: Battle Angel is a visual treat. Now that this fact is out of the way, let us get into more relevant stuff.

The movie is based on the manga Battle Angel Alita (1990) by Yukito Kishiro, which was brought to the notice of James Cameron by another director Guillermo del Toro in 1999. Cameron wanted to adapt the post-apocalyptic dystopian story into a movie for a long time, but felt that the CGI technology that was needed to do justice to it didn't exist back then. Almost two decades later, Cameron finally works on the project.

Sure, he's not the director - it is Robert Rodriguez that is tasked with bringing Cameron's vision to life, and handles with aplomb a project that is more ambitious than anything he has ever worked with before - but Cameron is very much present, and Alita: Battle Angel has his inimitable touch. The visual grandeur offered by the movie might not be nearly as trailblazing as that of Avatar, but it sure comes close. And on the flip side, the script is written by Cameron with Laeta Kalogridis, and so has the familiar pitfalls of previous Cameron movies, unspectacular dialogue being one.

Dr Dyson Ido (Christoph Waltz) finds the surviving core of a cyborg human in a salvage yard, and fixes her up with parts intended for his dead daughter, to bring to life the titular Alita (Rosa Salazar). The light-hearted curiosity exhibited by the wide-eyed girl (despite those big, anime eyes grabbing attention in the promotional material, you'll have forgotten that there is something different about them within minutes) is a welcome contrast to the rather edgy portrayal of amnesiac superheroes in most movie-verses. Alita has this joie de vivre that shines in the unlikeliest of places, like an ambush where she has to fight for her life as well as that of Dr. Ido.

Intense combat also triggers flashbacks of her past life, prompting her to take up the role of a "hunter warrior", a kind of bounty hunter that works as some sort of law enforcement in the otherwise dystopian Iron City. Alita also shines at the fantastic urban sport of Motorball, which features some of the slickest action scenes in the movie. Motorball is a free-for-all roller derby, except with weapons and over-the-top cybernetic upgrades. It also happens to be the only way a ground dweller can hope to ascend to the sky city of Zalem.

The script manages to get a lot of detail from the manga. The story does appear a bit surreal at times, but for the most part the degree of suspension of disbelief required is probably not as much as that for your average superhero flick. For example, the complete lack of firearms works surprisingly well for the movie (guns are banned in Iron City) - the combat is gritty, fluid and in-your-face. Another fun plot device is the code the hunter warriors go by - it is complicated and interesting, and lets Alita deal with one incident in particular in a very different fashion than expected.

Rodriguez also manages to give a few of his own touches to the script despite claiming that he only directed Cameron's vision. We see "cantinas" in Iron City, and an overall hispanic feel to it (the manga was set in Kansas, but Rodriguez shifted it to South America). Zapan has an ancient Mexican carving on his back. Even Dr. Ido's clinic is called "Clinica" on the signboard, bringing a touch of diversity to the script.

The above-average runtime of the film still feels a bit short for the amount of stuff the movie packs into it. However, that also means that multiple times transitions between scenes appear a bit sudden - like chapters from a comic. Examples of this would be Ido initially telling Alita that she need not waste time on the frivolous sport of Motorball, and then suddenly being shown accessorising her for it, without any scenes transitioning to that. Another one is the climactic scene almost feeling forced because the relationship between Alita and Hugo, which seems to move too slowly initially, rushes along a bit too fast by the end of the movie. Also, quite a few characters pop up in random places as if they were only there to further the plot.

Certain scenes linger, though - the bar brawl with the "hunter warriors" and a couple of sequences featuring the rather sleepy-looking Hugo come to mind. Finally, even though it may not be a bad thing, the climactic scene screams "we have a sequel planned".

The CGI is impeccable, especially in 3D - every scene looks like utmost care was taken to present the world in the exact way Rodriguez visualised it. The different textures of the two main areas - the lowly Iron City and the well-nigh-unreachable Zalem - are a fantastic lesson in how to portray contrast in film. The pacing of the movie also works wonders: the viewer is constantly teased about a grand villain who oversees it all from very early on in the movie, and that manages to keep a firm hold throughout, including at the cliffhanger at which the movie frustratingly leaves you.

Rosa Salazar is tasked with a lot of work by the script, with the added weight (quite literally) of those huge eyes. And through an astonishing blend of fantastic acting via motion capture and some digital work, she convincingly carries a movie that demands much from its titular character.

Despite it not being the kind of role you would expect from Christoph Waltz, you cannot really find much fault in his Dr Ido. Mahershala Ali manages to make the most of his clunky lines. Jennifer Connelly's character had a lot of potential for much more development, but she plays her part without fault. Ed Skrein is the biggest source of hilarity in the movie, as a narcissistic bounty hunter, despite his intimidating appearance. Keean Johnson's Hugo honestly feels a bit forced as Alita's love interest, despite his character's overall importance to the plot.

Alita: Battle Angel is, at its heart, a mass entertainer - and it succeeds in that regard pretty convincingly. It manages to hold your attention with confident ease, and the slightly long 142-minute runtime does not feel stretched for the most part. The constant allusion to its bigger antagonist works in its favour (and a lot of people will recognize the uncredited actor who plays him). The movie provides nothing path-breaking in terms of plot, but evokes a feeling of familiarity that couples well with the opulence that you have so come to expect from James Cameron.

Don't wait for this on TV or OTT - it is a sheer visual spectacle and deserves a viewing on the big screen.
Share. Save. Connect.
Tweet
ALITA BATTLE ANGEL (TELUGU) SNAPSHOT 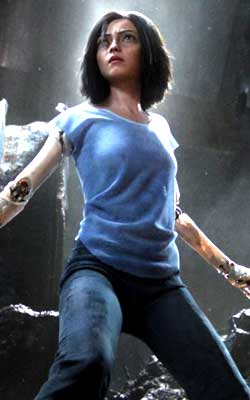