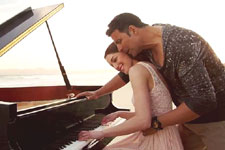 Nupur Barua / fullhyd.com
EDITOR RATING
3.0
Performances
Script
Music/Soundtrack
Visuals
5.0
3.0
5.0
5.0
Suggestions
Can watch again
No
Good for kids
No
Good for dates
No
Wait for OTT
No
Over the past couple of years, remakes have flooded the Hindi film market, but what is striking is that most of them, like Khoobsurat and Chashme Baddoor, are titles of comedies from the first half of the 1980s. The two mentioned above did not do wonders at the box office, so you'd wonder why Abhishek Sharma, director of Tere Bin Laden, chose a not-so-great movie, Shaukeen, to make a contemporary version of.

To begin with, the oddly-named The Shaukeens, is two movies in one, which we'll explain as you read along. The basic plot revolves around three old friends, who think that life has treated them pretty badly when it comes to women. Lali (Anupam Kher) has a good shoe business, but his personal life is going to the dogs. His wife (Rati Agnihotri) has turned spiritual and therefore is not interested in physical pleasures. Spice merchant Pinky (Piyush Mishra) is a widower, and social worker KD (Annu Kapoor) is just plain obnoxious.

All three spend their time together by leering at younger women in parks. However, when they try to chat up someone who they think is a call girl, they are taught a lesson, and they come to the conclusion that Delhi has become an unsafe place for them. They need a holiday to have sex, and because Thailand is so overrated, they decide to head for Mauritius, in the hope of having a good time.

Their choice of residence is a homestay run by Ahana (Lisa Haydon). The three men are immediately attracted to her youth and vivacity, and soon find themselves vying with each other for her attentions. Oblivious to the actions of those she thinks are harmless old uncles, Ahana, a recycling designer, confesses to them that her one true love is the superstar Akshay Kumar (Akshay Kumar), and that she is willing to sleep with the person who gets her introduced to him.

And this is where the second movie comes in. Akshay Kumar is an alcoholic superstar, whose secretary is very efficient in landing all those 200-crore films for him to sign up for. Akshay, however, wants a National Award, and he is frustrated that nobody takes him seriously as an actor. Will he ever meet Ahana, and will the three lecherous men get a chance to fulfil their fantasies?

You find that you do not particularly care where the movie is headed. Men who treat women as sexual objects and very little else are not the ideal protagonists for a movie. The crassness of the plot itself is enough to put you off the film altogether. It may have been funny in the 1980s, but male chauvinism and leering are sensitive topics now. You expect dignity in older men who want to maintain an active sexual life. The premise itself is not funny, so the humour falls flat in the first few minutes of the movie.

The trio are best friends on a mission, but there is no camaraderie between them. The only thing they have in common is to have sex, and you wonder how they are friends at all. Given that the plot is supposed to highlight their relationship, and given that there is not much of a relationship, the film becomes one monotonous scene after another, with sexual innuendos and plenty of women showing bare skin. The male gaze, a popular theme, is gaudy and intolerable in the screenplay.

As for the Akshay Kumar sub-plot - it is a welcome distraction. There is nothing noble about making fun of the National Award, but it is a far better story than the one with three men running after younger women, with their tongues hanging out.

The original film may have worked not only because of the time it was released in, but also because of the fellowship evident in the three actors - Ashok Kumar, Utpal Dutt and A K Hangal. In this present rendition of the movie, the first glaring problem is the lack of chemistry between the main actors.

Anupam Kher has played similar roles many times. He looks bored and almost condescending. Annu Kapoor is very excited throughout the movie, and gets on to your nerves. As for Piyush Mishra - he looks the sleaziest, and is not a very pleasant sight in fewer clothes.

Lisa Haydon is a ditsy young thing in the movie - a far cry from her fun-loving personality in Queen. She is the most likeable character in the film, but the role does not do justice to her talent. Askhay Kumar plays himself with élan, and is the only one who provides a few laughs, but the role is rather short, and disappointing.

The production and costume designs are so clichéd that they are predictable. The songs are diverse, since there are more music directors than there are actors. Some of the music is catchy, but nothing really catches your fancy. The cinematography, like the plot, is dull. And the editor needs to be questioned for letting the movie go on and on.

There is nothing in The Shaukeens that is either relatable or entertaining. If you really want to know about three old men going through a sexual life crisis, watch the original. At least the actors are worth watching.
Share. Save. Connect.
Tweet
THE SHAUKEENS SNAPSHOT 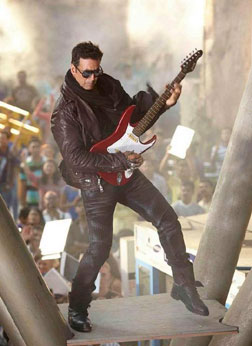 ADVERTISEMENT
This page was tagged for
The Shaukeens hindi movie
The Shaukeens reviews
release date
Akshay Kumar, Lisa Haydon
theatres list
Follow @fullhyderabad
Follow fullhyd.com on
About Hyderabad
The Hyderabad Community
Improve fullhyd.com
More
Our Other Local Guides
Our other sites
© Copyright 1999-2009 LRR Technologies (Hyderabad), Pvt Ltd. All rights reserved. fullhyd, fullhyderabad, Welcome To The Neighbourhood are trademarks of LRR Technologies (Hyderabad) Pvt Ltd. The textual, graphic, audio and audiovisual material in this site is protected by copyright law. You may not copy, distribute, or use this material except as necessary for your personal, non-commercial use. Any trademarks are the properties of their respective owners. More on Hyderabad, India. Jobs in Hyderabad.