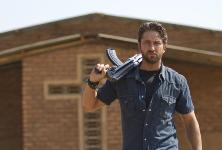 EDITOR RATING
5.0
Performances
Script
Music/Soundtrack
Visuals
5.0
4.0
6.0
6.0
Suggestions
Can watch again
No
Good for kids
No
Good for dates
No
Wait for OTT
Yes
How much does one really know about the Dark Continent, Africa? What we have are impressions from the news, and the movies, mostly - and they always leave a lump in your throat. Africa seems to be a cursed land, and the universal perspective on the region is that it needs help, from the more "evolved" citizens of the developed world. If you have done your bit for Africa, then you have more than made up for all your sins, or so it is believed.

So when an evolved American, Sam Childers (Gerard Butler), leaves behind his days of sex, drugs and rock and roll, and "finds" himself as a born-again Christian, the first place he moves to is Uganda, with all good intentions of making life easier for the deprived.

However, he soon realises that to work there in community development, he has to develop a skin as thick as that on a rhinoceros. During the course of his voluntary atonement program, he reaches Sudan, where young children are kidnapped and either turned into child-soldiers, or raped.

Sam decides to take upon himself the responsibility of rescuing these kids, even if it means getting killed. In the process, he begins to agitate the local goons. What keeps him going is his wife's unquestioning support, his own conviction in his mission, and his violent history.

Based on a book named "Another Man's War" by Sam Childers, the movie is an adaptation of the author's life, and a biopic. The real Sam Childers has rescued and rehabilitated over a thousand children, widows and orphans in his Children's Village in Southern Sudan. He is a well-known persona in the region, and he continues to fight for the cause.

The movie, on the other hand, seems like a rather shallow representation of the man's life. Marc Forster, who has also directed Quantum Of Solace, likes his action, and he fills Machine Gun Preacher with what looks like unnecessary sequences. In short, the movie is more like Rambo than The Constant Gardener. Aficionados of African misery will, therefore, be disappointed with the way the plot unfolds.

Too much emphasis is laid on Childers' need for redemption. The druggie biker is not the ideal husband or father, and definitely not a very nice person, so his sudden need to be "helped" comes across as forced.

While this is a true story, a few liberties have been taken with how low a man can go before he experiences a desire to become a better man. And Childers' wife, Lynn (Michelle Monaghan), is a little too forgiving for somebody who has had to live with her husband's erratic behaviour.

And things just fall into place all the time in the movie. It could not have been that easy for the original Sam Childers to take the drastic step to shift to an unknown region.

In an attempt to portray the earnestness of the protagonist, the director makes him as single-minded as a mercenary. While some of the action sequences are state-of-the-art, not once is the audience allowed into the mind and heart of the man who is determined to bring about a change in the lives of countless victims of terror and horror.

What, for example, goes on in his mind as he reverts to his violent ways to get a point across? Did he not renounce that life earlier? Why does he need to be told over and over again that he is a saviour of sorts? The audience and that character already know that. Does he feel that this is the only way he can make up for all his past mistakes?

Gerard Butler is as passionate as they come, and quite a treat to the eye, too, but he is still the action hero from 300. Regardless of how hard he tries (and this he does), he cannot bring to the screen the depth that the character should have. His American accent is tinged with his original Scottish accent, and he moves from one sequence to another without convincingly showing the transition - both emotional and physical - that Sam Childers went through as he prepared for his project.

The saving grace in this otherwise rather insipid movie is the music. The production design is predictable, which makes the movie duller.

The makers have their hearts in the right place, but there will be comparisons with The Constant Gardener and Rambo. Machine Gun Preacher is worth one watch, despite many loopholes, because all the incidents shown in the movie are more or less based on the events in the life of a remarkable man.
Share. Save. Connect.
Tweet
MACHINE GUN PREACHER SNAPSHOT

ADVERTISEMENT
This page was tagged for
Machine Gun Preacher english movie
Machine Gun Preacher reviews
release date
Gerard Butler, Michelle Monaghan
theatres list
Follow @fullhyderabad
Follow fullhyd.com on
About Hyderabad
The Hyderabad Community
Improve fullhyd.com
More
Our Other Local Guides
Our other sites
© Copyright 1999-2009 LRR Technologies (Hyderabad), Pvt Ltd. All rights reserved. fullhyd, fullhyderabad, Welcome To The Neighbourhood are trademarks of LRR Technologies (Hyderabad) Pvt Ltd. The textual, graphic, audio and audiovisual material in this site is protected by copyright law. You may not copy, distribute, or use this material except as necessary for your personal, non-commercial use. Any trademarks are the properties of their respective owners. More on Hyderabad, India. Jobs in Hyderabad.