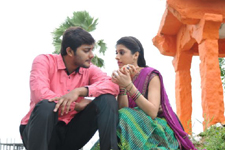 Ravi Kandala / fullhyd.com
EDITOR RATING
1.0
Performances
Script
Music/Soundtrack
Visuals
1.0
1.0
1.0
3.0
Suggestions
Can watch again
No
Good for kids
No
Good for dates
No
Wait to rent it
No
Oh the brilliance! We'll say it again - oh the brilliance! It could take this reviewer his whole life to recover from the kind of brilliance he was subjected to while watching this flick. More likely, the reviewer might not ever recover.

Karthik aka Bunny (Prince) is a soft-spoken software engineer, while Charan aka Cherry (Mahat Raghavendra) is a rough-mannered jobless engineering graduate. The two lead their separate lives without much ado - but fate (or the director) intervenes. The two are involved in an accident, and are rushed to a hospital with head injuries.

The director plays his masterstroke here by introducing Yandamuri Veerendranath (the self-proclaimed psychological guru) as a brain surgeon. This surgeon decides that it is too risky to operate on the two as they have blood clots near the hippocampus (an important part of the brain, one that dictates memory), and calls upon Dr. Saxena (Suman) for advice. Dr. Saxena hits upon a brilliant idea of transplanting neurons between the brains of the two (how that solves the problem of blood clots is beyond us) - oh the brilliance!

At the end of this path-breaking operation, Bunny finds that he is trapped in Cherry's body while Cherry finds himself in Bunny's body. The two decide to have a "reverse" operation so that their neurons are inserted in the right place, but Dr. Saxena is out of the country for three weeks forcing them to lead each other's lives. The comedy of errors that results is supposed to be the second half of the movie.

However, the second half also involves a sub-plot about Bunny's college friend, who dies trying to execute an engineering project involving power generation. Bunny holds himself responsible for the death, and conceives an ingenious project (more brilliance in store).

Bunny's project involves placing piston-styled machines under rubber speed-breakers. Whenever vehicles pass over these speed-breakers, the pistons are activated, and energy is generated. When these are connected to an inverter, the energy can be converted into power - oh the brilliance!

This "project" is approved by "foreign" delegates who exclaim "Indians are intelligents" at the end of the presentation. Once this is done, Dr. Saxena promptly returns, and performs the same (brain transplant) operation yet again, restoring the lives of Bunny and Cherry to each other - oh the brilliance!

There is also space for two love-stories in this brilliant plot. More brilliance is in store when one of the girls tells Bunny (with Cherry's brain) that she loves his mind (!!!), and hence we are supposed to understand that she loves Cherry and not Bunny - oh the brilliance!

The plot is enacted by some brilliant actors including Prince and Mahat Raghavendra. Both Prince and Mahat share roughly 5 expressions between the two. While Mahat at least manages to try some dancing, Prince fails even at this department. There are two female leads who do not even play an ornamental part in the movie. They are around for only the songs. Brahmanandam is there for three scenes, all of which must have been shot in less than a day.

There were a few songs, but the brilliance of the plot left us too numb to notice them. The technical departments do a fair job, to give them credit. It is the director and the scriptwriter who are entirely at fault here.

Bunny N Cherry is one of those films that make you say aloud "Did the cast and crew see the movie at least once before it released? What did they think of it?" You might end up saying this over and over again - enough number of times for people to think of calling Erragadda. Just like this reviewer, who has been repeating the word "brilliance" over and over and over again.
Share. Save. Connect.
Tweet
BUNNY N CHERRY SNAPSHOT 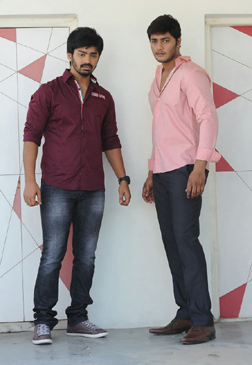 ADVERTISEMENT
This page was tagged for
mp4 video tleugu bunny n cherry 2013
bunny and cherry telugu full movie download
bunny and cherry telugu movie download
bunny and cherry full movie telugu
bunny n cherry
Follow @fullhyderabad
Follow fullhyd.com on
About Hyderabad
The Hyderabad Community
Improve fullhyd.com
More
Our Other Local Guides
Our other sites
© Copyright 1999-2009 LRR Technologies (Hyderabad), Pvt Ltd. All rights reserved. fullhyd, fullhyderabad, Welcome To The Neighbourhood are trademarks of LRR Technologies (Hyderabad) Pvt Ltd. The textual, graphic, audio and audiovisual material in this site is protected by copyright law. You may not copy, distribute, or use this material except as necessary for your personal, non-commercial use. Any trademarks are the properties of their respective owners. More on Hyderabad, India. Jobs in Hyderabad.