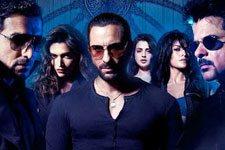 Ravi Kandala / fullhyd.com
EDITOR RATING
4.0
Performances
Script
Music/Soundtrack
Visuals
4.0
3.0
4.0
4.0
Suggestions
Can watch again
No
Good for kids
No
Good for dates
No
Wait to rent it
Yes
Franchises, sequels and prequels are the norm in Hollywood. Nearly every installment of the super-hero franchises makes tonnes of money, and this is what must have attracted Bollywood to the idea of a sequel. If Yash Raj have their Dhoom series, the Bhatts have their Jisms, Jannats, Murders and Raazes, and meanwhile, Ekta Kapoor is making Ragini MMS 2. Abbas-Mustan, the director duo, who are known to copy all their plots from Hollywood, must've felt left out, and therefore, we have Race 2.

Race was watchable, thanks to some good songs, and the novelty of the locales and cars. How we wish we could say the same about Race 2.

Race 2 has six main characters - Ranvir Singh (Saif Ali Khan), Armaan Mallik (John Abraham), RD (Anil Kapoor), Alina (Deepika Padukone), Omisha (Jacqueline Fernandes) and Cherry (Amisha Patel). The story revolves around a heist and a game of one-upmanship between these characters. One can never be sure of the loyalties of any of the characters, and no one can be trusted. This game is then stretched over the next two and half hours.

The one thing constant in Abbas-Mustan's movies is that there are "twists". We are pretty sure that a typical scripting session between the brothers consists of this - writing for around 15 minutes, one of the brothers shouting out "TWIST!" and adding a twist, and then both high-fiving each other and continuing scripting for the next fifteen minutes, then the other brother shouting out "TWIST!", and so on and so forth, until their hands are raw from high-fiving, after which they probably shout out "CLIMAX!" together.

All this is good if any of the twists actually have some shock value, but in Race 2, they are all so predictable that anyone who cannot see them coming deserves to watch the movie, and probably Race 3, too (if the ending was a subtle hint - with all the subtlety of a sledgehammer coming down on an egg).

This time, when they reached the sets of Race 2, they must have also realized that they had not written any lines for Anil Kapoor and Amisha Patel, after which they seem to have asked some hapless teenage assistant to come up with a few dialogues. The assistant then immediately probably Googled "cheesy and sleazy" or something to that effect, and wrote down all the search results and handed the paper over to the actors, as a result of which we have Anil Kapoor actually telling Amisha Patel that he "does not have time to pop her cherry".

Abbas-Mustan have made similar movies for so long that this time, the audiences were not even amusing themselves trying to predict a twist - it seemed inevitable that one comes in every few minutes.

Saif Ali Khan has two hairstyles in the movie, and if you observe carefully, he looks bald in both. Actually, the hairstyles tell us what kind of a scene is going on: hair falling to the sides, trying to cover the runways - romantic scene; hair slickly pushed back letting the bald patches show - serious plotter scene.

John Abraham looks and acts like a piece of beef. Anil Kapoor should stop, seriously, stop. Some of the lines he is given in this movie are extremely cheap, and unless he wants to be remembered by these roles, he should just walk away gracefully.

The women show off a lot of skin, and very little acting skills. Deepika Padukone sure deserves a mention, for showing more skin than the others.

The music is functional, with the costumes of the heroines ensuring that very little attention is paid to the actual music anyway. The songs are all lessons in rhyme, with lines that end with "shoes", "loose" and "booze"; "breeze", "tease" and "seize"; etc.

The movie has a gory fight sequence between John Abraham and another beefcake, and enough double entendre by Anil Kapoor, that warrant an adult rating. It's a wonder how it got away with a U/A rating. Don't take your kids, or better still, don't go at all.
Share. Save. Connect.
Tweet
RACE 2 SNAPSHOT 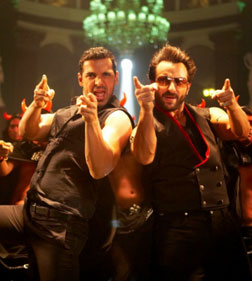 See Race 2 full details
RACE 2 USER REVIEWS
1 - 4 OF 4 COMMENTS
POSITIVE  |  NEGATIVE |  NEWEST  |  OLDEST  |  MOST HELPFUL  |  LEAST HELPFUL
USER RATING
7.5
2 USERS
Performances
Script
Music/Soundtrack
Visuals
NA
NA
NA
NA
Can watch again - NA
Good for kids - NA
Good for dates - NA
Wait to rent it - NA
Dev Jyoti Chand on 29th Jan 2013, 11:20am | Permalink
This movie actually has an U level story with some A content tossed in. And of course, lots of stunts for no reason.
I haven't watched the film, but reading most of the reviews and watching Race 1 is enough to know how the film is.
Cheers!
Portuguese Man-of-War on 26th Jan 2013, 10:16am | Permalink
Funny review :)
Rajeev on 26th Jan 2013, 5:07am | Permalink
"...until their hands are raw from high-fiving, after which they probably shout out "CLIMAX!" together..."

Mann, these guys climax just by high-fiving each other? They should never make a movie with Sunny Leone. Hahaha.

ADVERTISEMENT
This page was tagged for
Race 2 hindi movie
Race 2 reviews
release date
Anil Kapoor, Saif Ali Khan
theatres list
Follow @fullhyderabad
Follow fullhyd.com on
About Hyderabad
The Hyderabad Community
Improve fullhyd.com
More
Our Other Local Guides
Our other sites
© Copyright 1999-2009 LRR Technologies (Hyderabad), Pvt Ltd. All rights reserved. fullhyd, fullhyderabad, Welcome To The Neighbourhood are trademarks of LRR Technologies (Hyderabad) Pvt Ltd. The textual, graphic, audio and audiovisual material in this site is protected by copyright law. You may not copy, distribute, or use this material except as necessary for your personal, non-commercial use. Any trademarks are the properties of their respective owners. More on Hyderabad, India. Jobs in Hyderabad.