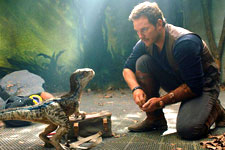 Kritika Deval / fullhyd.com
EDITOR RATING
6.0
Performances
Script
Music/Soundtrack
Visuals
6.5
4.5
6.0
7.5
Suggestions
Can watch again
Yes
Good for kids
No
Good for dates
Yes
Wait for OTT
No
In this, the year 2018 of the Common Era, we are stood at a precipice, as we come to understand the chaos that humans create to the order of the world as we understand it by the fact of our mere existence. As you start off watching the latest chapter in the newest Jurassic World arc, this awareness comes across loud and clear.

The tale begins with a heist, an impending catastrophe, and a butting of heads between the cynical and the hopeful. Isla Nublar is home to the last of the dinosaurs, and also to an active volcano that threatens to obliterate the whole island. Out in the "real world", the debate on whether or not these beings created for human entertainment are deserving of rescue seems to be going firmly for The Man rather than the hippy environmentalists who want to relocate the dinosaurs to a safer location.

Claire Dearing (Bryce Dallas Howard), founder of the supremely imaginatively named Dinosaur Protection Group, finds an unexpected ally in Sir Benjamin Lockwood (James Cromwell), former partner of the original Big Bad and creator of this entire mess John Hammond, who wants her to mount a rescue mission along with his aide Eli Mills (Rafe Spall). She convinces Owen Grady (Chris Pratt), Navy veteran and former co-employee at Jurassic World, to join the mission by prodding at his soft spot for Blue, a Velociraptor he had raised. The mission, ostensibly, is to move the dinosaurs to a secret location where they can flourish without any human interference. However, the vagaries of human nature prove to be as dangerous as the irascible beasts our heroes are attempting to rescue, and the whole thing descends into chaos as it becomes clear that there is treachery afoot.

If you aren't really looking for a plot, the first half is great. There's all kinds of action and cloak-and-daggery. The CGI is utterly fantastic. The violence and chaos is carefully choreographed to keep you in constant danger of falling off the edge of your seat. It's the second half that causes problems, because, as awesome as Jurassic World: The Fallen Kingdom is at portraying the chaos caused by prehistoric creatures in the present day, the humans are often tedious, predictable and not very likeable in general.

Chris Pratt's character is a washed out Peter Quill, who clearly spends his nights dreaming of being as witty as Marvel. Bryce Dallas Howard plays a right Mary Sue and comes off as rather sanctimonious. Rafe Spall, James Cromwell and the rest of the cast show a tedious amount of moral ambiguity. The environmental and ethical aspects of the scenario the film starts off exploring are completely abandoned once the villains start being a lot less ambiguous about their villainy. Isabella Sermon plays a little girl called Maisie, whose various improbable escapes are the only consistent plot device, apart from the fact that dinosaurs are prone to squishing people, especially the annoying kind who are both greedy and stupid.

The point stands, though, that dinosaurs are awesome. The second half has a lot of extremely tiresome treachery. People are captured. Plots are uncovered. The plot of the movie, whatever is left of it, goes for a toss, and we totally sympathize with the magnificent creatures who just want to stomp and chew their problems away and live happily ever after.

In lieu of being people and not being giant reptiles with razor sharp teeth, we wondered about any number of things, like how, if we were to remain true to canon, is the United States of fiction not a post-apocalyptic wasteland, beset as it is by monsters and warlords, or if the United States is actually a video game with a reset, or how governance works in such an enormously unstable nation and so on and so forth.

You could do the same, or you could just sit back and enjoy this film for what it is, a story of dinosaurs being badass while the people around are getting nowhere trying to not run out of a plot that probably has to last them another couple of sequels. It can all be rather cathartic.
Share. Save. Connect.
Tweet
JURASSIC WORLD: FALLEN KINGDOM... SNAPSHOT
JURASSIC WORLD: FALLEN KINGDOM (HINDI) SNAPSHOT 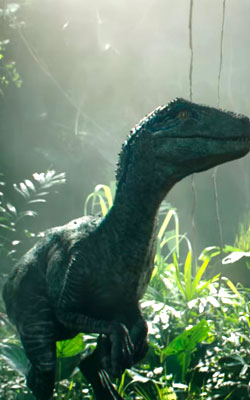 ADVERTISEMENT
This page was tagged for
Jurassic World: Fallen Kingdom (Hindi) hindi movie
Jurassic World: Fallen Kingdom (Hindi) reviews
release date
Chris Pratt, Bryce Dallas Howard
theatres list
Follow @fullhyderabad
Follow fullhyd.com on
About Hyderabad
The Hyderabad Community
Improve fullhyd.com
More
Our Other Local Guides
Our other sites
© Copyright 1999-2009 LRR Technologies (Hyderabad), Pvt Ltd. All rights reserved. fullhyd, fullhyderabad, Welcome To The Neighbourhood are trademarks of LRR Technologies (Hyderabad) Pvt Ltd. The textual, graphic, audio and audiovisual material in this site is protected by copyright law. You may not copy, distribute, or use this material except as necessary for your personal, non-commercial use. Any trademarks are the properties of their respective owners. More on Hyderabad, India. Jobs in Hyderabad.