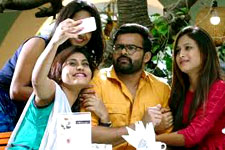 T J Reddy / fullhyd.com
EDITOR RATING
1.5
Performances
Script
Music/Soundtrack
Visuals
2.0
2.0
4.0
3.0
Suggestions
Can watch again
No
Good for kids
No
Good for dates
No
Wait to rent it
Yes
A filmmaker needs to do some cursory research about the armed forces' operations before making a film about them. We know many filmmakers plug in the army as a shield to avoid criticism of their movies, but the armed forces are busy shielding the nation from more important things, and it's disrespectful to use them to deflect the, mostly warranted, criticism of these movies.

In the pathetic attempt at entertainment that Jawaan is, we are introduced to two children with two differing worldviews. One is good boy Jai (Sai Dharam Tej) who'll do anything for his country, and the other is bad boy Keshav (Prasanna) who'll do anything for money. Stick to these character descriptions with all your might as this is as much character development as either of them is afforded.

After an altercation involving 7th-grade exam papers, the two boys are separated. As time goes by, Jai grows up, joins the RSS (blatant political shilling), and aspires to be a scientist at the DRDO. Keshav, however, grows up to become a terrorist. And when he is tasked with procuring the DRDO's newest weapon, Octopus, for malicious purposes, the only one with the capability to stop him is Jai (yes, not even the entire Indian Army). And in one hare-brained sequence after the other, the movie throws out contrived lines and hackneyed scenes which seem to be ripped straight out of the '80s. But under this veil of terrible filmmaking are some truly troubling ideas and ideals.

When a film says that an untrained man interviewing to be a scientist is a better line of defense against a terrorist than the nation's highly trained police, intelligence and armed forces, it is callous storytelling that makes thousands of soldiers and police officers look like schmucks. And that is but the start of the issues plaguing this atrocious movie. Jawaan is what you get when you take the already atretched Dhruva and add even more BS to it till the story caves in on itself unable to sustain the load. The movie is such a shameless rip-off of Dhruva that it actually has a scene of the latter playing in it.

My wit is not strong enough to cleverly elaborate on the other heinous bollocks this film has the audacity to put on screen, but here are a few attempts:

1. There are bad guys literally five steps away in different places from multiple members of the hero's family. In the time it takes them to cover one more step, our hero calls the cops and said cops make their way from their respective police stations to every member of his family, ultimately saving all of them.

2. At a juncture in the film, a tense scene begins, and suddenly a song happens out of nowhere, and the tense scene then continues as if nothing happened. I've never wanted to punch a movie in the face more.

3. The villain's evil lair starts at a clothing shop in a busy market and ends up in a gas cylinder company's go-down because all this film was missing was a poorly rendered CGI explosion.

The acting is unashamedly sub-par. Sai Dharam Tej's character has a one-track mind, and he doles out a one-expression performance. Mehreen Pirzada's Bhargavi adds nothing to the film except for 50 minutes of runtime, and the generally excellent Prasanna is trying hard to escape Aravind Swamy's shadow from Dhruva.

All these issues compound your frustration to such a high degree that you find yourself unable to enjoy the movie's one good song or a handful of interestingly shot scenes. The film does have some compelling music attached to Keshav, and gives its lead pair a hummable romantic track. While these aspects are quite likable, they are wedged in between unimaginatively-shot scenes which dulls their effect. The director's creativity begins and ends with low-angle and slow-mo shots. He seems to have forgotten that film is a visual medium.

Apart from a blink-and-you'll-miss-it section of the second half that has some enjoyable interplay between Jai and Keshav, the movie has little to offer in terms of half-decent filmmaking. Note to filmmakers: If you can't make a good movie, then don't make a movie. You should consider that before you pick your cameras ever again.

P S: No, I did not miss the underhanded potshots at a certain religion. Overcompensating for them by having one frame of a guy holding a flag or a character with a certain name does not excuse your not-so-subtle jabs.
Share. Save. Connect.
Tweet
JAWAAN SNAPSHOT 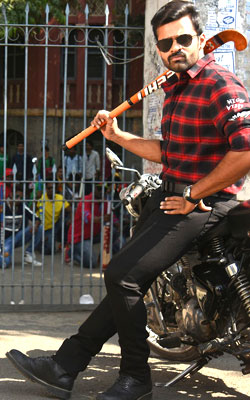 See Jawaan full details
JAWAAN USER REVIEWS
1 - 1 OF 1 COMMENTS
POSITIVE  |  NEGATIVE |  NEWEST  |  OLDEST  |  MOST HELPFUL  |  LEAST HELPFUL
The Common Movie Goer on 2nd Dec 2017, 1:12pm | Permalink
Nooooo! Of all the films, you had to pick on the perfect film that was Dhruva? As a millennial, I am offended. I love Sai Dharam Tej, the man's like PK. You can't help but like him. I thought misplaced songs appearing out of nowhere were a VV Vinayak special (Just to be clear, I think V V Vinayak is the greatest director in Tollywood. It's his afterthought song editing that sucks).

Could you elaborate on the Pedavanchuna song? Is that worth your money? Please let me know. I hope I can rate the movie a 6.0 after watching it.
TJ Reddy on 3rd Dec 2017, 9:16am | Permalink
I am one of those select few who did not like Dhruva as much as everyone else. The simple reason is that it boasts of being a super-intelligent film while it has flaws in every single sequence.

Mate, trust me on this. This film is not worth your money unless you go in to laugh at it wholeheartedly. It is truly atrocious. if you saw the notes I took while reviewing this film you'd be shocked at the extent of horrid filmmaking permeating it.
SBCREDDY on 7th Dec 2017, 4:56pm | Permalink
TJ garu...what ails Tollywood today??same old stories zero creativity...what do you think is going wrong?
TJ Reddy on 9th Dec 2017, 7:37am | Permalink
There are a lot many more things than just those SBC Reddy garu. One of our reviewers here at fullhyd (Josh) had a fantastic discussion with one of the readers about this. I'll link to it in the comments section as soon as I find it.
LEAVE A COMMENT
fullhyd.com has 700,000+ monthly visits. Tell Hyderabad what you feel about Jawaan!
MORE MOVIES
Latest Reviews
The 355
83
83 - Telugu
Shyam Singha Roy
The Matrix Resurrections - H...
more
The Matrix Resurrections
Pushpa: The Rise - Hindi
Pushpa: The Rise
Spider-Man: No Way Home
Spider-Man: No Way Home - Hi...
Spider-Man: No Way Home - Te...
Chandigarh Kare Aashiqui
Akhanda
Satyameva Jayate 2
Ghostbusters: Afterlife
Contemporary Reviews
Oxygen
Tera Intezaar
Firangi
Malli Raava
Sapthagiri LLB
more
Fukrey Returns
Borg McEnroe
Murder On The Orient Express
Coco
Julie 2 (Telugu)
Julie 2
Mental Madhilo
Balakrishnudu
The House Next Door
Random Reviews
Badri
Pearl Harbor (English)
Queen Of The Damned
Naaga
Pyaar Mein Twist
more
Shiva 2006 (Telugu)
Hungama In Dubai
Mahanagaram
Taj Mahal (Telugu)
Stanley Ka Dabba
Bittoo Boss
Gippi
Veta
Surya Vs Surya
Annabelle Comes Home (Telugu...
SEARCH MOVIES
Dissatisfied with the results? Report a problem or error, or add a listing.
ADVERTISEMENT
SHOUTBOX!
{{todo.name}}
{{todo.date}}
[
ip{{todo.ip}}
]
{{ todo.summary }}... expand »
{{ todo.text }} « collapse
First  |  Prev  |   1   2  3  {{current_page-1}}  {{current_page}}  {{current_page+1}}  {{last_page-2}}  {{last_page-1}}  {{last_page}}   |  Next  |  Last
{{todos[0].name}}

ADVERTISEMENT
This page was tagged for
Jawaan telugu movie
Jawaan reviews
release date
Sai Dharam Tej, Mehreen Pirzada
theatres list
Follow @fullhyderabad
Follow fullhyd.com on
About Hyderabad
The Hyderabad Community
Improve fullhyd.com
More
Our Other Local Guides
Our other sites
© Copyright 1999-2009 LRR Technologies (Hyderabad), Pvt Ltd. All rights reserved. fullhyd, fullhyderabad, Welcome To The Neighbourhood are trademarks of LRR Technologies (Hyderabad) Pvt Ltd. The textual, graphic, audio and audiovisual material in this site is protected by copyright law. You may not copy, distribute, or use this material except as necessary for your personal, non-commercial use. Any trademarks are the properties of their respective owners. More on Hyderabad, India. Jobs in Hyderabad.