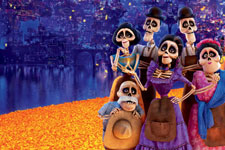 T J Reddy / fullhyd.com
EDITOR RATING
7.5
Performances
Script
Music/Soundtrack
Visuals
8.0
8.0
9.0
9.0
Suggestions
Can watch again
Yes
Good for kids
Yes
Good for dates
Yes
Wait to rent it
No
This review is in poem to parallel a movie that celebrates song
We keep it in simple couplets, as with rhyming two lines we can do no wrong

Keep yourselves warm by the heat of the campfire
For the story straddles the lands of the living and the dead, a treacherous high-wire

Miguel's abuelita (grandmother) Elena (Renee Victor) has reasons to be so sour
Her grandfather abandoned his family for his music, leaving them alone in their darkest hour

However, Miguel figures a way to express himself via a talent show on The Day Of The Dead
Being privy to this information, his abuelita kills his guitar until it's dead

He soon realizes that he can't display his musical talents without a guitar
He decides to rob De La Cruz's mausoleum for one, hoping it'll win him hearts as the new pop star

Alas, you don't rob from the dead on a day meant to honour them
Banishment to the beautiful land of the dead is the cruel outcome

He meets all the departed members of his family while trying to find a way out
He refuses their help as his goal is meeting De La Cruz, no ounce of doubt

He traverses the highs and lows of this vividly animated world
With a comedic bag of bones Hector (Gael Garcia Bernal), who a chorizo got into the underworld

It is a story that traverses dangerous landscapes of life, family, loss, fame, culture and death with such finesse
Your brain is distracted by the beautiful Mexican culture while your heart turns emotional because it has given the film full access

Miguel, his family, Hector and De La Cruz are entertaining to a tee
Pardoning some seen-it-before moments will make this more entertaining, you'll see

Anthony Gonzales, Gael Garcia Bernal and Benjamin Bratt's performances keep their vivid world from overpowering the emotions
So much so that the tender moment Miguel and Coco share at the end stands out amidst a whole lot of commotion

The colours are splendid, the world is inspired and the animation details the smallest wisp
But while visual excellence courses through its veins, the movie's editing isn't very crisp

But the child in you rarely cares about that when the story is so clear
And even if you don't, the kid next to you will hold this film dear

Isn't that what we want - a story that helps our children grow good
And hidden beneath that, one for us grown-ups that speaks of our childhood?

So take any carping with a grain of salt and spend your weekend at the cinema with the kids
There'll be a few winks and many laughs until one of you busts one of your ribs!
Share. Save. Connect.
Tweet
COCO SNAPSHOT 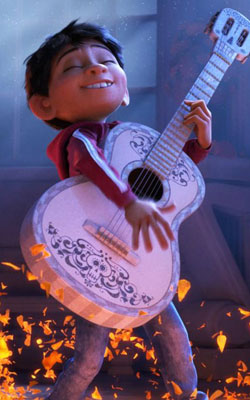 Has llevado las rese
TJ Reddy on 29th Nov 2017, 9:41am | Permalink
It is quite good and crowd-pleasing for sure. The creativity shown in world-design and rules of engagement in the afterlife caught my attention a whole lot.
The Common Movie Goer on 28th Nov 2017, 11:23pm | Permalink
Wow! Just, wow! A review in poem format? Excellent writing, and captured the essence of the film to boot. Me quito el sombrero, amigo. Except for that *one* scene where the entire theatre groaned collectively (in a "get on it with it already" way), brilliant story which and animation which just keep rising.
RATING
9
TJ Reddy on 29th Nov 2017, 9:40am | Permalink
The editors deserve a good deal of credit for polishing the review. Thanks, TCMG.

ADVERTISEMENT
This page was tagged for
Coco english movie
Coco reviews
release date
Anthony Gonzalez, Gael García Bernal
theatres list
Follow @fullhyderabad
Follow fullhyd.com on
About Hyderabad
The Hyderabad Community
Improve fullhyd.com
More
Our Other Local Guides
Our other sites
© Copyright 1999-2009 LRR Technologies (Hyderabad), Pvt Ltd. All rights reserved. fullhyd, fullhyderabad, Welcome To The Neighbourhood are trademarks of LRR Technologies (Hyderabad) Pvt Ltd. The textual, graphic, audio and audiovisual material in this site is protected by copyright law. You may not copy, distribute, or use this material except as necessary for your personal, non-commercial use. Any trademarks are the properties of their respective owners. More on Hyderabad, India. Jobs in Hyderabad.