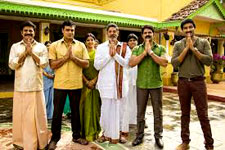 T J Reddy / fullhyd.com
EDITOR RATING
2.0
Performances
Script
Music/Soundtrack
Visuals
3.0
2.0
1.0
3.0
Suggestions
Can watch again
No
Good for kids
No
Good for dates
No
Wait to rent it
Yes
Oxygen is a near three-hour anti-smoking ad by producer A M Ratnam and his baby boy, which actually led to a whole host of young men lighting up a cigarette as soon as they walked out of the cinema that I was in. They needed a quick release that would stop them from tearing their hair out after sitting through this abomination masquerading as a movie. If you were to heed our advice, you'd stay home, rewatch those (frankly impotent) anti-smoking ads on YouTube and save yourself some time and money.

The film starts and stays relatively humble before it gets into a nearly unwatchable second half. After two "sharpshooters" kill his brother, respected village-based businessman Raghupathi (Jagapathi Babu) decides to get his only daughter Shruthi (Raashi Khanna) married to a dashing man whose details his brother had shared with him before his death. The man is apparently an orphan, lives in the USA and works at Microsoft - a perfect suitor for any Telugu bride.

As the ideal Telugu bachelor, Krishna Prasad (Gopichand), makes his way back from the USA, he is greeted by his factionist in-laws and a whole lot of contrived scenes to make him appear amazing. With a smile so plastic that it would make Aishwarya Rai blush, he makes his way into the hearts and minds of the gigantic family he is about to marry into. Soon, he neutralizes the threat his new family faces from the leader of the opposing faction led by Veerabhadram (Sayaji Shinde) by duly bludgeoning them.

All is seemingly well. But there are two nagging issues the film has yet failed to address. Firstly, who are the people killing members of Raghupathi's family? Secondly, why is Anu Emmanuel's name on the credits and where is she? The answers come soon enough, but (because we are doing smoking-related metaphors) these revelations just plunge a giant syringe of tar into an already pointless film, stopping it dead in its tracks. The reveals are accompanied by loud noises and over-the-top camerawork, and all the show is at the end nothing but hot, black, carbon-filled air. Come to think of it, it is ironic that the film is titled Oxygen.

Oxygen's script is a Frankenstein's monster of every action movie cliché of the past decade. The film begins as a thematic recreation of Vijay's introduction from Adhirindi and ends as an ungodly amalgamation of the ideas in Thuppaki and Khaidi No 150. However, these rip-offs are much easier to swallow as everything in between these two extremes is stuffed with a myriad of boring noise and cheap attempts at garnering audience sympathy.

The film throws factionism, the army, dead family members, an item song, two heroines, some random message somehow shoehorned in and (bad) CGI into the mix and hopes that it will all somehow work. If you want a coherent plot with characters you care about, you're not the target market.

Gopichand himself seems to have realized what he got himself into after he put pen to paper because this is one of the blandest performances you are likely to see from this underused actor. He does not bring his A-game, and that does not seem like an accident.

His co-stars follow suit. Raashi Khanna continues her streak of being wholly forgettable, and Anu Emmanuel, who put in a brilliant shift in Detective, stares into your soul with all the expressiveness of a puppet - it almost appears like her cardboard cutout was used here. The lesser said about Jagapathi Babu and his merry family the better, and anyone who justifies the presence of Sayaji Shinde, Ali, Venella Kishore and Tagubothu Ramesh is either the film's director or... actually, I can't think of anyone else.

P S: At the climactic fight, watch as one stationary CCTV camera cuts between ten different angles, has bullet time effects and slow motion, all while relaying a LIVE FEED to the world. *Sigh*

P P S: Please watch Thank You For Smoking or The Insider instead.
Share. Save. Connect.
Tweet
OXYGEN SNAPSHOT 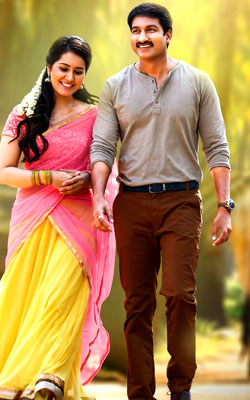 See Oxygen full details
OXYGEN USER REVIEWS
1 - 5 OF 5 COMMENTS
POSITIVE  |  NEGATIVE |  NEWEST  |  OLDEST  |  MOST HELPFUL  |  LEAST HELPFUL
Hari on 2nd Dec 2017, 11:02pm | Permalink
This and Jawan back to back? You deserve better TJ !!
Insider - now that's a movie on a whole different level. Russel Crowe was absolutely fantastic. Thanks for the reminder. Will re-watch it sometome soon.

-Hari
TJ Reddy on 3rd Dec 2017, 9:08am | Permalink
Taking some hits for the team, my man. The Insider is pretty good but make some time to watch Thank You For Smoking. I rate that film an 11/10 even if the ending is a wee bit wonky.
Hari on 4th Dec 2017, 10:24pm | Permalink
I watched it on the weekend TJ. I thought it lived up to your high praise. I liked the slick title cards too. Most of the writing was super fun with many quotable lines. I esp liked that movie idea :) Good stuff.

-Hari.
TJ Reddy on 4th Dec 2017, 11:12pm | Permalink
It's a movie that makes you root for the bad guy without even realizing it. It takes immense skill to write something so dark. I rewatch it when I hit writer's block. Clears things right up.
The Common Movie Goer on 2nd Dec 2017, 1:05pm | Permalink
Dude, I am sorry for wishing for more 1.0s and 2.0s from Fullhyd the other day. Didn't expect you to have such rotten luck with movies this weekend. Great reco on Thank you for Smoking. Loved that movie when I saw it a few years ago. Everyone here thinks I see way too many movies, but I am beginning to think you've truly seen them all. I wish I could follow you on Twitter or FB or something. (Also, Deepa Garimella, if you are reading this, what happened to your Twitter account? It was the wittiest thing in existence!)

Gopichand needs to stop asking fans to "gundelu meeda cheyya vesukuni padukkovandi! Ee sari gattiga koduthunnam." He's slowly becoming the god of generic, template-based, done-to-death films. Even Kona Venkat has moved on from fool-the-whole-family movies. It's time everybody else does.

Disappointed reading about Anu Emmanuel. I've had enough of Rakul Preet Singh and her shtick. She needs some competition from those that are just as beautiful. Didn't even know Yuvan Shankar Raja was the composer. Trailer was wholly forgettable.

All said and done, hope to watch this film soon and bitch about it. I guess it's people like me who are responsible for these films being made. Oh well, what's life without a little burnt masala?
TJ Reddy on 3rd Dec 2017, 9:05am | Permalink
Rotten luck is not the right way to look at it, dude. It is just a malaise that goes around the commercial cinema genre. Luck has nothing to do with it when people making the films are not even trying to be any form of good.

1s and 2s get me riled up instead of amused and I really hate getting angry so that compounds my anger. I hate feeling like this.

ADVERTISEMENT
This page was tagged for
oxygen Telugu movie full
Oxygen telugu movie
Oxygen reviews
release date
Gopichand, Raashi Khanna
Follow @fullhyderabad
Follow fullhyd.com on
About Hyderabad
The Hyderabad Community
Improve fullhyd.com
More
Our Other Local Guides
Our other sites
© Copyright 1999-2009 LRR Technologies (Hyderabad), Pvt Ltd. All rights reserved. fullhyd, fullhyderabad, Welcome To The Neighbourhood are trademarks of LRR Technologies (Hyderabad) Pvt Ltd. The textual, graphic, audio and audiovisual material in this site is protected by copyright law. You may not copy, distribute, or use this material except as necessary for your personal, non-commercial use. Any trademarks are the properties of their respective owners. More on Hyderabad, India. Jobs in Hyderabad.