The House Next Door Review 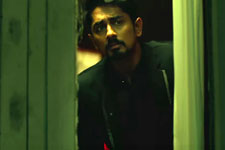 T J Reddy / fullhyd.com
EDITOR RATING
6.5
Performances
Script
Music/Soundtrack
Visuals
8.0
6.0
8.0
9.0
Suggestions
Can watch again
Yes
Good for kids
No
Good for dates
Yes
Wait to rent it
No
Gruham starts with director Milind Rau offering his thanks to The Devil. This is a sign of things to come, and an indicator that Indian cinema's streak of producing sub-par and sloppily-made horror films is about to be snapped. The film features a cast and crew with vision, creativity, craft and a sense of humour, and they bring it all to screen beautifully.

The movie starts with a wonderfully-shot, two-minute black and white prologue, followed by a few frames of discomforting, mood-building and tone-establishing static. One Insidious/Conjuring-inspired title card later, you are introduced to the happy couple of brain surgeon Krishnakanth (Siddharth) and his homemaker wife Lakshmi (Andrea Jeremiah). After a bit of gloss and candy, the movie flashes back to show their history.

Their courtship is filmy yet grounded, and their wedding is devoid of religious hoopla. The movie is busy throwing out important information masquerading as innocuous details. By means of this montage, the movie establishes its main characters, and without a line being uttered, while showing the audience their atheistic tendencies. Respecting your audience - refreshingly clever.

Soon after, a family of six moves into the house next door. The family comprises of an old patriarch, his son Paul, Paul's wife, a Chinese maid and their two daughters - the younger one Sarah and the older troubled teen with a crush on Krishnakanth, Jenny. Moving into a house with an ominous cross lit by a red light does not bode well for anyone, and soon enough Jenny begins to her journey into being possessed by a demon. And Krishnakanth rallies his troops, which include a pastor (Prakash Belawadi), a psychiatrist (Suresh) and the girl's dad (Atul Kulkarni), in an attempt to free her from the demons in her mind and the ones that surround her world.

While this plot might seem textbook clichéd, the movie aspires to be something more than its humble baseline. It also does little to hide its influences and the classics it's trying to emulate. The characters read The Exorcist and The Shining, specific scenes of the film ape David Cronenberg's patented body horror, and the creature design and motivation is reminiscent of J-horror classics The Ring and The Grudge. The film packs a few more references to the most hardcore of horror fans, and they'd hold me in the same standing as The Devil himself if I were to spoil it for them.

The movie's success however lies with its clever use of the many tropes set by its many predecessors. Blatant copy-paste screenwriting and directing are replaced by clever subversion of clichés and effective filmmaking techniques. The care put into lighting, staging and pacing the film are for all to see, and all this is achieved by sticking to the basic tenets of filmmaking which so many modern films refuse to adhere to.

On the contrary, this adherence to formula works as a double-edged sword. A seasoned horror fan privy to the movie's influences knows its twists and turns a few minutes before they materialize on screen, which robs the film of a sense of unpredictability. Secondly, reverse engineering the film from climax to prologue leaves a trail of lapses in logic. Like many a horror film before it, the movie prefers convenience over creativity in its late second and third acts.

Through the cavalcade of good and bad writing, the movie has two shining stars on top of the hill working tirelessly to keep it from falling into the murky waters of mediocrity. The first of which is the acting. The trio of Siddharth, Suresh and breakout star Anisha Angelina Victor play extremely distinct yet pivotal characters with aplomb. While every other cast member is putting in their shift by selling the world the movie creates for them, the aforementioned trio are the best of an extremely talented bunch. If there is any gripe to be had, it comes in the form of a slightly underused Andrea Jeremiah and a couple of child actors who are serviceable at best.

Second, the world surrounding these actors is flawlessly constructed. The cool blue hues of the hilly setting contrast magnificently with the harsh reds of the claustrophobic haunted houses. The spirits roaming these houses are rendered to near perfection (barring a few moments of hokey CGI) by a dedicated team of effects wizards and makeup artists. These individual parts are captured by Shreyaas Krishna's eerie camerawork to make a satisfying whole for the audience to revel at.

As with the acting, a solitary gripe with the crew's near flawless filmmaking comes in the form of the score - unable to find a balance with the exquisite sound design and foley work, the movie's soundtrack resorts to being a needless sequence of unyielding screams when dealing with the supernatural. The double-edged sword of sticking to formula rears its ugly head again.

As we learned before, this works at thwarting the movie from being a work of true genius that would stand the test of time. While the film possesses the requisite raw materials and gives itself a fair shot at being a clever psychological horror movie or an unabashedly discomforting body horror classic, it squanders its potential by taking a brand safe route that is meant to appeal to a mass audience. As you may begin to feel disappointed, I'd direct your attention to the many Raazes, Ragini MMSes, Next Nuvves and Raju Gari Gadhis of the world. 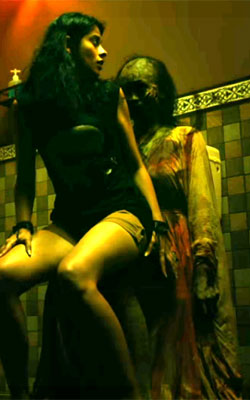 ADVERTISEMENT
This page was tagged for
The House Next Door hindi movie
The House Next Door reviews
release date
Siddharth, Andrea Jeremiah
theatres list
Follow @fullhyderabad
Follow fullhyd.com on
About Hyderabad
The Hyderabad Community
Improve fullhyd.com
More
Our Other Local Guides
Our other sites
© Copyright 1999-2009 LRR Technologies (Hyderabad), Pvt Ltd. All rights reserved. fullhyd, fullhyderabad, Welcome To The Neighbourhood are trademarks of LRR Technologies (Hyderabad) Pvt Ltd. The textual, graphic, audio and audiovisual material in this site is protected by copyright law. You may not copy, distribute, or use this material except as necessary for your personal, non-commercial use. Any trademarks are the properties of their respective owners. More on Hyderabad, India. Jobs in Hyderabad.