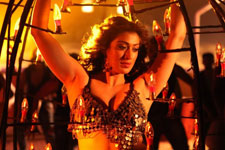 T J Reddy / fullhyd.com
EDITOR RATING
1.0
Performances
Script
Music/Soundtrack
Visuals
2.0
1.0
1.0
1.0
Suggestions
Can watch again
No
Good for kids
No
Good for dates
No
Wait to rent it
No
One the many trailers that preceded Julie 2 was that of Padmavathi. While that film may not find its way to the cinemas next weekend, it has some epic background music and a very cheesy Shahid Kapoor speech where he waxes poetic about what constitutes a great Rajput. It's funny because you can switch the word "Rajput" with the name of any other community and it would have the same effect. There is nothing unique to it. Little did I know that this innocuous trailer I've watched 20 times this month alone would be so pivotal for this review.

Yes, I was experiencing déjà vu, and not of something good. Now I look to the skies, ball my fist and say "damn you" with an exasperated expression. But before we get to why I reference that trailer and why this movie is oh so awful, all 1% of you who think this film has a coherent plot will demand a description of it.

Listen up Julie 2 - I'll adapt Shahid Kapoor's speech about what makes a good Rajput, to list out all the things that make you an ugly film-going experience.

2. If your movie about female empowerment begins with a vulgarly shot item song, you're a bad movie

3. If your director credits himself four times, including having his name in the title itself, you're a bad movie

4. When you think using the words condom and prostitute makes you edgy and daring, you're a bad movie

5. When you think you can trick your audiences into thinking your main character dies 20 minutes into the movie, you're a bad movie

6. When you think police officers greet each other with Jai Hind and nothing else, you're a bad movie

7. When you show Indian news playing on an Istanbul news channel, you're a bad movie

8. When your "imposing" police officer (who doesn't know how to hold a phone) says he has a "dhai foot ka haath" bastardizing a popular line, you're a bad movie

9. When you name a driver Ambani to push your agenda, you're a bad movie

10. When you waste Pankaj Tripathi's time and skill on this smut, you're a bad movie

11. When you have a scene that has Julie (Raai Laxmi) do an item song after she says she's heartbroken, you're a bad movie

12. When your camerawork is so bad that even your shots of your actresses' breasts cannot titillate the men, you're a bad movie

13. When you lead actress can't give a half decent performance to save her life, you're a bad movie

14. When you ruin what could have been a bad yet watchable murder mystery by inserting dialogues insinuating genital mutilation, you're a bad movie

15. When your character screams "Get going you dirty man" at the camera as an implied insult to the audience who paid their good money to watch your piece of dog crap movie, you're a horrible ****ing movie

And finally, **** you, you've made a god-awful movie that only Mr Nihlani thinks is relevant and/or sensual. God, I hate this movie.
Share. Save. Connect.
Tweet
JULIE 2 SNAPSHOT 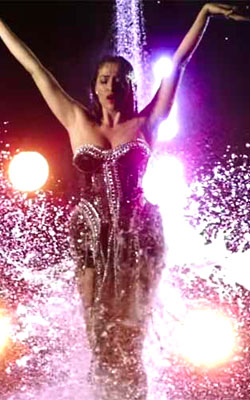 ADVERTISEMENT
This page was tagged for
Julie 2 hindi movie
Julie 2 reviews
release date
Raai Laxmi, Pankaj Tripathi
theatres list
Follow @fullhyderabad
Follow fullhyd.com on
About Hyderabad
The Hyderabad Community
Improve fullhyd.com
More
Our Other Local Guides
Our other sites
© Copyright 1999-2009 LRR Technologies (Hyderabad), Pvt Ltd. All rights reserved. fullhyd, fullhyderabad, Welcome To The Neighbourhood are trademarks of LRR Technologies (Hyderabad) Pvt Ltd. The textual, graphic, audio and audiovisual material in this site is protected by copyright law. You may not copy, distribute, or use this material except as necessary for your personal, non-commercial use. Any trademarks are the properties of their respective owners. More on Hyderabad, India. Jobs in Hyderabad.