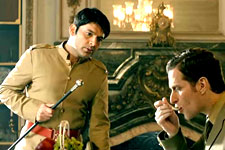 T J Reddy / fullhyd.com
EDITOR RATING
4.5
Performances
Script
Music/Soundtrack
Visuals
6.0
3.0
5.0
6.0
Suggestions
Can watch again
No
Good for kids
Yes
Good for dates
No
Wait for OTT
Yes
When he used to teach filmmaking at Columbia University, reputed director Milos Forman's first lesson to aspiring writers was as follows: "If your story tells the audience two plus two is four, it has no reason to exist." This simply meant that if a story only reaffirmed an audience's pre-existing beliefs without ever giving them a fresh perspective, the storyteller had failed his craft.

Most filmmakers refuse to adhere to this very simple rule for a myriad of reasons. And in Firangi producer/star Kapil Sharma and writer/director Rajiev Dhingra do not buck the trend.

Set in pre-independence/pre-partition India, Firangi follows a specific time in the life of Mangatram aka Manga (Kapil Sharma). Manga is the village's unanimously anointed loser. He does not have a job or any prospects for one, and he does not have a lady love. However, like Liam Neeson, he does have a very specific set of skills. His kicks cure people of their back pain. This skill leads to him rectifying all those aforementioned problems with his existence.

Manga gets a job as an orderly in the quarters of British Officer Mark Daniel (Edward Sonnenblick) after curing the latter of his backache. During his visit to the Naku Guda village to attend his friend's wedding, Manga sees and falls in love with village belle Sargi (Ishita Dutta). With a gaon wali gori and a job conveniently falling in his lap, Manga instructs his family to ask the lady's parents for her hand in marriage. But with the freedom struggle gaining traction, his dreams are thwarted as the elders of the village point to his working for the British as their prime reason for not accepting his alliance.

Meanwhile, the province's King, Raja Indraveer Singh (Kumud Mishra), prepares a deal that would have an alcohol-manufacturing plant built over the village illegally. This deal has a contingency that states that officer Daniel gets the hand of princess Shyamali Devi (Monica Gill) in marriage. Manga finds himself caught in the eye of the storm as he attempts to save his relationship, save the princess and save the village all in one swift motion.

Edward Sonnenblick was inspired by Lagaan to quit his job as a chef in California and move to India in search of acting roles. Sadly for him, he finds himself in a film which that is quite like Lagaan except that it does not have the Khan, the Gowariker, the cricket, the overall intelligence or the prestige.

In its first half, Firangi chooses to tell a smart story spanning many characters and themes. The colourful cast of villagers speaks of Gandhi's non-violent protests, asks if every Englishman is actually bad, speaks of the good the British invasion did to India, and dwells on many such complex subjects. There is a maturity here that you wouldn't expect from a movie starring Kapil Sharma.

But true to form, Sharmaji and his band slowly but surely devolve into their well-known antics by the second half. Gone are the multifaceted views of the freedom struggle and the tender love story, which are replaced by his usual brand of cringe-worthy cross-dressing, senseless slapstick, predictable tropes and bloated storytelling. The movie soon feels like a whole host of Comedy Nights With Kapil sketches being thinly held together by what once resembled a plot. This is a damn shame since when you look around the film, you find quite a few things to admire.

And one of those things is leading man Kapil Sharma. Doing a complete 180 from his previous venture Kis Kisko Pyaar Karoon, Sharma delivers a wholly lovable performance as the well-meaning Manga. His charm is effortless and his acting is subdued (for the most part). It is easy to forget why so much of the country fell in love with his antics, and this performance does a good job of reminding us.

The many actors surrounding him are not far behind, either. While most of them are given little in terms of character development, they each have a distinct role to play in this massive ensemble, and make the film watchable if not much else.

The score and music accompanying their lives are rarely bombastic, and barring a few shots that are clearly out of focus, the camerawork, and the set and costume designs deserve their fair share of applause.

However, as mentioned before, lurking beneath this beautiful veneer are some poor character work and inane set-pieces. For example, Manga who cannot outsmart the village goat at the outset of the film concocts a plan to trick a king, an officer, and their respective convoys by the end of it. Intelligence is not a by-product of love, as we all know.

It is this level of inanity and a truly awkward climax involving Mahatma Gandhi that take away from the movie's many positive attributes. The film begins nobly by telling the audience that two plus two is five, and stays its course on the road less traveled by trying to prove its view. But somewhere along the line, it loses confidence in itself and reverts to the frequently used boulevard. It finds solace in two plus two equals four, but little does it know that this boulevard is in fact the dark path of mediocrity.
Share. Save. Connect.
Tweet
FIRANGI SNAPSHOT 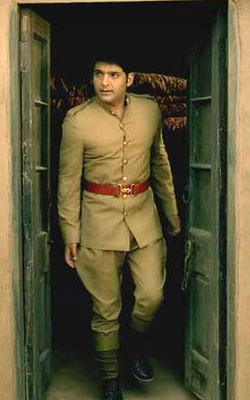 ADVERTISEMENT
This page was tagged for
firangi movie in hindi
Firangi hindi movie
Firangi reviews
release date
Kapil Sharma, Ishita Dutta
Follow @fullhyderabad
Follow fullhyd.com on
About Hyderabad
The Hyderabad Community
Improve fullhyd.com
More
Our Other Local Guides
Our other sites
© Copyright 1999-2009 LRR Technologies (Hyderabad), Pvt Ltd. All rights reserved. fullhyd, fullhyderabad, Welcome To The Neighbourhood are trademarks of LRR Technologies (Hyderabad) Pvt Ltd. The textual, graphic, audio and audiovisual material in this site is protected by copyright law. You may not copy, distribute, or use this material except as necessary for your personal, non-commercial use. Any trademarks are the properties of their respective owners. More on Hyderabad, India. Jobs in Hyderabad.