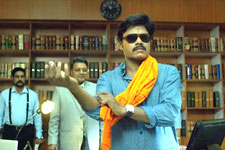 T J Reddy / fullhyd.com
EDITOR RATING
4.0
Performances
Script
Music/Soundtrack
Visuals
6.0
4.0
3.0
4.0
Suggestions
Can watch again
No
Good for kids
Yes
Good for dates
No
Wait to rent it
Yes
Saptagiri LLB, a remake of Jolly LLB like we all know, follows the legal adventures of the titular Saptagiri (Saptagiri) as he moves from Chittoor to the big city in search of fame and fortune. Like a young rowdy who thinks the fast lane to success is taking on the local gangster, Saptagiri naively goes head on with the fearsome lawyer Rajpal (Sai Kumar). Rajpal is defending the privileged grandson of an MLA who has been accused (and nearly acquitted) of killing five beggars by running them over with his car that he was driving when drunk.

Both Saptagiri and Rajpal are morally grey people. While they end up facing off by means of a chance occurrence, little do they know that they need this face-off to mature and evolve as human beings. This, along with a ton of dark comedy and social satire, was the original tale director Subhash Kapoor narrated. The third iteration of his National Award-winning idea is however as watered down as can be owing to either poor communication or the theme being lost in translation or the attempts to appeal to regional sensibilities.

The first red flag is the "additional story" credit given to writer/director Charan Lakkakula. Why would he dare alter an already beloved story that has been market tested for profitability and acclaim? The answer seems simple and therein lies the filmmaker's naivete - the story which was a character-driven satire of the justice system and the many cogs in it has been altered into being a star vehicle for leading man Saptagiri.

The changes made to the original concept come at a considerable price. The movie's A-plot kicks in at the 25-minute mark because it feels the need to subject its audience to everyday Telugu movie fare. This unmistakeably and frustratingly involves hero introduction songs, painfully unfunny comedy tracks, a shoehorned love interest that does not factor into the plot, a couple of fight scenes (one of which involves murder) and every other aspect that one needs to make a four-quadrant "entertainer".

While this brand of excess could be excused in a lesser movie, the themes and characters being discussed here need time and care to be fully explored. Those 25 minutes aren't ones either we as the audience or they as filmmakers are ever getting back. Their loss translates into ours as their failure to adequately explore plot points and tell a logical story hinders our enjoyment of the movie. As the old saying goes, the movie starts as it intends to go on, and that leads to the more powerful sequences of the second half falling flat and ringing hollow.

A sizeable amount of blame for this deficit in overall quality should be shouldered by leading man Saptagiri. A fine actor in his more comedic roles, Saptagiri fails to strike a chord in the more emotional and dramatic moments of this film. The chinks in his acting armour and the immense amount of effort he puts in to appear credible are there for all to see. He is neither imposing enough to go toe-to-toe with the always excellent Sai Kumar nor is he an actor good enough to shoulder the burden of the scene when paired with a lesser actor (Chitti played by Kashish Vohra). He is at his best only when surrounded by an army of character actors (Kota Srinivas Rao, Kitty, Shakalaka Shankar, Siva Prasad who plays a lesser version of Saurabh Shukla etc) and junior artists who try their hardest to make him look larger than life. A needless exercise in a character piece.

On par with this is the film's score. Undercooked scenes when combined with rousing music and loud noises rarely make for good cinematic outings, and this movie acts as proof yet again. The misplaced songs that accompany the miscast heroine are not too far behind.

Contrary to all this garishness is the movie's bland look and hyperactive editing. Even though the set design is something to marvel at, the film's insistence at cutting incessantly between characters even during the simplest of scenes robs it of having moments the audience pay attention to while sinking their teeth into its plot.

In a way, Saptagiri LLB the film, like its leading man, is always toggling between two extremes - Pawan Kalyan and Sampoornesh Babu. By casting Saptagiri and not trusting his acting ability enough, the filmmakers have him caricaturize his character and the overall movie itself. In many moments he / the film is Pawan Kalyan (in both his mannerisms and looks), pretending to be the underdog and fighting for the common man with no dramatic tension whatsoever. At others, the filmmakers double down on his/their comedic sensibilities and create a parody of a serious character/story a la a Sampoornesh Babu vehicle. This radical toggling in tone and characterization in an attempt to serve one too many masters leads to the ultimate downfall of a sometimes finely made movie.

If only the filmmakers believed in themselves as much as Saptagiri believed in the law. The original's theme was that every life was important no matter how big or small. This iteration of the story, somewhat distastefully, misses the point completely in an attempt at being more populist.
Share. Save. Connect.
Tweet
SAPTHAGIRI LLB SNAPSHOT

See Sapthagiri LLB full details
SAPTHAGIRI LLB USER REVIEWS
1 - 1 OF 1 COMMENTS
POSITIVE  |  NEGATIVE |  NEWEST  |  OLDEST  |  MOST HELPFUL  |  LEAST HELPFUL
The Common Movie Goer on 8th Dec 2017, 11:55pm | Permalink
OK, I have to ask. How are you able to write every single review with a different style? Except for some of the dark tones of sarcasm, the analysis, and the name at the top, I am barely able to tell if it's a TJ review. The structures and approaches for the 3 movies you reviewed this week are all different. Is it a conscious effort, or is the editor different each time?
TJ Reddy on 9th Dec 2017, 7:42am | Permalink
TJ is a feel, TJ is an avesham, TJ is an anandam, TJ is a merupu, TJ is a spandana, TJ is a tsunami and TJ might not even be one person but a collective.

ADVERTISEMENT
This page was tagged for
Sapthagiri LLB telugu movie
Sapthagiri LLB reviews
release date
Saptagiri, Sai Kumar
theatres list
Follow @fullhyderabad
Follow fullhyd.com on
About Hyderabad
The Hyderabad Community
Improve fullhyd.com
More
Our Other Local Guides
Our other sites
© Copyright 1999-2009 LRR Technologies (Hyderabad), Pvt Ltd. All rights reserved. fullhyd, fullhyderabad, Welcome To The Neighbourhood are trademarks of LRR Technologies (Hyderabad) Pvt Ltd. The textual, graphic, audio and audiovisual material in this site is protected by copyright law. You may not copy, distribute, or use this material except as necessary for your personal, non-commercial use. Any trademarks are the properties of their respective owners. More on Hyderabad, India. Jobs in Hyderabad.