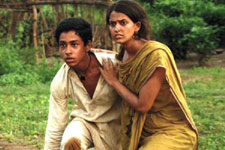 Neha Mathur / fullhyd.com
EDITOR RATING
6.5
Performances
Script
Music/Soundtrack
Visuals
7.0
6.0
8.0
7.0
Suggestions
Can watch again
No
Good for kids
No
Good for dates
No
Wait for OTT
No
History cannot be relegated to the clinical pages of a school textbook. It is not the dead past. On the contrary, history is fraught with conflicting stories, and can be as divisive and contentious as the struggles it sets out to record.

Director Mrityunjay Devvrat attempts to interpret and chronicle one such page from history - the systematic genocide carried out by the West Pakistani militia that wreaked havoc in erstwhile East Pakistan. Children of War looks, pointedly, at the brutal abuse of women that took place during the Bangladeshi liberation war of 1971.

The act of remembering can be a keenly political act. Instead of merely being a hollow medium of honouring victims, it can be a pertinent lesson for the future, if not a cathartic closure for those who suffered and lost.

However, equally imperative to this act of reconstruction is the question - how does one choose to remember? How does a filmmaker choose to tell the story? Devvrat's film gives voice to the Bangladeshi people and their war of independence, placing the film's narrative firmly within a nationalist narrative of resistance.

The director gives voice to the victims of the war of 1971. It is their perspective that forms the meat of the story. Especially important is the space given to the voices of women that occupy a major part in the film's storyline. While they were victimized, we also see glimpses of agency accorded to these women.

The film establishes its ideological standpoint at the very start by putting out for the audience real footage of an interview by Indira Gandhi. The then Prime Minister likens the violent repression used by the Pakistani government to Hitler's crimes against the Jews, thereby justifying India's intervention.

And thus unfolds the dramatic retelling of a horrific chapter in the subcontinent's history. Pakistani soldiers storm the home of Aamir (Indraneil Sengupta), beat him up and abduct his wife, Fida (Raima Sen), who is thrown in a rape camp. A journalist writing for the Bangladeshi cause, Aamir is forced to take up arms and join the resistance army, namely the Mukti Bahini.

A brother and sister, Rafiq (Riddhi Sen) and Kausar (Rucha Inamdar), having lost their parents and home, make a dangerous trek to escape to India. Attacked by Pakistani soldiers, young Rafiq impulsively dons the mantle of the aggressive male protector - a combatant who weeps privately.

Pavan Malhotra plays Malik, a Pakistani army official, brainwashed to the point of no return. A ruthless man who talks lovingly to his gun, he is depicted as absolute evil. Overseeing a rape camp, Malik and his men symbolize the inhumanity of war borne out of a fanatic political ideology.

The atrocities committed by the West Pakistani military, in an attempt to repress the secessionist cause, are laid out bare, unflinching portrayals of rape and slaughter. But, the violence is not gratuitous, because the narrative does not glorify war - not by any means. Interspersed in the story are echoes of voices that spurn revenge in any form, and opine the loss of innocence.

Cinematographer Fasahat Khan has intricately captured the heartbreaking angles and spaces that make up the frames of torture. There is a significant scene where hapless women prisoners fall out of a military truck, very much like cattle. It is shot in near darkness, and it's a while before the absolute horror dawns upon the audience that these are human beings.

Of course, the danger of aestheticizing brutality always remains, and the film comes close to that with the song "Khoon Phir Khoon". It is a beautiful song, evocative, but one is left to wonder if the streams of blood that are seen flowing like paint were filmed too perfectly.

The background score is exquisitely integrated into the narrative of the film, and accentuates the anxiety and horror felt by the characters. It throbs with emotion, and will move you.

While the film takes up a brave look at the crimes of war, it feels overstretched after a while. The second half could have been crisper. The actors are par excellence and that sustains the film, but the bleakness gets to you, as does the repetitiveness of the violence. 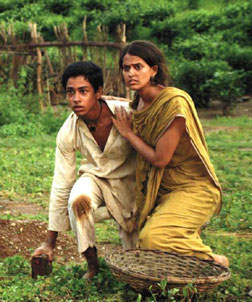