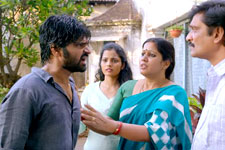 Veturi Sarma / fullhyd.com
EDITOR RATING
7.5
Performances
Script
Music/Soundtrack
Visuals
8.0
8.0
8.0
7.0
Suggestions
Can watch again
Yes
Good for kids
Yes
Good for dates
Yes
Wait to rent it
No
Venu Udugula's Needi Naadi Oke Kadha elaborately and thoroughly deconstructs virtues like kramasikshana, vinayam, vidheyata etc. and wonders if they are worth the hassles people go through to inculcate in themselves. This he does through the life of Sagar Rudraraju (Sri Vishnu), a man who just wants to be someone his father would like but doesn't know how.

An interesting choice of writing makes the father Devi Prasad (Devi Prasad) a schoolteacher, and so he gets to spout poems about putrotsaham and pithy remarks like vidya viheenaha pasuhu while, just maybe, wondering why he couldn't quite warm up to his son. The relation goes nowhere as the father and son are constantly in each other's faces as the confines of their middle class lives force them to be, and Sagar is increasingly aware that he couldn't be the man his father wants him to be.

It's not for want of trying. He befriends Dhaarmika (Sapna Titus), a girl who has all the qualities that he wants to imbue in himself, for pointers. She tells him that it's all written in books, and that he just has to follow what the positive thinking gurus of the world (Posani Krishna Murali for one) say and voila he'll be a changed man. He believes it and gets genuinely excited by just looking at the books, and even prepares a timetable to follow each of the written words like his life depended on it. His self-worth is so low that when the girl falls for him, he brushes her off saying that she is way out of his league, and focuses on his efforts to be a better man.

The script, however, never makes anything as easy for him, and he has to wade through books, well-meaning friends, a strained relationship with his father trying in vain to understand why it is the right thing to walk away smiling when someone splashes mud on his shirt when all he wants to do is hurl abuses and throw a rock at him. Nobody has any answers to that which makes him increasingly frustrated at the pointlessness of it all, and he finally leaves his family and takes off for Hyderabad.

The film does get repetitive towards the end with Sagar's repeated attempts to convince his father that not everything in life is about "settling" in it and that the word itself could have different meanings to different people, and that each person needed to be accepted for what they chose their approaches to life to be. But that can be forgiven as an outburst of earnestness from a debutant director who has otherwise come up with an important film, one that seems to say that for every Arjun Reddy, there are a thousand Sagar Rudrarajus.

The difference between Arjun Reddy and Sagar is that the latter can't hide behind brilliance and charm (he has neither) to cover up for his inadequacies. He has to face them day in and day out, and he cannot drink himself nuts to pass out and escape his reality for the day. For him each day is about trying to tell everyone that he too is a part of this world.

He is not fortunate enough to have a clearly articulated world view and self-concept. He is not a guy who sits on a high pedestal created by his writers, from where he can dole out lessons and deride people who chose to conform to the norms created by society. He tries to conform, he really does, putting in the hard yards, baring his soul for all of us to see. In the end whatever he makes of it all is his story, which is equally true for every other story in the film. Or in general. Needi naadi oke kadha.

Steering you through this saga are the performances that are inch-perfect, especially those portraying Sagar's family and the cherubic junior whom the hero is inspired by. They are not the usual sugar-coated stereotypes for the hero's families in Telugu movies, but are written to come quite close to real people you know. The actors playing the mother, sister and father deserve special mentions for the way they understand their characters and are able to commit them on to the screen.

Sri Vishnu already has a couple of films that he can look back fondly upon, and Needi Naadi Oke Katha adds to that list. He is in his element here and delivers a confident performance in an author-backed role (if you can forgive that slang in the first few minutes).

The writing, cinematography, music and editing refuse to shine by themselves, choosing instead to blend in with the story the director wants to tell. The film ends with the father trying to pen a poem for his son, but unable to find the words for it. Which is a deft touch on Venu's part, for Sagar's life is clearly no poetry. It is mundane, the life of a lout, but if that is what he wants, who are we to judge? The haunting melody that comes at the end of it all can make you sit alone for a while as the others are leaving, reflecting upon what you've seen. It is not often that a Telugu movie does that to you.

Whether through thoughtful planning or as a delightful coincidence, Needi Naadi Oke Kadha releases just as the exam fever has gripped the students. The parents would be served a timely lesson to let their kids be.
Share. Save. Connect.
Tweet
NEEDI NAADI OKE KATHA SNAPSHOT 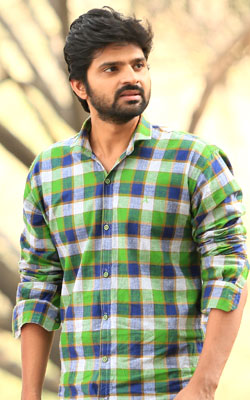 See Needi Naadi Oke Katha full details
TOP COMMENT
Josh on 28th Mar 2018, 10:49am | Permalink
"He tries to conform, he really does, putting in the hard yards, baring his soul for all of us to see. In the end whatever he makes of it all is his story, which is equally true for every other story in the film. Or in general. Needi naadi oke kadha."

Love the feeling in the writing. Good to switch sides of the fence with you, Sarma :)
4
0
NEEDI NAADI OKE KATHA USER REVIEWS
1 - 2 OF 2 COMMENTS
POSITIVE  |  NEGATIVE |  NEWEST  |  OLDEST  |  MOST HELPFUL  |  LEAST HELPFUL
The Common Movie Goer on 29th Mar 2018, 12:18am | Permalink
Didn't quite like his performance in Vunnadi Okate Zindagi, but definitely want to check this film out after this review. Great analysis, Sharma garu!
Josh on 28th Mar 2018, 10:49am | Permalink
"He tries to conform, he really does, putting in the hard yards, baring his soul for all of us to see. In the end whatever he makes of it all is his story, which is equally true for every other story in the film. Or in general. Needi naadi oke kadha."

Love the feeling in the writing. Good to switch sides of the fence with you, Sarma :)
TJ Reddy on 28th Mar 2018, 2:08pm | Permalink
Love the choices Sree Vishnu is making. A really good actor's actor in the making.
Hari on 29th Mar 2018, 2:16am | Permalink
True. Mental Madhilo and now this(haven't watched this movie yet but will be doing so soon). I also liked Sri Vishnu in Second Hand. Definitely one to watch out for.
Very good review Mr. Vetruri Sarma.

ADVERTISEMENT
This page was tagged for
needi naadi oke katha movie
telugu needi naadi oke katha movies
needi naadi oke katha full movie
story is wife breastfeeding to needi old person.
Needi Naadi Oke Katha telugu movie
Follow @fullhyderabad
Follow fullhyd.com on
About Hyderabad
The Hyderabad Community
Improve fullhyd.com
More
Our Other Local Guides
Our other sites
© Copyright 1999-2009 LRR Technologies (Hyderabad), Pvt Ltd. All rights reserved. fullhyd, fullhyderabad, Welcome To The Neighbourhood are trademarks of LRR Technologies (Hyderabad) Pvt Ltd. The textual, graphic, audio and audiovisual material in this site is protected by copyright law. You may not copy, distribute, or use this material except as necessary for your personal, non-commercial use. Any trademarks are the properties of their respective owners. More on Hyderabad, India. Jobs in Hyderabad.