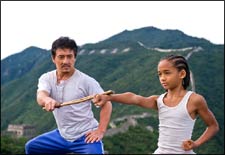 Samrat Sharma / fullhyd.com
EDITOR RATING
6.5
Performances
Script
Music/Soundtrack
Visuals
7.0
6.0
7.0
8.0
Suggestions
Can watch again
Yes
Good for kids
Yes
Good for dates
Yes
Wait for OTT
No
Talk about misleading names. The second film this week with a completely misleading title, The Karate Kid, in fact has nothing to do with karate. Centered entirely on a kid learning martial arts from a kung-fu master in China (in case you've lived under a rock all your life - "karate" is Japanese), this is as far from being Karate Kid as it gets.

Weirdly enough - they never tackle it in the film. There is no mention of karate, or a joke, or even a misguided reference from anyone that would justify the tile. It's a little disconcerting that the screen title says The Karate Kid, and nothing in the film once mentions anything about it.

That's a minor quibble however. If you're willing to forgive the film for the criminally large amount of time it spends trying to set itself up, there is a good 90-minute film hidden in those 2 hours and a bit. The location photography is frankly amazing, the fight sequences are engaging and punchy, and there are some light yet effective emotional moments as well.

Dre (Jaden Smith) is an American kid whose single mother (Taraji P Henson) takes him to Beijing where he meets an interesting girl and runs into kung-fu bullies. A local handy man (Jackie Chan), who is also a kung-fu master, takes him into his tutelage and trains him so that he can take on the bullies in a tournament. That's all you need to know, in case you missed the memo.

While the overall structure of the plot is the same as the 1984 Karate Kid, director Harald Zwart brings the film its own feel and aura and characters, choosing to only reference some parts of the earlier film. The film feels like a genuine remake, and with a completely separate set of goals than the original.

Partly because it is financed by China, and partly because it's entertainment fluff, the film never gets into any politicking, which is actually a good thing, because the time it takes to get started would have been further compounded. When you see Jaden Smith get his butt handed to him in what seems like his 5th time, you start wondering whether the actual training and fighting bits are coming at all or not..

It's fascinating in this time and age to watch a film where a couple of Americans move to China for a better life and are picked on as outsiders. Not only does it reverse the cultural politics, it makes for a true underdog story in the absence of the class divide of the 1984 film. Despite that, the preamble to the film is still too long and tedious to sit through.

Even when it gets cracking, there is no urgency to the proceedings. At times it feels right - like some of the breathtaking kung-fu training sequences, or some quieter moments of grace and beauty - but at other times you wish they'd move things along a little bit. This does make you sit up and appreciably cheer up whenever there are kids beating each other. The fight choreography is simply amazing, and you feel the quickness and lethality of the fighting styles.

There's seriousness about the proceedings, too. The film takes the kung-fu seriously, and there isn't any room for kung-fu antics. Helpful, because Jaden Smith is a null actor - if he was tasked with more involved irreverent things, I don't think I could stand it. There are points where you get why the other kids are hitting him.

On the other end is Jackie Chan. He actually gets to act this time - not just run around yelling "Cartaaah!" He has genuine emotional beats where he shows why he is the superstar he is, and makes up for the recent past.

The plot is very standard, and you see every emotional moment coming, but Chan has enough charisma to pull those off well. Ultimately the combination of Chan, some spectacular fights and a gorgeous looking film mean this is good times at the cinemas. Jaden Smith and the bloated running time try to spoil the fun, but ultimately can't.
Share. Save. Connect.
Tweet
THE KARATE KID SNAPSHOT

ADVERTISEMENT
This page was tagged for
film review of karate kid in english
summary of the karate kid in english
The Karate Kid english movie
The Karate Kid reviews
release date
Follow @fullhyderabad
Follow fullhyd.com on
About Hyderabad
The Hyderabad Community
Improve fullhyd.com
More
Our Other Local Guides
Our other sites
© Copyright 1999-2009 LRR Technologies (Hyderabad), Pvt Ltd. All rights reserved. fullhyd, fullhyderabad, Welcome To The Neighbourhood are trademarks of LRR Technologies (Hyderabad) Pvt Ltd. The textual, graphic, audio and audiovisual material in this site is protected by copyright law. You may not copy, distribute, or use this material except as necessary for your personal, non-commercial use. Any trademarks are the properties of their respective owners. More on Hyderabad, India. Jobs in Hyderabad.