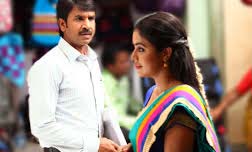 Ravi Kandala / fullhyd.com
EDITOR RATING
5.0
Performances
Script
Music/Soundtrack
Visuals
6.0
5.0
4.0
6.0
Suggestions
Can watch again
No
Good for kids
No
Good for dates
No
Wait to rent it
Yes
Whenever our comedians are cast as heroes, our directors seem to believe that the only ways to go are to portray them as full-time jokers (some movies with Kota, Brahmanandam or Ali) or turn them into complete mass heroes (all of Sunil's recent duds) without a care for how it would all be received. There is a third kind, too - of turning them into sacrificial heroes (Babai Hotel, Uncle). Srinivas Reddy, thankfully, follows a different path.

His second venture as a hero, Jayammu Nischayammu Raa has him play the role of Sarvamangalam, a young man from Karimnagar, who lands a job as a clerk in a government office in Kakinada. Sarvam, as he is called, is a blind believer in an astrologer named Pita (Jeeva). In Kakinada, Sarvam meets Rani (Poorna), a girl with a government job and a dream to start a nursery. He likes the girl, and based on Pita's advise that she would be lucky for him, decides to woo her.

Simultaneously, he is also trying for a transfer back to his village so he can take care of his aging mother. How the innocent Sarvam is manipulated by his colleagues and seniors in office, and how he manages to get rid of his blind belief in astrology and turn things around for himself and his love form the remaining part of the movie.

Jayammu Nischayammu Raa does not go the slapstick route just because it has a comedian at the helm, and decides to depend on its story instead. The story is simple enough and the director fills it with a rustic charm and characters oozing flavour. The office Sarvam works in, his colleagues, the room he lives in... everyone and everything is fleshed out in loving detail, sometimes excruciatingly so. Kakinada is shown beautifully, and the way the director shows the passage of time with the help of a poster of Attarintiki Daaredi is commendable. The comedy is also worked into the script organically, and works quite decently.

The issue, though, comes with the pacing. The movie jogs along at an agonizingly slow pace, and everything including the conclusion is a drawn-out affair. Ideally the interval point should have showcased a changed hero transformed from the timid, astrology-focused guy we see in the first half. Even the end should have been quicker - while the comedy between Praveen and the group of brahmins led by Posani is good, it just prolongs the inevitable.

The performances are fine. Srinivas Reddy acquits himself quite well, and does not attempt to beat up a thousand men. Poorna also does well, while the supporting cast of Krishna Bhagawan, the Jogi brothers, Praveen and Posani play good roles and increase the watchability.

The film is technically decent, and the cameraman does good work. There are four songs, and they mostly play out in the background.

Jayammu Nischayammu Raa has a decent story to tell and some able performances to match it, and could have been a safe bet except for the slow pace and the length. You need to decide if you are ready for a slow rustic entertainer.
Share. Save. Connect.
Tweet
JAYAMMU NISCHAYAMMU RAA SNAPSHOT 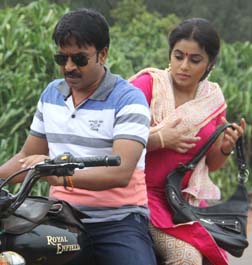 ADVERTISEMENT
This page was tagged for
Jayammu Nischayammu Raa telugu movie
Jayammu Nischayammu Raa reviews
release date
Srinivas Reddy, Poorna
theatres list
Follow @fullhyderabad
Follow fullhyd.com on
About Hyderabad
The Hyderabad Community
Improve fullhyd.com
More
Our Other Local Guides
Our other sites
© Copyright 1999-2009 LRR Technologies (Hyderabad), Pvt Ltd. All rights reserved. fullhyd, fullhyderabad, Welcome To The Neighbourhood are trademarks of LRR Technologies (Hyderabad) Pvt Ltd. The textual, graphic, audio and audiovisual material in this site is protected by copyright law. You may not copy, distribute, or use this material except as necessary for your personal, non-commercial use. Any trademarks are the properties of their respective owners. More on Hyderabad, India. Jobs in Hyderabad.