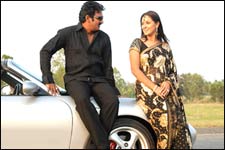 Krishna KBS / fullhyd.com
EDITOR RATING
3.0
Performances
Script
Music/Soundtrack
Visuals
NA
NA
NA
NA
Suggestions
Can watch again
NA
Good for kids
NA
Good for dates
NA
Wait to rent it
NA
The law of chaos states that expectation and end-result are inversely proportional. This was never truer than in the case of John Apparao 40+. If you go without any expectations, you might even like the film. Probably, just probably, this might be the reason the second half seems as dull as ditchwater, as we build up our hopes based on the first half.

There have been quite a few films in the past that dealt with aged bachelors and old virgins - with 40-Year-Old Virgin coming immediately to mind. Even in Telugu, every now and then there is a new release with a geriatric bachelor (and a possible virgin) in it; though the main difference between those movies and John Apparao 40+ is that the later movie doesn't try to be coy about this fact, and the hero plays his age.

Actually, the film doesn't try to be coy about anything, whether it be body fluids or doubts regarding the potency and orientation of the protagonist. In fact, toilet humor abounds. And if the audience lap it up as they did Bachelors and College and 6 Teens, it might even turn out to be a profitable proposition.

However, for that to happen, the audience should walk out of the theater at the interval, as, rather inconceivably, the director jumps to the conclusion midway that ennui is better than sleazy innuendoes, and puts this theory into practice in the second half.

As for the story, it's a thriller in the guise of a comedy. Or did we mean it the other way round? Anyway, Apparao (Krishna Bhagwan) is a genial fashion designer, who isn't married - yet. You might say that's no big deal, but not him. Marriage is the be-all and end-all of his life, and he has been waiting for the day when he gets to tie the knot for the past 40 years and more.

Realizing that left to himself and his helpful friends (Jeeva, Melkote, Rajesh), he will never succeed in his ambitions - and worse, the movie wouldn't get a move on - fate sends Pravallika (Simran), a reporter, to him. Apparao, not amongst the best at English, assumes that she wants to marry him when she suggests that she would love to be his sleeping partner in business. He jumps at the offer, and leaves with her. And it's the beginning of a complete twist in the tale.

Unfortunately, proceedings also come to a grinding halt. Indeed, you feel that you are watching an altogether different flick in the second half. This is not helped by the fact that most of the cast that enlivened the first half (Jeeva, Melkote, Rajesh) is completely missing. Thankfully other comedians (Ali, Raghu Babu) walk in, and needless to say do a fairly decent job of mouthing some inane and occasionally funny one-liners, destressing you in the tedium.

Simran makes a comeback (if you excuse Okka Magadu, literally), and though she looks older, she looks as alluring as she has ever been. Her acting doesn't seem to have suffered due to the break either. Krishna Bhagwan excels in the first half as the self-deprecating 40-year-old, but doesn't look anything like what he portrays in the second. In fact, he looks like he has walked out of a '50s movie, wearing false beards and making faces, and striving in vain to look original.

However, the music director doesn't make any such mistake, as he chooses wisely to just remix oldies - which, thankfully, work. Watching Krishna Bhagwan imitate Bala Krishna's walking style in these dances only adds to the pleasure.

But the movie fails to impress overall, in spite of the slick graphics and intriguing plot, due to a numbing second half, and the fact that the director seems to be hampered by budget constraints as the use of a handycam to shoot certain scenes reveals (which also results in a mishmash feel to the film).

However, you might still enjoy the flick if you love sleazy humor and remember to walk out of the theater at the end of the first half - and if you don't, you can still enjoy sleeping in the AC.
Share. Save. Connect.
Tweet
JOHN APPARAO 40+ SNAPSHOT

RATING
10
Saradhi on 23rd Mar 2008, 7:44pm | Permalink
Oh! Come on friends! Stop criticizing the reviewers for their reviews. After all, they are human beings and have their own styles. Look in to the matter what they write and you give your opinion on the standard of the movie. This column is meant for that. The movie is not so bad. an average one. May not be a great comedy flick, but you can enjoy some. Encourage the reviewer to improve his writing skills but please donot over criticize.

ADVERTISEMENT
This page was tagged for
jahnapparao40+ telugu full movie
Telugu apparao 40+ songs
John Apparao 40+ telugu movie
John Apparao 40+ reviews
release date
Follow @fullhyderabad
Follow fullhyd.com on
About Hyderabad
The Hyderabad Community
Improve fullhyd.com
More
Our Other Local Guides
Our other sites
© Copyright 1999-2009 LRR Technologies (Hyderabad), Pvt Ltd. All rights reserved. fullhyd, fullhyderabad, Welcome To The Neighbourhood are trademarks of LRR Technologies (Hyderabad) Pvt Ltd. The textual, graphic, audio and audiovisual material in this site is protected by copyright law. You may not copy, distribute, or use this material except as necessary for your personal, non-commercial use. Any trademarks are the properties of their respective owners. More on Hyderabad, India. Jobs in Hyderabad.