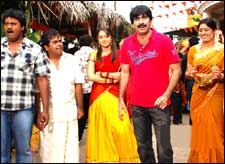 EDITOR RATING
7.0
Performances
Script
Music/Soundtrack
Visuals
NA
NA
NA
NA
Suggestions
Can watch again
NA
Good for kids
NA
Good for dates
NA
Wait for OTT
NA
In many ways, Ravi Teja is one the very few actual entertainers on Telugu screens. Fantastic comic timing and dialogue delivery and a full range of emoting prowess are only one side of the story. Given the lack of any superstar image or rabid fans who base their personal reputation on the success of each new release of his, he is much more free to do just what he wants, and the result is almost always good news for all those of us who just want 2 hours of clean fun.

Krishna is the quintessential Ravi Teja comedy - the entire gang is there, the comic sequences are full paisa-vasool, and the dialogues rock. If it were not for an overdose of violence in the second half, this would have been in the Nuvvu Naaku Nachchaav league. And yes, if you are still not a fan, it will make you one.

Krishna (Ravi Teja) spots Sandhya (Trisha) in the Vijayawada Kanakadurga temple, and decides that she'd be quite lucky to marry him. Unfortunately women have minds of their own, and she takes a pretty dim view of his advances.

Never one to take anyone else's opinion seriously, Krishna persists, and even moves into a portion in her house with his brother (Chandramohan) and sister-in-law (Sudha), after getting incumbent Venu (Venu Madhav) to vacate through a mixture of several acts we shouldn't really discuss in a public forum. He also discovers that the owner Bobby (Brahmanandam), Sandhya's uncle who she is staying with, has an extra-marital affair with his servant maid, and thoroughly exploits this to get access to Sandhya.

Sandhya however has a flashback - she is being hounded by Jakka (Mukul Dev), a seriously evil villian who wants to marry her, and Krishna has to take him on. Krishna, of course, has no problem taking anyone on anywhere, as long as you don't expect him to be polite, or, worse, quiet. The second half then sees the movie swerve from the path of light-heartedness and into violence. The climax is as moronically grandiose as any you find in movies of leading stars.

Krishna has a pretty hilarious first half, with the path being led by Mr. Motor Mouth himself, who finds more things to say in any situation than any other living man. Fortunately Brahmanandam too has a full-bodied role that lasts right through the movie, and excels as the poor man who has to pay a huge price for having an illicit affair.

Venu Madhav in a brief role elicits the mandatory guffaws, but Trisha, with a flair for comedy herself, has nothing much to do in the film. The music features mostly average tracks, with the songs being more of speedbrakers than entertainers. However, the picturization makes them look grand.

Tollywood directors' fixation for grand and violent climaxes has always been the bane to the repeat value of even good films, and Krishna is no exception - tension and gore in the second half spoil the bohemian feel created by the first. However, this one is better than just about everything else screening in Telugu at the moment, and is a vital recommendation for a healthy life.
Share. Save. Connect.
Tweet
KRISHNA SNAPSHOT

See Krishna full details
KRISHNA USER REVIEWS
1 - 15 OF 15 COMMENTS
POSITIVE  |  NEGATIVE |  NEWEST  |  OLDEST  |  MOST HELPFUL  |  LEAST HELPFUL
USER RATING
7.3
129 USERS
Performances
Script
Music/Soundtrack
Visuals
5.3
4.0
3.3
5.0
Can watch again - No
Good for kids - No
Good for dates - No
Wait for OTT - No
Ravi U on 24th Apr 2008, 11:28pm | Permalink
movies need not to enlighten or educate public but i'm happy if they don't degrade the people. oka dialogue untundi 'rowdyism puttinde vijayawada loa' ani.. aa okka dialogue chaalu idi enta chetta cinemanoa cheppadaaniki.. i think the movie ran to that extent only on the shoulders of Dr.Brahmanandam..
RATING
2
Movie Lover on 15th Feb 2008, 6:01am | Permalink
em bakwaj cinema ra bhai..ee fullhyd gaadini dimak dobbonidemo,intha chetta cinemaku *** ichindu..ee movie * chaala ekkuva..stay away from this crap guys..
RATING
2
General on 10th Feb 2008, 6:57pm | Permalink
Pratap, you better to stop watching telugu movies.
RATING
6
Raja Kumar on 5th Feb 2008, 5:44pm | Permalink
good movie
v.v.vinayak direction very good
RATING
6
Pratap on 4th Feb 2008, 10:44am | Permalink
I completely agree with every point of mr. Veg Manjuria [who posted a commented]... The movie is a complete BS with vulgar comedy and lots of Teen Maar Music and background... The reviewer would have been drunk while watching the movie and sleeping while reviewing it :)... sooo sadd.... The first half is at least bearable... second half is is just illogical and stupid and worst... hero coming out of a closed pit... and lorries being blasted all around and 500 odd sumos... Wow!! the telugu audience dont seem to have a head at all :))... anyway... kudos to the reviewer for writing BS in the name of review and making me see this dumbest movie of this year. It is better Chakri (music director) takes some rest... passing off Teen maar and the sounds of dropping vessels as music might sound as music only to his ears... Background score was pathetic and dialogues were crappy (s****y to put it that way)... Comedy was boring and and Ravi Teja clearly lacked energy... Only saving point might be Trisha in songs... but music being pathetic, seeing her shaking for such stupid tunes puts you off... I still did not understand why they required such flamboyant sets and locations to shoot such stupid songs which are ideally played for jaataras.
RATING
2
CS on 24th Jan 2008, 11:19am | Permalink
Politically incorrect?
* Asaly Rowdyism puttindi Vijayawada lo
* Idemanna Kashmir border-a kaapadukoleka-povadaniki?

RATING
4
Abhi on 22nd Jan 2008, 4:22pm | Permalink
what the hell is wrong with full hyd????its such a crap movie and u gave it a rating 3!!!!!!then what was really wrong with taare zameen par.....guys i seriously advice u not to watch this crap and from now onwards dont believe with full hyd reviews too!!!its a serious suggestion........
RATING
2
Veg Manjuria on 20th Jan 2008, 5:44pm | Permalink
Krishna was a major disappointment on various counts. First, the hero falling for the wet wet wet girl concept is as old as Raviteja himself. It wud be okay if some teenager hero did so at the height of his hormonal rush. But a 30plus muduru doing it so duhhh.
*THere is no basis for making Vijayawada as the base for the movie. Just one of those ploys to get that market, maybe.
*How suddenly someone named Shinde (a Maharastrian name) is not explained.
*Brahmanandam falling for a buxom lady shows poor taste. Very very cheap. The antics are hardly comic. If you think watching a fat woman being groped all over by an equally repulsive looking man is fun, then probably we can't help you.
* There is not a single memorable line, dialogue or episode that stys with you after the scene is gone.
* The music is loud and the sets are completely out of place. Why shd they have a Bangkok or Dubai or whatever place that is.. for a Andhraishq song of Osi nee soku...
*And those garish sets for the other songs makes no sense.. How then did Krishna make it to the best ten of Fullhyd.. is full of surprise to me.. I rest my case

ADVERTISEMENT
This page was tagged for
don movies cnama
Krishna telugu movie
Krishna reviews
release date
Ravi Teja, Trisha
Follow @fullhyderabad
Follow fullhyd.com on
About Hyderabad
The Hyderabad Community
Improve fullhyd.com
More
Our Other Local Guides
Our other sites
© Copyright 1999-2009 LRR Technologies (Hyderabad), Pvt Ltd. All rights reserved. fullhyd, fullhyderabad, Welcome To The Neighbourhood are trademarks of LRR Technologies (Hyderabad) Pvt Ltd. The textual, graphic, audio and audiovisual material in this site is protected by copyright law. You may not copy, distribute, or use this material except as necessary for your personal, non-commercial use. Any trademarks are the properties of their respective owners. More on Hyderabad, India. Jobs in Hyderabad.