U Me Aur Hum Review 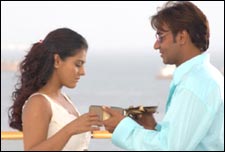 Samrat Sharma / fullhyd.com
EDITOR RATING
6.0
Performances
Script
Music/Soundtrack
Visuals
NA
NA
NA
NA
Suggestions
Can watch again
NA
Good for kids
NA
Good for dates
NA
Wait to rent it
NA
Wow, I had this insanely bizarre day today. First, I have to skip lunch to finish work and then hitch an auto in the heat to the cinema hall. The movie begins late because the previous show, Bhale Dongalu, doesn't end in time. Which means the projectionist starts U, Me Aur Hum immediately after, and there is a small stampede reaching the seats, during which I hurt my elbow a little. Then the seats are in the corner, so my viewing angle isn't that great...

Are you bored yet? Because if not, I highly recommend you go watch Ajay Devgan's directorial debut. But if you were even half as bored with the soliloquy as I was writing it, you will understand my pain. For the film, as good as it could have been, is weighed down by the endless soliloquies and the boring banter between people. No, it's not a talky-talky movie like Before Sunset. It's just very painfully paced.

Devgan's understanding of pacing and structure is raw yet, and that makes a film that could have been enjoyable, suffer. The first half in its entirety is an implausible and completely routine courtship. Ajay (Devgan) falls in love (no, really) with a waitress on a cruise the moment he lays eyes on her. Piya (Kajol), the girl in question, detests the advances of a drunk dude, but falls for him after he reads her diary and says all the right things.

Predictably enough, she leaves him when he confesses, but comes back in an inspired bit of narrative flip-flop. They get married, and then the trouble begins. This, and the shenanigans of their friends, the married and bickering Nikhil and Reena (Raghavan and Dutta), and the unmarried happy couple Vicky and Natasha (Khanna and Sharwani), take up the entire first half. It is slow, meandering, and entirely too self-obsessed to notice, but the film takes a solid hour and a half to get to the point.

The point then, is this - Piya has Alzheimer's. She forgets things routinely, and alarmingly, and their love and marriage must go through her sickness and emerge victorious. Smartly enough, the film is not about Alzheimer's and how horrible the disease (and the plight of the people suffering from it) is. The disease is just a peg on which Devgan hangs his love story, one that spans diverse emotions and character journeys.

This is also the strongest part of the film: the second half, despite some hiccups, works very well. The emotional journey and the cycle of horror, shame, guilt and redemption that Ajay goes through while his wife tries hard to cope is brilliantly executed. Devgan has a sure hand while directing underplayed emotional frustrations, and the cast supports him ably. The friends-as-family urban truth is visited often, and used very well in a film that uses its topicality to its hilt.

Devgan's directorial skills have a long way to go yet, however. The scenes are all shot with a whole lot of screen-time wasted. Frugality is something the man must learn lest he fall into Gowariker territory. He enters a scene way too early and leaves too late, with many pauses in between. It's not a lingering film like a Terence Malick project; instead, the beats serve as time-holes in the script, giving time to your audience to break from the suspension of disbelief.

While on the topic, the script is absolutely balderdash. Don't get me wrong - despite the shades of 50 First Dates and Away From Her in the script, the script rises above that to be an original effort. I am thinking the non-original bits come from Robin Bhatt, one of the three writers credited with the film. What the script lacks is strong dialog to keep the film flowing. The shayari-afflicted writing is painful to hear in the first half, and meanders with no end in sight in the second.

What keeps the film afloat during those groan-inflicting scenes is Kajol. The actress shows why she is still the top cat around these parts, handling her role with nuances not yet seen from her. The first half is a breezy romance, something she has down pat, so the smile returns and we are all happy. It is in the second half that she pushes the limits of her range and plays someone losing her memory and her mind with surprising pathos and understatement.

This is Devgan's strength as a director, too, as he draws a uniform and restrained performance from the rest of the cast to support Kajol's crackerjack stuff. What Devgan lacks in pacing and consistency, he makes up for in emotional depth and communication. Despite mainstream accoutrements like - heavens save us - a shaadi song, the film comes across as a sincere effort from him. Too bad it's not as strong last year's directorial debut from an actor.

U, Me Aur Hum is far from perfect, yet flawed as it is, I can recommend this to anyone who can sit through some painful dialog and a truly inconsequential first half. Before you venture out to see it, however, remember to stock up on water. Expect to gag a lot.
Share. Save. Connect.
Tweet
U ME AUR HUM SNAPSHOT

See U Me Aur Hum full details
U ME AUR HUM USER REVIEWS
1 - 8 OF 8 COMMENTS
POSITIVE  |  NEGATIVE |  NEWEST  |  OLDEST  |  MOST HELPFUL  |  LEAST HELPFUL
USER RATING
4.7
16 USERS
Performances
Script
Music/Soundtrack
Visuals
3.7
4.0
3.0
4.0
Can watch again - Yes
Good for kids - Yes
Good for dates - Yes
Wait to rent it - No
shades of grey on 6th Jul 2008, 5:50pm | Permalink
I just watched this film and I have to say I was completely bored by the first half of it. I can’t make comparisons with ‘The Notebook’ as I haven’t had the time to see it yet. I wouldn’t be surprised however, if U Me Aur Hum was a blatant copy of it. The first half of the film was so clichéd and uninteresting for me. There were very few scenes in the second half of the film of which I found mildly appealing. But the whole film just dragged! I found myself daydreaming throughout a lot of it. I guess it’s just harder for Hindi films to capture my attention. I don’t even want to talk about Tamil films… (they’re a whole different story)…
Araj on 5th Jul 2008, 12:50am | Permalink
hellooooo
Araj on 5th Jul 2008, 12:29am | Permalink
@tsk_tsk:
Krishna on 20th Apr 2008, 9:53pm | Permalink
I liked this film. My wife simply LOVED it and wants to watch it again. Hey Tsk Tsk, your comments were pretty cool :-)

RATING
6
Tsk Tsk on 15th Apr 2008, 5:37pm | Permalink
@Die Hard-5: The Notebook itself is a copy - of the book. Like Motorcycle Diaries was - of the book (referring to your comments on Gamyam). The point being - all "plagiarism" is not evil. It occasionally adds to extend the beauty of the original to a wider audience.

As an aside, your comments about Hollywood filmmakers being

ADVERTISEMENT
This page was tagged for
U Me Aur Hum hindi movie
U Me Aur Hum reviews
release date
Ajay Devgan, Kajol
theatres list
Follow @fullhyderabad
Follow fullhyd.com on
About Hyderabad
The Hyderabad Community
Improve fullhyd.com
More
Our Other Local Guides
Our other sites
© Copyright 1999-2009 LRR Technologies (Hyderabad), Pvt Ltd. All rights reserved. fullhyd, fullhyderabad, Welcome To The Neighbourhood are trademarks of LRR Technologies (Hyderabad) Pvt Ltd. The textual, graphic, audio and audiovisual material in this site is protected by copyright law. You may not copy, distribute, or use this material except as necessary for your personal, non-commercial use. Any trademarks are the properties of their respective owners. More on Hyderabad, India. Jobs in Hyderabad.