Terror In The Deep Review 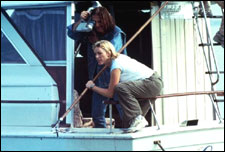 Anand Shankar / fullhyd.com
EDITOR RATING
2.0
Performances
Script
Music/Soundtrack
Visuals
NA
NA
NA
NA
Suggestions
Can watch again
NA
Good for kids
NA
Good for dates
NA
Wait to rent it
NA
First, the film is not actually Return In The Deep. The actual name is Shark Attack 3: Megalodon, which is a straight-to-DVD film also shown as a TV movie in Australia. Second, this is not a film. It is a plagiarized, schlocky attempt at schlock, with gratuitous blood, nudity, cursing, and headaches - the last one being yours.

A 2002 film (okay, not really a film) released just to bide the time till Tashan hits the theatres, with a cast of mostly Slavic extras, a small-time TV actor as the lead, and a barely-there actress famous for baring all in extremely low budget movies may sound like good times for someone prepared to see a so-bad-it's-good film.

There's also the concept: a shark the size of a multiplex, eating people and boats. That's good times, too. But you cannot begin to imagine how awful this is. Stock footage from Discovery channel is blatantly stolen, the fishes removed with Adobe After Effects and little boats with people on them added.

Then there is the writing. Of course, you expect a Z-grader like this to have completely atrocious dialog, but never do you expect, after a long tense scene, a man ask, very casually, "How about I take you home and eat your !^$$y?".

Now I like movies with man-eating sharks. There haven't been very many good ones, but I'll take what I can get, hence my 8 viewings, and counting, of Deep Blue Sea. This, though, tests the patience even of dedicated creature movie fanatics.

The shark moments itself are only a handful, and every time, I kid you not, every time the same stock footage of a shark leaping upwards is used, with hilarious results. This movie is choc-a-bloc full of extremely bad acting, terrible action and the worst effects you have seen since the 1970s.

I haven't seen Shark Attack 1 or 2, though I assume there are complex character problems and existential debates raging on in those movies that are somehow being offered closure here. Because I see no other reason for the zero coherence in what is happening on screen.

Of course, it goes without saying that something this awful will have no technical ground to tread at all. Despite being the sort of film that lends itself to technical wizardry, this film (okay, not really a film) has the worst crimes in movie history on screen. Drug-induced editing, cutting artifacts, jumps between different film stock, and the absolute worst cacophony to pass for background music.

This is the sort of thing that would play on a cheap movie channel at 3 in the morning. You don't put money down to go watch it - which is what is happening with the theater I watched it in. There were a total of 17 people watching it in the entire hall, most I fear being the sort who did their business with the nudity and then fled before the awful sharks came.

I suppose they should count their blessings. As should you, because in the off-chance that you would want to watch this, you have a harrowed reviewer's word to save you.
Share. Save. Connect.
Tweet
TERROR IN THE DEEP SNAPSHOT

ADVERTISEMENT
This page was tagged for
terror inthe deep cast
terror in the deep movie rating
Terror from the Deep Movies
terror from the deep full movie
terror in the deep full movie hd
Follow @fullhyderabad
Follow fullhyd.com on
About Hyderabad
The Hyderabad Community
Improve fullhyd.com
More
Our Other Local Guides
Our other sites
© Copyright 1999-2009 LRR Technologies (Hyderabad), Pvt Ltd. All rights reserved. fullhyd, fullhyderabad, Welcome To The Neighbourhood are trademarks of LRR Technologies (Hyderabad) Pvt Ltd. The textual, graphic, audio and audiovisual material in this site is protected by copyright law. You may not copy, distribute, or use this material except as necessary for your personal, non-commercial use. Any trademarks are the properties of their respective owners. More on Hyderabad, India. Jobs in Hyderabad.