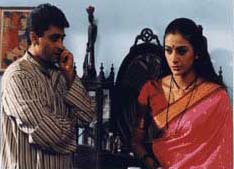 Pratima Agnihotri / fullhyd.com
EDITOR RATING
8.0
Performances
Script
Music/Soundtrack
Visuals
NA
NA
NA
NA
Suggestions
Can watch again
NA
Good for kids
NA
Good for dates
NA
Wait for OTT
NA
How is a home made? Does it have to be through the patience and tolerance of the woman of the family forced to give up her avocation since the husband does not like it? She neither harasses nor ill-treats anyone - in fact, within the four walls of the home, hers is the silenced harassment and the constant, though not conscious, and therefore more cruel, ill treatment. Is it only through the quiet endurance of this that she can be an ideal wife? Does her very existence crumble like a pack of cards if the lord and master cannot forgive her that one moment of weakness?

Such very pertinent issues which have been haunting womanhood from the days of Ahilya and Sita are re-addressed very sensitively in "Astitva", another feather in the Manjrekar cap. The film opens up very many feminist issues, but never is there an attempt to assert any issue loudly and aggressively. The debate comes alive through a real experience.

Shrikant Pandit (Sachin Khedekar) is a successful entrepreneur. On the home front he is equally lucky. His wife Aditi (Tabu) adores him and lovingly tolerates all his tantrums despite his having very little time for her, and his adultery. Aniket, the son, looks up to his father, too.

One fine afternoon, during a lunch that he hosts to introduce Revati (Namrata Shirodkar), the future daughter-in-law, to Ravi, his buddy of a lifetime, Aditi gets a letter which declares that Malhar (Mohnish Behl), Aditi's music teacher long back, will make her the sole owner of his entire wealth.

The hangover past, bells start ringing Shrikant's memory. He goes back to the diaries that he's meticulously written. The seed of suspicion is sown, and he confronts Aditi. And she owns up to his accusation, and confesses about how, on a rainy night ages back when Shrikant was away, she committed a sin with Malhar. Instead of consoling the woman who is shattered enough to have to confess to such a thing, he slaps her hard.

The next day there's a trial during which, despite protests from Ravi and his wife, who too had tolerated an MCP before finding a soul mate in Ravi, Shrikant makes Aditi tell everybody how she dishonored his faith. Aniket too, on knowing the truth, considers his mother a "bloody bitch". Where does Aditi go from here?

An unforgiving Shrikant wants her to stay back to guard his secret from the prying world. Then Revati refuses to marry Aniket, and all hell is let loose. But what about the shattered dreams of Aditi whose big fault was her honesty? Neither the husband who she kept loving despite his ambitious workaholism, his dalliances with other women and his inability to father a child, nor the son, are ready to accept her. For them, she is like every other thing in the home for which she cares. The solution to her dilemma is her modern bahu who understands her plight and decides to stand by her.

It is the unusual story that makes this bold film a unique analysis of the marital relationship. Manjrekar's critique of the selfish system that reduces a woman to a mere giver is quite understated. But his film as usual raises very important issues. Tabu's performance, sure to fetch her a National Award or two, adds to the poignancy of a woman's search for a self which was hidden under a defining relationship which deserts her due to her honesty.

Equally impressive is Sachin Khedekar who convincingly portrays the husband who takes his wife for granted and never bothers to look into his heart. Namrata acts out her small role of a modern girl passionate about her ability to prove her excellence in her chosen field, who can understand and empathize with the pain of the older woman.

The narration is an unusual take-off on the beaten track of the flashback technique. The director is ably helped by the music that defines the shifting relationships. With clear shades of a three-act play, the film is worth a watch because, in our days of designer babies, it addresses a mindset that needs the real change.
Share. Save. Connect.
Tweet
ASTITVA SNAPSHOT

ADVERTISEMENT
This page was tagged for
astitea movie full in hindi downtown
hind movie old Astitva
astitva full movie
astitva review
astitva hindi movie
Follow @fullhyderabad
Follow fullhyd.com on
About Hyderabad
The Hyderabad Community
Improve fullhyd.com
More
Our Other Local Guides
Our other sites
© Copyright 1999-2009 LRR Technologies (Hyderabad), Pvt Ltd. All rights reserved. fullhyd, fullhyderabad, Welcome To The Neighbourhood are trademarks of LRR Technologies (Hyderabad) Pvt Ltd. The textual, graphic, audio and audiovisual material in this site is protected by copyright law. You may not copy, distribute, or use this material except as necessary for your personal, non-commercial use. Any trademarks are the properties of their respective owners. More on Hyderabad, India. Jobs in Hyderabad.