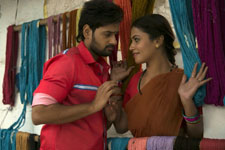 Swaroop Thotada / fullhyd.com
EDITOR RATING
5.5
Performances
Script
Music/Soundtrack
Visuals
6.5
3.0
7.5
7.5
Suggestions
Can watch again
No
Good for kids
Yes
Good for dates
Yes
Wait for OTT
Yes
Vamsi's fascination with the Godavari blessed his films and his audiences with spell-binding visuals of the shimmery, soothing river. His cinematographers have been successful in translating his lifeless muse to effusive imagery that floods the screen with gorgeous.

This latest offering of his is no exception, as Nagesh's camera captures the nightly elegance of the statesque watery expanse in chrysanthemum blue, the sunrises and sunsets in golden yellow, and the regular day-shots in humble real-life colors. It's brilliant how the same river is portrayed as an exotic background for the songs and as just a sedated presence when the drama takes centrestage. Nagesh also does a great job in knitting together the Konaseema villages and their trademark sightings like the palm-leaf huts, the fishing boats, the canals that run parallel to the cement roads and the omnipresent coconut trees.

It is also well-known that Vamsi's affinity for the Godavari is not limited to its visual splendour but extends to the peculiar simplicity of the people that inhabit the villages surrounding the river. His take on this milieu had the Konaseema dialect, and the quirky characters and their exaggerated idiosyncrasies as the staple, and that worked big time in his '90s hits. However he pretends as if this region is somehow still immune to the current internet revolution, Facebook and the affordable prices of smartphones, and his Konaseema still resembles the imbecilic setting seen in his early films, and that doesn't quite work out. Comparably Uyyala Jampala did a better job in creating the modern day Konaseema on screen.

Gopalam (Sumanth Ashwin) is a ladies tailor in a remote village in Konaseema, but he prefers to be called as a Fashion Designer. He lives with his tippler uncle Paparao (Krishna Bhagawan) and dreams of setting up a shop in the nearby village, and needs some money. Meanwhile a Malayali palm reader tells Gopalam that he has a "Manmadha Rekha" on his palm, which means he can back himself to woo any and every girl in town. Being the lazy, selfish manipulator he is, Gopalam figures out that he is only one rich girl away from his dreams, and his hunt for a rich village belle begins.

This skirt-chasing brings him to Gedela Rani (Manasa), Ammulu (Manali Rathod) who is the daughter-in-law of the local village godfather Gavarraju, and Maha Lakshmi (Anisha Ambrose). Having newly discovered his gift, he religiously follows the Ten Commandments from the philanderer's Bible, the first of which is being stupidly greedy. So he ropes in all three of them at the same time and eventually gets cooked. However, all this hell-bent desperation is not to just bed them but to wed them, and this lends the story and the character all the innocence it does.

Vamsi's story has nothing new to offer, and sadly so neither has his presentation. You don't have to be a Jewish prophet to predict the climax, right during the first song. Vamsi takes this predictable stale plot and layers it with humour, but the archaic jokes just feel that. Sumanth Ashwin makes an honest attempt but he is far from suitable for this role. All the silk on his shirt and his fake Godavari dialect can't conceal his urban upbringing. Also, he doesn't invent any style to his character and chooses to mould into the writing, and that is a problem because Vamsi's characters are just caricatures. Vamsi initially tried to rope in Raj Tarun for this role, and sure enough, the film looks like it was written for him.

The movie gets unintentionally hilarious when it goes too old-school like the scene where Gopalam teaches Maha Lakshmi how to wear a saree, by actually dressing her up himself. There is the mandatory kuchchillu bit where the camera cuts to the actress' face and she goes overboard as if she has had an orgasm. As if that's not enough, later they cross a canal on a wooden log and she gives a similar expression when their feet touch. This doesn't look like a tongue-in-cheek throwback, and you laugh for the wrong reasons. We almost expect a flowers-touching-suggesting-liplock bit later.

Manisharma's songs and background score remind you of what you have been missing all these years. It has been such a long time since we witnessed a soulful background score in a Telugu film after Manam. The songs coupled with the scenic locales give you an experience that you can cherish even after leaving the theatre. There is one particular song where mundane everyday strains like a train's whistle and an elevator's "Please close the door" recording are incorporated into the duet, and it is amusing. However, you wish all these stunts had integrated into the viewing experience rather than stood out as set pieces.

Fashion Designer s/o Ladies Tailor doesn't benefit either Sumanth Ashwin or Vamsi, and will go down in the director's list as one of his failed attempts to rejuvenate his glory. Perhaps he should not rehash his old works and reinvent himself, or at least bring himself to speed with the current world and its trends.
Share. Save. Connect.
Tweet
FASHION DESIGNER S/O LADIES... SNAPSHOT
FASHION DESIGNER S/O LADIES TAILOR SNAPSHOT 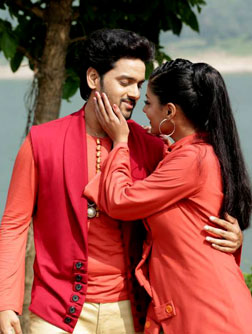 ADVERTISEMENT
This page was tagged for
ladies tailor 2 movies
ladies tailor sumnth swim movie
Fashion Designer s/o Ladies Tailor telugu movie
Fashion Designer s/o Ladies Tailor reviews
release date
Follow @fullhyderabad
Follow fullhyd.com on
About Hyderabad
The Hyderabad Community
Improve fullhyd.com
More
Our Other Local Guides
Our other sites
© Copyright 1999-2009 LRR Technologies (Hyderabad), Pvt Ltd. All rights reserved. fullhyd, fullhyderabad, Welcome To The Neighbourhood are trademarks of LRR Technologies (Hyderabad) Pvt Ltd. The textual, graphic, audio and audiovisual material in this site is protected by copyright law. You may not copy, distribute, or use this material except as necessary for your personal, non-commercial use. Any trademarks are the properties of their respective owners. More on Hyderabad, India. Jobs in Hyderabad.