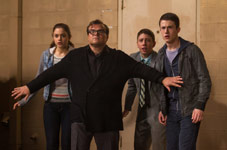 Josh / fullhyd.com
EDITOR RATING
7.0
Performances
Script
Music/Soundtrack
Visuals
6.0
7.0
7.0
8.0
Suggestions
Can watch again
Yes
Good for kids
Yes
Good for dates
Yes
Wait to rent it
No
Zach (Dylan Minnette) has to move to Madison, Delaware, upon the insistence of his mother (Amy Ryan) as they both require a change of environment to get over Zach's father's death. Brought up in New York, Zach isn't particularly kicked about having to live a silent and boring life in the suburbs. To make matters worse for him, there is Aunt Lorraine (a very good Jillian Bell) who is conveniently oblivious to how unwelcome she is.

But Zach has a pretty neighbour Hannah (Odeya Rush) who sneaks out after dark and, on one lovely night, whisks him away for a small adventure in the woods. In an effort to save her from her father Mr. Shivers (Jack Black), he along with a goofy friend Champ (short for Champion - yes that's his name, and he's played nicely by Ryan Lee) breaks into his neighbours' and stumble into a whole bunch of manuscripts of the Goosebumps series. And they are all locked.

Curiosity killed the cat, they say. Here, the kids bargain for a lot more than just a cat when they unlock the manuscript of "The Abominable Snowman Of Pasadena" and unwittingly unleash the titular character of the book into real life. The snowman literally leaps out of the manuscript, and soon it's revealed that Mr. Shivers is actually R L Stine, the author of the best-selling series, and his characters come to life when the manuscripts are unlocked.

The most sinister one, Slappy, the talking dummy, gets loose in the ruckus caused by the snowman, and chooses to act on the grudge he exercised over Stine for keeping him locked in the books for years together. Monster after monster he unleashes, and they all terrorise Madison. And now it's for Stine and the three kids to save the town.

This premise makes for giddy amounts of meta-fiction, and the writers do make good attempts at it. But at the heart of it, it is just another of those monsters-invade-heroes-save template story. When the novelty wears out, you just see one set-piece after the other with chases and ploys, and one with a dysfunctional theme park. The lucky bit is it doesn't get mind-numbingly boring - the movie manages to retain your interest till the very end.

The lead pair Zach and Hannah do some passable work with the acting. But it is Jack Black who matters, and he absolutely walks away with the film. Not just for his role as R L Stine but also for his voice-acting for Slappy. Slappy comes off as hair-raisingly eerie, and that is thanks to some great work by the cinematographer (Javier Aguirresarobe) and fantastic dubbing by Black. Among the rest of the cast, Ryan Lee and Amy Ryan make their quirky characters work.

As far as the monsters are concerned, fans of the original series have a lot to relish. There is a spectacular sequence with the gnomes out to fry Stine in a flaming oven. There is yet another one with a werewolf sniffing out Stine and the kids in a supermarket. And every scene with Slappy is terrific. These scenes with the individual monsters have a nice tautness to them, but the tension dulls when all the monsters come together.

Goosebumps is aimed at the teenage audience and is sufficiently entertaining for any adults who might want to tag along. The makers do not try to do anything beyond the call of duty - which is to thrill, scare, and entertain - and that is just as well. You have an actually good teen film to walk into with your family.
Share. Save. Connect.
Tweet
GOOSEBUMPS (3D) SNAPSHOT 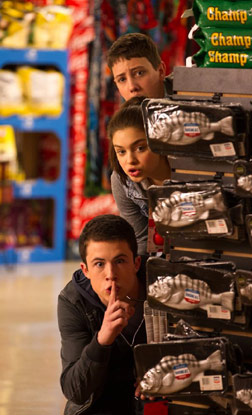 ADVERTISEMENT
This page was tagged for
Goosebumps (3D) english movie
Goosebumps (3D) reviews
release date
Jack Black, Dylan Minnette
theatres list
Follow @fullhyderabad
Follow fullhyd.com on
About Hyderabad
The Hyderabad Community
Improve fullhyd.com
More
Our Other Local Guides
Our other sites
© Copyright 1999-2009 LRR Technologies (Hyderabad), Pvt Ltd. All rights reserved. fullhyd, fullhyderabad, Welcome To The Neighbourhood are trademarks of LRR Technologies (Hyderabad) Pvt Ltd. The textual, graphic, audio and audiovisual material in this site is protected by copyright law. You may not copy, distribute, or use this material except as necessary for your personal, non-commercial use. Any trademarks are the properties of their respective owners. More on Hyderabad, India. Jobs in Hyderabad.