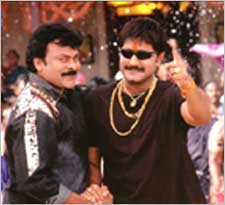 Deepa Menon / fullhyd.com
EDITOR RATING
6.0
Performances
Script
Music/Soundtrack
Visuals
NA
NA
NA
NA
Suggestions
Can watch again
NA
Good for kids
NA
Good for dates
NA
Wait to rent it
NA
Having first-day-first-show tickets to Chiru's latest is not always a good thing. How can you face the delirious mob waiting hopefully outside the theater in the heat and tell them the movie doesn't live up? How can you say this and keep all your teeth? Shankar Dada is no Munnabhai. As an entertainer, it clocks a steady, if not spectacular, 2.5 on the entertainment-scale.

There are two ways to remake a popular film; in spirit or in word. Shankar Dada sticks doggedly to the second approach. Sad, because it had some brilliant elements to play around with: Chiranjeevi's instinctive sense of comedy; the chemistry he shares with his bunch of cronies, Srikanth, Venu Madhav and others; and the immense rib-tickling potential of Hyderabad's local flavor. Instead of working with its natural strengths, Shankar Dada takes the easy way out and does a copy-paste job.

The audience only goes crazy at two points: when Chiru dances, and when Dada distributes gyaan in English. This second sequence is hilarious, with idiomatic gems like "Vulture eats 100 buffaloes, cyclone come, dead" or the more ironic, "In front is crocodile festival". The characters also come alive when any local reference of this sort is made. Otherwise, the film is just an instant translation of Munnabhai MBBS, minus the magic of surprise.

You know the story. Shankar is the biggest don of underworld Hyderabad, who runs a charity hospital for ten days every year, when his parents come visiting. Amma and Naanna (Girish Karnad) think their son has grown up to become a philanthropic doctor, when actually he is the clown-prince of goondadom. When they find out the truth and leave heart-broken, he swears, in a drunken stupor, to become a doctor if it's the last thing he does. And it damn near is too.

Shankar's arch nemesis and the J Dot Asthana of this enterprise is Dr. Ramalingeshwara Swamy or Lingam maava, as Shankar likes to call him. Paresh Rawal does what he can, but he's neither as pompously authoritative nor as funny as Boman Irani. Lingam maava is the dean of the medical college and has a daughter that Shankar has his heart set on, Sunita (Sonali Bendre). So our hero's ultimate ambition is to pass all his exams and get hitched with his enemy's daughter.

With a little help from his bhai log, Shankar manages both feats and spends the rest of his time going about college, handing out hugs and good cheer. Srikant plays his Man Friday, ATM (Any Time Murder) with style, and a great tapori acccent.

Shankar Dada MBBS differs from the original for certain obvious reasons. For one thing, this movie's ending has a bit of a twist, mainly to insert a few stunts. Some the special effects in this bit are clumsy, and it works mainly because Chiru gets to flex those muscles.

Secondly, the presence of a 'mega star' tips the scales to make the film more hero-oriented. Every song and almost all scenes are Chiru's. He carries them off with total ease; just wish he had more to work with. For best results, avoid all comparisons with the original. If you can manage to do this, please tell us how.

ADVERTISEMENT
This page was tagged for
midhunam movie hindi dubbed
100 vultures one cuclone sankardada mbbs
shankar dada mbbs full movie in telugu movierulz
movierulz shankar dada mbbs full movie
shankar dada mbbs
Follow @fullhyderabad
Follow fullhyd.com on
About Hyderabad
The Hyderabad Community
Improve fullhyd.com
More
Our Other Local Guides
Our other sites
© Copyright 1999-2009 LRR Technologies (Hyderabad), Pvt Ltd. All rights reserved. fullhyd, fullhyderabad, Welcome To The Neighbourhood are trademarks of LRR Technologies (Hyderabad) Pvt Ltd. The textual, graphic, audio and audiovisual material in this site is protected by copyright law. You may not copy, distribute, or use this material except as necessary for your personal, non-commercial use. Any trademarks are the properties of their respective owners. More on Hyderabad, India. Jobs in Hyderabad.