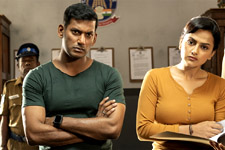 Anil Bandhakavi / fullhyd.com
EDITOR RATING
4.5
Performances
Script
Music/Soundtrack
Visuals
5.0
3.0
5.0
6.0
Suggestions
Can watch again
No
Good for kids
No
Good for dates
Yes
Wait for OTT
Yes
There's a flood of crime-action thrillers coming our way, and Chakra goes after the cybercrime world. Directed by M S Anandan, this film launches itself into the story with a reminder that, in a highly connected world, your data is always at risk of being compromised. The relevance of the premise, however, quickly fizzles out in a movie that gets distracted in possibly trying to start up a franchise.

It's the morning of India's 73rd Independence Day, and the police are planning security according to a plan, with forces clustered in areas where large masses will gather for celebrations. Then, it begins: a mass heist covering three localities in the city, with targets chosen at random. Police station phones are blaring as the force is bamboozled by the robbers who are moving in an unpredictable pattern leaving them a step behind in the chase. The heist concludes at 49 homes belonging to senior residents.

Gayathri (Shraddha Srinath) is a senior officer on the force who's just right for the job, but she's aware she won't be able to grapple with the complexity of the case on her own. She knows there is only one person who can take a case like this to the end. She reluctantly dials Chandru (Vishal), a soldier, who's already on his way to Hyderabad - his preparedness and proactive nature are reaffirmed. Gayathri and Chandru have an unresolved case of love on the rocks, but neither is disillusioned on the line of duty.

Chandru, Gayathri and team quickly figure out that the mastermind behind the heist has managed to hack into the database of an online services company called Dial For Help. Service requests on the database are directed to a phone number that the robbers use, and so they are able to pull off a highly coordinated attack. It is also witnessed that the sequence "00100" is left at the crime scenes, which Chandru quickly decodes as symbolism for the queen's crown in chess. The mastermind is female.

Chakra's focus seems to get stuck in establishing and showing off its fantastic characters. The G I Joe-like heroic figures on both the good and the bad sides are continuously thrust in your face, engaging in dialogue that makes very little effort. Most of the investigation process gets too caught up in showing you how young, sexy and cool these guys look. All of this with a sprinkling of ultra-modern touchscreen gadgets and some esoteric tech lingo overshadows the thrill of the chase. In any case, why even follow the trail when Chandru is going to deliver a boastful monologue in the end, explaining to Leela the whole strategy that he applied in running her down?

The chase itself lacks excitement. There are no memorable action-packed sequences except for a couple of stock fights. There is not even a chase scene with superhero stunts which is a go-to cliché for a film like this, and a necessary tool considering the theme they're going for. Rather than giving you any real action, Chakra mostly lingers on the brink of action.

Ultimately, the missing element in this film is drama. The attempt to make an intellectual mind-boggler falls flat with the story not going far beyond demanding your blind faith in the virtues of its characters. Well, at least Anandan and team do not drag the ordeal for too long - the movie is just over two hours long. However, they do seem to suggest a sequel in which, maybe, they'll do a better job pinning you down to your seat.
Share. Save. Connect.
Tweet
CHAKRA (TAMIL) SNAPSHOT 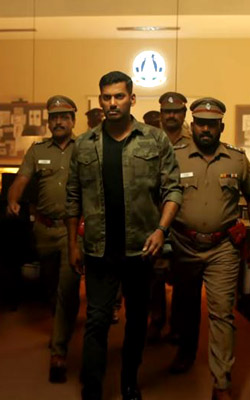 ADVERTISEMENT
This page was tagged for
Chakra (Tamil) tamil movie
Chakra (Tamil) reviews
release date
Vishal, Shraddha Srinath
theatres list
Follow @fullhyderabad
Follow fullhyd.com on
About Hyderabad
The Hyderabad Community
Improve fullhyd.com
More
Our Other Local Guides
Our other sites
© Copyright 1999-2009 LRR Technologies (Hyderabad), Pvt Ltd. All rights reserved. fullhyd, fullhyderabad, Welcome To The Neighbourhood are trademarks of LRR Technologies (Hyderabad) Pvt Ltd. The textual, graphic, audio and audiovisual material in this site is protected by copyright law. You may not copy, distribute, or use this material except as necessary for your personal, non-commercial use. Any trademarks are the properties of their respective owners. More on Hyderabad, India. Jobs in Hyderabad.