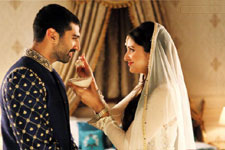 Kritika Deval / fullhyd.com
EDITOR RATING
5.0
Performances
Script
Music/Soundtrack
Visuals
7.5
4.0
5.0
7.0
Suggestions
Can watch again
No
Good for kids
No
Good for dates
Yes
Wait for OTT
Yes
Love hastened by the magic of food is a trope that works for celluloid as well as it does for cellulite... ummm, we mean, real life. Unless (apparently in both cases) you start talking dowry. You see, despite the fact that it has all of the ingredients you'd imagine when picturing the perfect Bollywood rom-com, Daawat-E-Ishq manages to take all of those ingredients, and adds in that little something extra (dowry troubles) to completely ruin the flavor in a vague but distinct manner.

We begin in Hyderabad, with Gulrez (Parineeti Chopra) and her woes of an imminent marriage. Gulrez is a college-going girl with dreams of studying in the US, but her father Abdul Qadir (Anupam Kher) is having none of it, choosing instead to try and make his daughter, and her dreams, someone else's problems. Gulrez goes along with her father's plans, but is thoroughly disillusioned by men seeking to be bought rather than wedded. The last straw for Gulrez is when her boyfriend turns out to be yet another dowry-seeker.

She then comes up with a Plan that includes a trip to Lucknow, pretending to be rich, and getting some gullible fool stuck in a fake dowry case. All she needs is her father's help, who goes along with it easily enough for someone who was cringing at an act of corruption at his workplace not half-an-hour ago.

Come Lucknow, and we are introduced to Tariq (Aditya Roy Kapoor), a bumbling and uncouth kebab-place owner - sorry, oldest-kebab-place-in-Lucknow owner - and the man of Gulrez's decidedly disingenuous dreams. And the rest, as they say, is history, if history were something you keep wanting to turn your vacuum cleaner on. Oh, wait. It is.

The thing about Daawat-E-Ishq is that it never lets its characters know who they actually are, rendering said characters as confused as their audience. For instance, both the fact that Abdul Qadir is so insistent on putting a full-stop to his daughter's education, and his willingness to go along with a plan as unscrupulous as it is shaky (something he surely knows considering that he is a lawyer's clerk), are thoroughly inconsistent with his behavior during the rest of the film. There is no good reason for a girl who knows her mind as well as Gulrez seems to, to victimize herself to such an extent that the whole dowry plot becomes justifiable. There is even less reason for Tariq to forgive and forget just in time for yet another interminable song-and-dance.

As far as the food is concerned, it is nowhere near as much a part of the story as to warrant being featured in the title. It is more like a side character. Like if Daawat-E-Ishq were a perfectly good biryani ruined by too much seasoning, and the Daawat part were the garnish to make the whole thing seem palatable.

The sad part is, you get just enough glimpses of the rom-com that could've been to tease you into staying through yet another jarring scene. Parineeti Chopra is as appealing as ever, jauntily trying to make sense out of her incomprehensible character. Anupam Kher is pretty sincere and shares a better chemistry with Chopra's character than Aditya Roy Kapoor. Roy Kapoor, on his part, shows that he can do more than just look really pretty on screen, which was important because the costume department apparently tried their best not to let him depend on his looks. The rest of the cast is pretty good, too, and performances are not ever a problem with the film.

The music is thoroughly mediocre. The camerawork on the other hand is just as much of a treat to the eyes as you would've imagined.

In all, Daawat-E-Ishq is just good enough for you to wish it were better, while consistently keeping that hope out of reach. Recycle your Julia Roberts stash for date night, and leave this one for when it turns up on TV.
Share. Save. Connect.
Tweet
DAAWAT-E-ISHQ SNAPSHOT 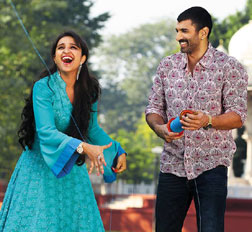 See Daawat-E-Ishq full details
DAAWAT-E-ISHQ USER REVIEWS
1 - 1 OF 1 COMMENTS
POSITIVE  |  NEGATIVE |  NEWEST  |  OLDEST  |  MOST HELPFUL  |  LEAST HELPFUL
adithya on 28th Sep 2014, 10:01am | Permalink
This movie totally revolves around Hyderabad and Lucknow. Parineethi works as a sales girl in Hyderabad, and dreams of an career in fashion designing in the US. Her father Anupam Kher wants his daughter to get married to highly educated person. But he can't afford the dowry they seeks. Due this reason Parineethi gets rejected at several times of alliance. Then after she falls in love with a guy, and they want to get married. They arrange their parents to meet and talk about marriage.
The guy's parents seeks dowry as help and demand a sum of Rs.1 crore.
At that very moment Parineethi decides to teach a lesson for every one who seeks dowry .
She and her father made up fake names and go to Lucknow and keeps an interviews for all grooms.
During the interview she films the grooms parents asking dowry and wants to blackmail them with section 498, and make a settlement for money by which she can go to US.
During the interview she picks Aditya Roy Kapoor, and makes him ready for the marriage(without witness). Aditya's family demands a sum of Rs. 50 lacs, but he doesn't like to take dowry for that reason he himself gives the money to her which his parents demanded and asks her to give that money as dowry.
Their she feels shame on what she is doing for his true nature. After their marriage she betray Aditya and leaves from Lucknow to Hyderabad and put a case on them for dowry and makes a settlement of money.
Aditya's family gives the settlement amount to her. She takes that money and come back again to Hyderabad.
Aditya comes to Hyderabad in search of her. Their Parineethi realizes his true love and wants to give his money back.
In the railway station, she finds Aditya searching for her. She wants to give back the money to him. After giving the money to him, she tells him why she did that and wants him to forgive her. Aditya realises that she did the right thing and forgives her.
At the end the they both get married with out dowry.

ADVERTISEMENT
This page was tagged for
daawat-e-ishq hd movie
Daawat-E-Ishq hindi movie
Daawat-E-Ishq reviews
release date
Aditya Roy Kapur, Parineeti Chopra
Follow @fullhyderabad
Follow fullhyd.com on
About Hyderabad
The Hyderabad Community
Improve fullhyd.com
More
Our Other Local Guides
Our other sites
© Copyright 1999-2009 LRR Technologies (Hyderabad), Pvt Ltd. All rights reserved. fullhyd, fullhyderabad, Welcome To The Neighbourhood are trademarks of LRR Technologies (Hyderabad) Pvt Ltd. The textual, graphic, audio and audiovisual material in this site is protected by copyright law. You may not copy, distribute, or use this material except as necessary for your personal, non-commercial use. Any trademarks are the properties of their respective owners. More on Hyderabad, India. Jobs in Hyderabad.