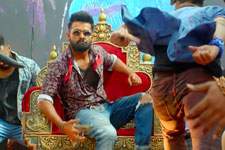 Neema Pramod / fullhyd.com
EDITOR RATING
5.5
Performances
Script
Music/Soundtrack
Visuals
7.0
2.5
5.5
5.5
Suggestions
Can watch again
No
Good for kids
No
Good for dates
No
Wait for OTT
Yes
The more the number of hip-sounding, scientific terms used, the smarter the film will appear, directors increasingly seem to think. While it was Vanishing Twin Syndrome / Alien Hand Syndrome in Savyasachi and Porphyria in Surya Vs Surya, iSMart Shankar features memory transfer from a dead person to a living one. Sure, the theme by itself shouldn't make us derisive - and it doesn't. As always, it's the execution.

The film opens at a science conference where Sarah (Nidhi Agerwal), a neuroscientist, speaks about her research in this area. But soon enough, the movie changes tracks as it moves to the hero, "iSmart" Shankar (Ram Pothineni), as he is escaping from prison with cops hot on his heels. But as is the norm, Shankar has the cops (with guns) running for their lives with a few punches and a couple of punch dialogues delivered in Hyderabadi slang.

The mandatory flashback that follows tells you a little more about Shankar - he's a small-time thug who lands in a soup when he murders a politician (his character arc doesn't really go beyond that). The high-profile murder is being investigated by CBI-officer Arun (Satyadev), who happens to be Sarah's boyfriend. He manages to crack the case, but loses his life in the process. This is where Sarah and her knowledge of memory transfer come in, intertwining the lives of Arun and Shankar in a way they never foresaw.

In the middle of all this hullabaloo is the romantic track. Well, two, actually. While the one between Arun and Sarah is sweet while it lasts, the same cannot be said for that between Shankar and Chandini (Nabha Natesh), which is as disturbing as they come. Sample this - Chandini overhears Shankar describing her anatomy using a turkey analogy to his friend. He adds that he wishes to slap her often as her face is very cute when she is angry. When Chandini, justifiably, explodes in anger, Shankar chases her into her house, making her call the cops and complain of a rape attempt. By the time they come, however, she has fallen in love with him. Well, we are living in a time where slapping and kissing without consent are labeled as acts of "deep love", after all. Who can blame the audience for hooting and clapping at these scenes?

Once the roles of the women as the love interests are established (Sarah, to her credit, is a little more than just that), they conveniently disappear from the narrative, only to appear every now and then in the terribly misplaced songs - where they are either rolling over sand or gyrating their hips to Mani Sharma's peppy soundtrack. And not to forget, show skin. Needless to say, the audiences go gaga.

The sci-fi part of the film held a lot of promise. There were a lot of questions the film could have addressed. Does the possibility of memory transfer mean immortality for mankind? Is it morally correct to sacrifice the life and memories of one man to serve a greater person? Is it possible to love someone the same way if he is in a different body? But the movie steers clear of such complexities, instead comparing memory transfer to a brain with a dual SIM, where any SIM can get activated at any point of time.

However, despite everything, the film manages to keep you engaged. It follows the template of a Puri Jagannadh masala movie to the T, which works tremendously in its favour. After delivering a string of duds in the last couple of years, Puri has returned to his trademark style which is bound to appease his fans. The basic storyline, if you take away the sci-fi part of it, is as old as the hills, yet Puri manages to package it in a way that the audiences will enjoy. The action sequences are well-shot, too - and Mani Sharma's score adds to the overall impact, especially in the climax.

But above all, it is Ram's performance which truly makes the movie. The film showcases him in a different avatar, and it works to a large extent. His dialogue delivery, his dance moves, his physique, all make the movie much more watchable than it would have been otherwise. He plays to the gallery so well that you can almost forgive the shortcomings of the film.

Among the other actors, Sayaji Shinde and Ashish Vidyarthi make their presences felt, while Satyadev makes in impact with his quiet, restrained performance. As mentioned, the heroines are not much more than eye candy, and judging by the whistles and claps in the hall, they have done their jobs well.

If you're a fan of the Puri Jagannadh brand of cinema, possess a healthy pair of eardrums which can withstand high levels of noise, and are looking to have few hours of mindless fun, iSmart Shankar might just be the movie for you. Just don't go in expecting anything more.
Share. Save. Connect.
Tweet
ISMART SHANKAR SNAPSHOT 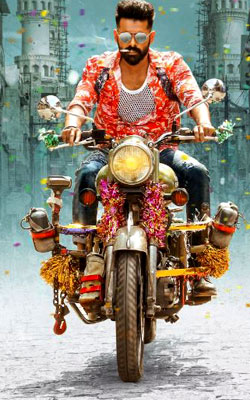 ADVERTISEMENT
This page was tagged for
movierulz ismart shankar full movie
movierulez.com smart shankar
ismart shankar movierulz
movierulz.com telugu ismart shankar
movierulz ismart shankar
Follow @fullhyderabad
Follow fullhyd.com on
About Hyderabad
The Hyderabad Community
Improve fullhyd.com
More
Our Other Local Guides
Our other sites
© Copyright 1999-2009 LRR Technologies (Hyderabad), Pvt Ltd. All rights reserved. fullhyd, fullhyderabad, Welcome To The Neighbourhood are trademarks of LRR Technologies (Hyderabad) Pvt Ltd. The textual, graphic, audio and audiovisual material in this site is protected by copyright law. You may not copy, distribute, or use this material except as necessary for your personal, non-commercial use. Any trademarks are the properties of their respective owners. More on Hyderabad, India. Jobs in Hyderabad.