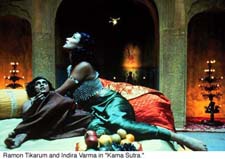 Avishek Gupta / fullhyd.com
EDITOR RATING
5.0
Performances
Script
Music/Soundtrack
Visuals
NA
NA
NA
NA
Suggestions
Can watch again
NA
Good for kids
NA
Good for dates
NA
Wait for OTT
NA
From the depths of the id stems a carnal desire to satiate which worlds are lost and won. Mira Nair, with her 'Kamasutra', has tried to grip this particular thought, but fails to latch onto it properly. Highly controversial - courtesy the much hyped inflammatory theme - the movie fails to live up to its expectations. Barring a few brief spasms of brilliance, it turns out be just another 'adults-only' flick, with more food for the eye than for the mind.

Kamasutra is a plain story of 2 girls in battle for the favors of the same man, the king (Naveen Andrews). They believe that the way to a man's heart is not through his stomach but is a couple of inches below. Tara (Sarita Chaudhary), who is married to the king, fails to hold his attention for long with her physical charms. And the nubile maiden Maya (Indira Verma), fresh out of a school run by Rekha that specializes in teaching the art of pleasing the man, seduces him so successfully, he falls for her hook, line and sinker.

What follows in this triangular romance is just a lot of bitching between the two females, until the introduction of a third corner. Maya's ex-lover, a gifted sculptor, is invited by the king to immortalize his pet play-toy in stone. With all his desires inflamed, this poor guy is hardly vertical long enough to do any sculpting.

And then the makers suddenly realize that they have to wrap it all up. So we are thrown into a bizarre climax, wherein the love affair of Maya is trampled underfoot a charging elephant, and some Shah of a neighboring state sets siege to the city and ravages the whole kingdom. And in the backdrop of the flaming city the movie ends on a symbolic note.

All except Sarita Chaudhary impress by their performances, and that is the saving grace. The script keeps getting away from Nair only to be reigned back into control at the last moment, and proves to be a jumpy ride throughout. The lovemaking scenes, in graphic detail, are bold and graceful, but thoroughly unnecessary.

The background score by Mycheal Danna is gripping and done in great style, but the screenplay leaves much to be desired. The dialogues are awfully written and actually jar in the thick of such a strong theme.

All said, the movie, too, goes down with the kingdom that it features. With a king whose womanizing can put any Don Juan De-Marco to shame, that is not a surprising end to the city. But with Mira Nair calling the shots for the movie, the outcome is a rather downer!
Share. Save. Connect.
Tweet
KAMASUTRA SNAPSHOT

ADVERTISEMENT
This page was tagged for
kamasutra book in telugu language:en
Full Kama Movie
kamasutra book summary hindi movie
Kamasutra hindi movie story
kamasutra book summary hindi full move
Follow @fullhyderabad
Follow fullhyd.com on
About Hyderabad
The Hyderabad Community
Improve fullhyd.com
More
Our Other Local Guides
Our other sites
© Copyright 1999-2009 LRR Technologies (Hyderabad), Pvt Ltd. All rights reserved. fullhyd, fullhyderabad, Welcome To The Neighbourhood are trademarks of LRR Technologies (Hyderabad) Pvt Ltd. The textual, graphic, audio and audiovisual material in this site is protected by copyright law. You may not copy, distribute, or use this material except as necessary for your personal, non-commercial use. Any trademarks are the properties of their respective owners. More on Hyderabad, India. Jobs in Hyderabad.