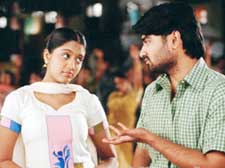 Priyanka Pulla / fullhyd.com
EDITOR RATING
7.0
Performances
Script
Music/Soundtrack
Visuals
NA
NA
NA
NA
Suggestions
Can watch again
NA
Good for kids
NA
Good for dates
NA
Wait to rent it
NA
Muddula Koduku builds up expectations with its well-chosen storyline. Well-chosen, not created - because the story itself is an old one, the kind kids will finish for you if you tell them half of it. The story of an outwardly ugly man who realizes that inner beauty is the only kind there is.

Unfortunately, Muddula Koduku slips up with its almost epically simplistic treatment of a complex issue. If it didn’t, it could have run for the Oscars. Once a good story is chosen, the law of averages ensures the script is no great shakes.

But to be fair, the film turns out to be a delectably sweet family movie with an absolutely rocking sense of clean humor. Yes, just the adorably wry rejoinders spoken by lead actor Venu (Ravikrishna) are worth watching this movie for. Like, when depressed about his badly scarred cheek, Venu complains to his friend, “Gandhiji oka champa meda kodte inko champa ivva mannaaru kada? Nenu koda ade cheste yavvaru kottatledu, guru.”

The movie is packed to spilling with such gems. And that turns a lead actor who might otherwise have put you off with his depressive temperament, into a cutely sullen, childlike character you sympathize and wish well for.

The story is about Venu, a factory worker young of age and good of heart, but with a face badly disfigured from a childhood accident. He is a loving son and a generous friend who manages to remain sweet-natured despite the teasing, taunts and humiliation he often suffers on account of his face. He takes it all into his stride with innocent indignation; sulking a little, hurting a little and then getting up irrepressibly, pacified by the loving reassurances from his family.

The day comes when he discovers plastic surgery and how it can be the answer to all his problems. He is so entranced by the idea, that he even gets an artist to paint his face without scars, and cries joyful tears when he sees it. The plastic surgeon tells him he needs Rs. 1.5 lakh for the surgery, but through his entrancement Venu decides to save it up somehow, and fulfill his dream of being like everyone else.

His mother, played with a calm assurance by a maternally plump Revathy, doesn’t object since she looks at this as a chance for him to fulfill what he wants for the first time in his life. His sister too, who he supported from a young age after the loss of their father, encourages him and rejoices in his dreams.

But in trying to garner funds for his surgery, Venu’s character metamorphoses. From a generous lad who cared little for himself, he becomes a stingy, irritable person hanging on to his money with his life. He takes up a part time job as a pizza delivery boy, and with a mask on his face all the time at the restaurant, he enchants a girl with his mannerisms. His dreams start growing bigger, and he starts pushing harder to fulfill them.

While simplistic, all this is nevertheless charmingly handled by the director. Venu becomes the eager, selfish child in every one of us. Who wants his rich dreams, and won’t let anyone mess with them.

The story ends with a heart-rending twist that smashes through all the clichés and simplism up till that point, to bring Venu back to a discovery of his old, carefree and loving self. This final tilt somewhat forgives the movie all its transgressions, or lack of them. Like the single ornate decoration that turns a basic garment classy, this ending saves the story from drowning into triteness.

Those who know better will always wish the movie didn’t play so safe, and talked about more than the black-and-white, folkloric manifestations of a psychological issue. By steering clear of the complexities, the film runs more like a bedtime story. A sweet bedtime story with a pleasant moral, but one kids will grow out of rather soon.

All said and done, Muddula Koduku is worth a watch once. Like the fearful sloth bear caricaturized into a flat-snouted, cuddly teddy bear, this story is the agreeably domesticated version of a harsh real life situation. And that’s not too bad for a 2-½ hour outing in a theater.
Share. Save. Connect.
Tweet
MUDDULA KODUKU SNAPSHOT

ADVERTISEMENT
This page was tagged for
Muddula Koduku telugu movie
Muddula Koduku reviews
release date
Ravikrishna, Gopika
theatres list
Follow @fullhyderabad
Follow fullhyd.com on
About Hyderabad
The Hyderabad Community
Improve fullhyd.com
More
Our Other Local Guides
Our other sites
© Copyright 1999-2009 LRR Technologies (Hyderabad), Pvt Ltd. All rights reserved. fullhyd, fullhyderabad, Welcome To The Neighbourhood are trademarks of LRR Technologies (Hyderabad) Pvt Ltd. The textual, graphic, audio and audiovisual material in this site is protected by copyright law. You may not copy, distribute, or use this material except as necessary for your personal, non-commercial use. Any trademarks are the properties of their respective owners. More on Hyderabad, India. Jobs in Hyderabad.