The Pursuit of Happyness Review 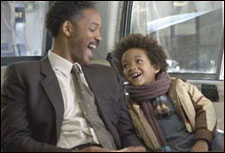 Samrat Sharma / fullhyd.com
EDITOR RATING
6.0
Performances
Script
Music/Soundtrack
Visuals
NA
NA
NA
NA
Suggestions
Can watch again
NA
Good for kids
NA
Good for dates
NA
Wait for OTT
NA
Watching The Pursuit of Happyness reminded me of Earth's sole entry in The Hitchhiker's Guide To The Galaxy – Mostly Harmless. Another connect that I could make between the two is that while H2G2 (as it is known among us geeks) was a fine book that included biting wit, searing commentary and plain oddball fun in one epic literary work, it's the listless film that will be more popular amongst the masses. Similarly, while Chris Gardner's story may have been that of true grit and strong will, his story will always be known by this Oscar-baiting film.

There is nothing wrong with making a film that panders to the Oscar jury and the plays on the emotional quotient of the audience deliberately, but in doing so, the film has made Gardner a bit of a silly man. I am not entirely well-versed with Gardner's story, but this film portrays him as a man who is very obviously doing the wrong thing, and you just can't cheer for the guy.

But ultimately, this film is not about will, but Will, and Smith is the only reason you should see this film. Finally an answer to why he gets all those parts to play where he basically saves the world time and time again. He has such a larger than life charisma, that this film becomes a touchstone for his ability to shoulder a film.

The movie is based on the true story of Chris Gardner, a salesman living in San Fransisco with his son and wife in the 1980s. The setting of the film doesn't matter too much, as apart from the odd hairdos of Smith and his son, the and a few TV clips, it's no different in its atmosphere. The period setting is mostly ignored, and the only focus remains Gardner's job. He sells weird and expensive scanners to doctors, and because they are weird and expensive, they don't sell too well.

The family is going through hard times, and when the wife (a remorseless Thandie Newton) leaves him and moves to be with her family, Gardner insists on keeping their son (sweet, yet poignant Jaden Smith) with him. That to me is the first of a string of bad choices Gardner (the protagonist in the feature, not the real man) makes. Instead of letting his son grow up in a supportive and well-to-do environment, he insists on keeping him with himself.

While that may still be understood by us Hindi movie aficionados (Kaash, anyone?), the next decision as portrayed is simply bizarre. He enrolls in a 6-month internship program in stock-brokering, which pays nothing and is full-time. This is even more bizarre when I found out that in real life the program paid a small stipend to Gardner.

The rest of the story follows Smith and Smith Jr. as they discover new lows and try to stick together in face of increasing difficulties until such time as Pa graduates from the program. This, then, is not a film about the pursuit of happiness. This becomes one man's pursuit of money and success, and how he puts his son through unbelievably harsh times to achieve that.

One of the biggest Oscar-selling moments in this film is the part where the father and son get evicted from the hotel they are staying at and have to spend a night at a subway station bathroom. That just falls flat for me – he could have done anything except take the program at that point, and not have his child sleep at a restroom floor.

It's difficult to ignore this kind of politics in the film, especially if seen from the Indian perspective. In the real sense, we have seen the poor and the destitute, and I see no reason for an educated, sane and able-bodied man to stoop as low as living at the homeless shelter with his son. Even in the filmi sense, you see no desperation in his actions, no last minute grab at anything, even if it demeans him to get his son to stay one night more at a better place. Sure, he loves him, but that's not enough when he insists on being plain nuts.

To add to the conundrum of being extremely unbelievable in its extreme portrayal of Gardner's life, the film also has the added burden of a star-oriented screenplay to carry. Jaden and Will, both Smiths, are the only people who matter in the film, and the screenplay resolutely refuses to give any scope for any other characters to be developed. Everybody else is kept at an antiseptic distance, and is used to present plot points rather than being a part of a well-inhabited world.

The good thing to come out of that is the sheer presence of Will Smith and the force of his charisma that carries the film forward. He gives it his all as a charming salesman, a scared dad, and a strong-willed American dream. The desperation of his character shows through even in the small touches of the film, and it ultimately becomes the sort of performance that almost makes up for the faults in the screenplay.

Jaden Smith not only gives in a very poignant and fresh performance, his presence is pivotal in bringing out the touching moments in Will Smith's performance. Having his real son in his arms inside the subway station restroom must add to the sense of dread for that moment. This is great chemistry and an unbelievably restrained acting display on part of the Smiths, and all cheers to both of them for making a maudlin film extremely watchable.

This film is mostly harmless in the manipulative, Academy-friendly way it presents itself, and can be watched by just about anyone as a piece of entertainment that works because of the leads yet will soon be forgotten. But the message-mongering it tries to do, and the absolute American Conservativism/Republican politics of the film, make it a beguiling piece of entertainment. I may have been reading too much into it, but then again, it's not something you can ignore.

But if you can, faults and all, go for decent entertainment, and a few true heartfelt moments.
Share. Save. Connect.
Tweet
THE PURSUIT OF HAPPYNESS SNAPSHOT

See The Pursuit of Happyness full details
THE PURSUIT OF HAPPYNESS USER REVIEWS
1 - 4 OF 4 COMMENTS
POSITIVE  |  NEGATIVE |  NEWEST  |  OLDEST  |  MOST HELPFUL  |  LEAST HELPFUL
USER RATING
8.7
13 USERS
Performances
Script
Music/Soundtrack
Visuals
NA
NA
NA
NA
Can watch again - NA
Good for kids - NA
Good for dates - NA
Wait for OTT - NA
Ambika Joshi on 21st Mar 2007, 3:45am | Permalink
Brilliant movie!
RATING
10
Joe Black on 12th Mar 2007, 12:33pm | Permalink
Donno what happens to a certain reviewers as they go long into their career........... but they do falter at times as this one does ........ After i've seen this movie which was a month ago, i thought, a few people will like this one very much, most of them will think its quite good, fewer will say its ok, even the insane one will like it atleast by the infinetesimal amount possilbe .......... but alas the universe is indeed a strange place as Mr. Douglas Adams said .........
RATING
8
Priyanka Rao on 12th Mar 2007, 10:53am | Permalink
This is a very good movie and seems Samrat had a very bad day with his wife while writing this review. My view - Go for it any cost...
RATING
8
Rahul on 12th Mar 2007, 2:56am | Permalink
I am surprised to see GHost Rider getting the same rating as this! Either the reviewer is an amateur, or he/she does not understand movies!? Either way, Pursuit is a commendable movie - one that (should) cross cultural boundaries. Go watch is 2day!
RATING
8
LEAVE A COMMENT
fullhyd.com has 700,000+ monthly visits. Tell Hyderabad what you feel about The Pursuit of Happyness!
MORE MOVIES
Latest Reviews
Don't Worry Darling
Vikram Vedha
Ponniyin Selvan - 1
Naane Varuvean
Nene Vasthunna
more
Krishna Vrinda Vihari
Saakini Daakini
Where the Crawdads Sing
Everything Everywhere All At...
Aa Ammayi Gurinchi Meeku Che...
Brahmastra: Part One - Shiva
Oke Oka Jeevitham
Brahmastra: Part One - Shiva
Ranga Ranga Vaibhavanga
First Day, First Show
Contemporary Reviews
Salaam-E-Ishq
Akkada Ammayi Ikkada Abbayi
Malamaal Weekly
Hattrick
Party
more
Gangotri
Ajnabee
Lajja
Ekkadikelthundo Manasu
The Skeleton Key
Champion
Kamasutra
Anukokunda Oka Roju
Subhash Chandra Bose
Random Reviews
Singamalai
Mahadevi
Prapanchaniki Okkadu (Casino...
Vijayadasami
Confessions Of A Shopaholic
more
Legion
Cowboys & Aliens (Hindi)
David Billa
Billa 2 (Tamil)
Turbo (3D)
Heropanti
Ishqedarriyaan
Manyam Puli
Chal Mohan Ranga
Jackpot (Telugu)
SEARCH MOVIES
Dissatisfied with the results? Report a problem or error, or add a listing.
ADVERTISEMENT
SHOUTBOX!
{{todo.name}}
{{todo.date}}
[
ip{{todo.ip}}
]
{{ todo.summary }}... expand »
{{ todo.text }} « collapse
First  |  Prev  |   1   2  3  {{current_page-1}}  {{current_page}}  {{current_page+1}}  {{last_page-2}}  {{last_page-1}}  {{last_page}}   |  Next  |  Last
{{todos[0].name}}

ADVERTISEMENT
This page was tagged for
The Pursuit of Happyness english movie
The Pursuit of Happyness reviews
release date
Will Smith, Jaden Smith
theatres list
Follow @fullhyderabad
Follow fullhyd.com on
About Hyderabad
The Hyderabad Community
Improve fullhyd.com
More
Our Other Local Guides
Our other sites
© Copyright 1999-2009 LRR Technologies (Hyderabad), Pvt Ltd. All rights reserved. fullhyd, fullhyderabad, Welcome To The Neighbourhood are trademarks of LRR Technologies (Hyderabad) Pvt Ltd. The textual, graphic, audio and audiovisual material in this site is protected by copyright law. You may not copy, distribute, or use this material except as necessary for your personal, non-commercial use. Any trademarks are the properties of their respective owners. More on Hyderabad, India. Jobs in Hyderabad.